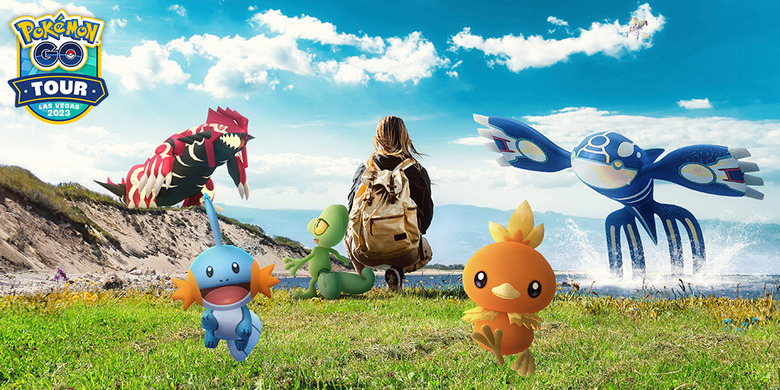 Today, Niantic announced details for Pokémon GO Tour: Hoenn - Las Vegas, taking place from 10:00 a.m. – 6:00 p.m. PST on Saturday, February 18, 2022 and Sunday, February 19, 2022 at Sunset Park. As part of the event, Trainers will encounter Shiny Pokémon and Primal Reversion forms making their Pokémon GO debuts, complete Special Research, access the Ruby vs. Sapphire Challenge, team up with Team GO Rocket and more. From Tuesday, November 29 to Saturday, December 31, early bird pricing for one-day tickets are available for purchase on the Pokémon GO Tour website for $25.00 USD (or the equivalent pricing tier in your local currency, plus any applicable taxes and fees).

Tickets will give Trainers access to exclusive event gameplay and more, including: Secret codes will be hidden throughout Sunset Park. Trainers will need to find them to earn the chance for encounters with Legendary Pokémon.

A Special Research story will only be available to ticket-holding Trainers. Trainers at Pokémon GO Tour: Hoenn: - Las Vegas will be able to take part in an exclusive adventure and work alongside the Team GO Rocket Leaders for the very first time.

Meet-and-Greet: Attendees will be able to meet notable Trainers from the community. More will be announced at a later date.

Trainers will have an increased chance of encountering Shiny* Pokémon originally discovered in the Hoenn region. Ticket-holding Trainers in Las Vegas will be able to access Masterwork Research and have the first chance to encounter Shiny Jirachi. All Trainers will be able to pick between a Ruby or Sapphire badge. The team Trainers pick will shape certain aspects of the event.

Trainers will also be able to enjoy bonuses such as 1/2 Hatch Distance, up to nine additional daily Raid Passes for spinning Photo Discs at Gyms, and more.

*Ticket-holding Trainers at the in-person event in Las Vegas may have increased luck in encountering Shiny Pokémon. Shiny Pokémon are not guaranteed by purchasing a ticket.

From Saturday, February 25, 2023, and Sunday, February 26, 2023, from 10:00 a.m. to 6:00 p.m. local time, Trainers around the world can join the adventure by participating in the accompanying global event: Pokémon GO Tour: Hoenn - Global. In addition to Primal Reversion and the Ruby vs. Sapphire Challenge, Trainers can also look forward to Special Research, access Masterwork Research and more, including:

Special Research: Trainers around the world will be able to enjoy Special Research featuring none other than Rhi from the GO Ultra Recon Squad. Professor Willow has tasked Rhi with researching Hoenn folklore about the Red and Blue Orbs—items which are said to have some connection to Primal Kyogre and Primal Groudon. Special Research will be free.

Trainers will also be able to purchase a ticket to access Masterwork Research* to encounter Shiny Jirachi.