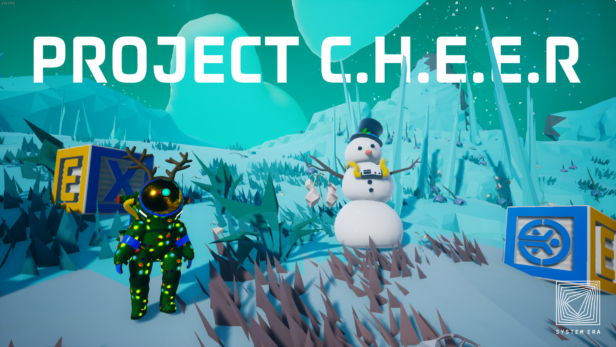 Astroneer has been updated to version 1.26.128.0, which includes the ‘Project C.H.E.E.R update’, and fixes some of the bugs that were present. Check out the full patch notes below.

Container wrecks have been spotted on Sylva, Desolo, Calidor, and Glacio surrounded by various toys and debris. Production-minded Astroneers can create fresh toys via the Small Printer using Scrap and other resources.

It is curious that shipping containers keep crash-landing on planets in the Sylva System around this time each year… what’s going on with EXO’s logistics department? Must be a weird glitch in their subroutines. Maybe that explains the weird containers ERROR//LU-C1D filtration at 63% HelpHelpHelp that have been reported on Sylva, Desolo, and Calidor.

Packaged toys are worth different point amounts when shipped:

EXO supplies useful items and resources along the way to boost your recovery or production efforts. Randomized recurring rewards are available after completing the main event including:

To support event-related communications, special missions have been added that will appear in the Mission Logs of players when a new event is active. Players only need to activate an EXO Request Platform rocket to start the current event and complete the mission.

As with previous years, all package points will go towards unlocking a global total that will grant everyone in the community a FEZANT hat! We will be tracking progress via social media so when you complete the event, you can continue sending rewards to help make sure the gift gets unlocked for everyone!

Multi-colored lights return to adorn the tether lines of intrepid Astroneers! Use them as decorations, in support of your construction projects, or simply enjoy their merry glow