A rather legendary announcement 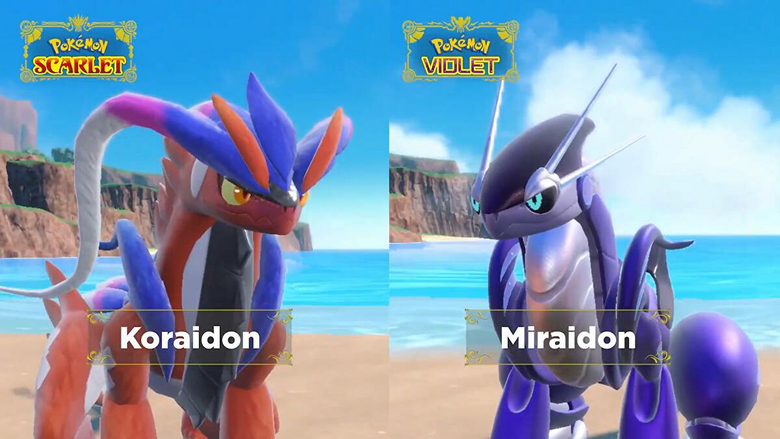 The Pokémon Company International and Nintendo have revealed more details on Koraidon and Miraidon, two Legendary Pokémon of the Paldea region seen in Pokémon Scarlet and Violet.

Koraidon is aware of its own off-the-charts power and behaves as if it never feels threatened by any opponent. While it is wary of humans, it will sometimes play with them since it has a capricious and curious disposition.

In Apex Build, Koraidon can use the mighty strength of its legs to kick off the ground and leap more than 65 feet in the air. As it comes back down, it can use its velocity and its body weight to unleash devastating kicks and body slams.

Koraidon’s Orichalcum Pulse is a new Ability being introduced in Pokémon Scarlet and Pokémon Violet. The sunlight turns harsh when Koraidon enters a battle. In harsh sunlight, Koraidon’s Attack is boosted.

Collision Course is a Fighting-type physical move that Koraidon can learn. Koraidon jumps high into the air, then makes a rapid, spinning dive toward its opponent and slams into them with a large explosion. This move’s power increases more than usual if it’s a supereffective hit. ​ - Category: Paradox Pokémon - Type: Fighting/Dragon - Height: 8’2” (2.5 m) - Weight: 668 lbs. (303 kg) - Ability: Orichalcum Pulse

Though Miraidon seems accustomed to humans, it chooses its company carefully by using its powers of observation and insight to discern a person’s character. It has a calm and collected disposition. Changes in Miraidon’s facial expressions are slight, only visible in the shape and color of its eyes. The robotic nature of Miraidon’s facial expressions will likely make it difficult to perceive the subtleties of what Miraidon is feeling.

In Ultimate Mode, Miraidon floats in the air, maintaining an advantageous position over ground-bound opponents. Its claw and fang attacks are electrically charged, and when Miraidon slams its tail, it can use the energy generated in its internal organs to knock out even the sturdiest of enemies in one hit.

Miraidon’s Hadron Engine is a new Ability being introduced in Pokémon Scarlet and Pokémon Violet. Miraidon turns the ground into Electric Terrain when it enters a battle. While Electric Terrain is active, Miraidon’s Special Attack is boosted.

Electro Drift is an Electric-type special move that Miraidon can learn. Miraidon spins and races forward, zigzagging like a lightning bolt, and hits its opponent with a large electric blast. This move’s power is boosted more than usual if it’s a supereffective hit.