Nomura's start in the game industry! 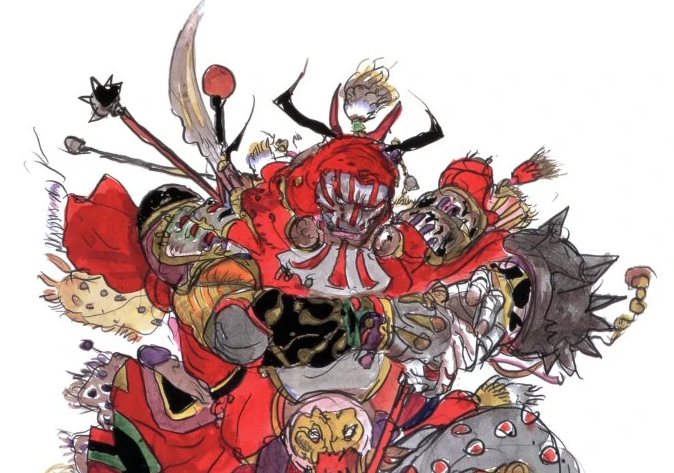 Did you know that Final Fantasy V turned 30 years old on December 6th, 2022? Square Enix did, which is why they’ve been sharing some special features on the game. One of those features in particular gives some insight into Tetsuya Nomura’s Gilgamesh, which Final Fantasy V introduced as a subordinate of the warlock, Exdeath.

In a blog from Square Enix, Tetsuya Nomura himself shared full details on how he created Gilgamesh. Nomura started in the industry as a designer for Final Fantasy V, which means his work on Gilgamesh was one of the first things he did! You can see Nomura’s full breakdown of Gilgamesh below.

FFV‘s 30th anniversary means it’s been 30 years since I first got my start in game development. To think it’s been that long… I struggle to wrap my head around it. Recalling my memories of the time, I didn’t care about being a big character designer or director. I was just a monster designer worrying over how what I was working on compared to the wildly popular monsters of the DQ series. I created things like cactuar and tonberry hoping they’d bring some popularity to FF monsters, and amongst them was Gilgamesh himself.

The development process was entirely different back then, and most monsters had visuals proposed first with their backstories handled after the fact. Personally the monster I most wanted to push for in my FFV sketchbook was this multi-armed magical being of sorts named Gilgamesh who carried a different weapon in each hand. And there was another monster called “Benkei” on a different page of my sketchbook, with many weapons on its back. It was proposed that these two monsters be used as Gilgamesh’s forms pre- and post-transformation. From there he was added to the scenario, and even given exciting extra dialogue and scenes in battle.

As a new member of the team, I remember being really impressed by the way my colleagues skillfully integrated my design into the title. With that, Gilgamesh was born, not just as some grunt to hack away at but with his own unique personality.

By the way, in those days implementation of visual designs into the game programming was done first, so it was later on that Gilgamesh’s visuals came to be based on Mr. Yoshitaka Amano’s art.

Nomura also reflected on Gilgamesh’s appearance in FFVIII, and remarked that “he’s become very popular as he continues to wader the space between dimensions.”