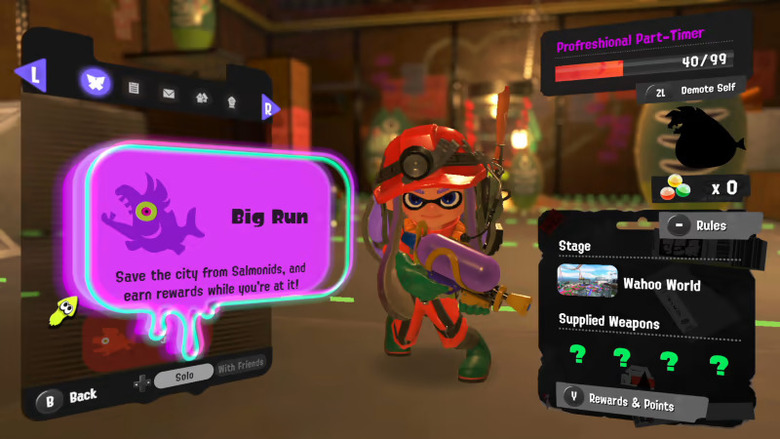 WARNING! The invasion has arrived, and it’s all tentacles on deck to protect Splatsville from a Salmonid infestation! Starting at 7 PM ET today, Dec. 9, and running through 7 PM ET on Sunday, Dec. 11, the special Big Run event for Splatoon 3 for Switch brings one of the biggest co-op events in Splatoon series history!

Splatoon 3 may be known for its fast-paced 4-v-4 Turf War battles, but in this new twist on the co-op Salmon Run mode, players will need to set aside their differences and team up in workforces of four to stop wave after wave of Salmonids from overrunning the city. And unlike regular Salmon Run matches, which take place on special stages, this inaugural Big Run event will see the Salmonid swarms overtaking a huge stage normally seen in competitive modes – the amusement park-themed Wahoo World!

Everyone who slaps on a Grizzco jumpsuit and participates in Big Run will receive a special in-game decoration for their locker. Plus, the number of Catalog Points and Bonus Rewards you can receive will also increase. But don’t even think of slacking off – Grizzco will be tallying your points throughout Big Run, and the very strongest performers will receive rewards that reflect their ranking! Once the event ends, the final Big Run results will be announced.

So, stay on alert – nowhere is safe from the Salmonid menace unless brave Inklings and Octolings work together for the greater Grizz … uh, we mean the greater good.

And don’t forget, Big Run isn’t the only fresh catch in Splatoon 3. The new “Chill Season 2022” just started, bringing with it additional weapons, stages and gear. A new seasonal catalog debuts every three months, so make sure the new catalog rewards don’t slip through your nets!