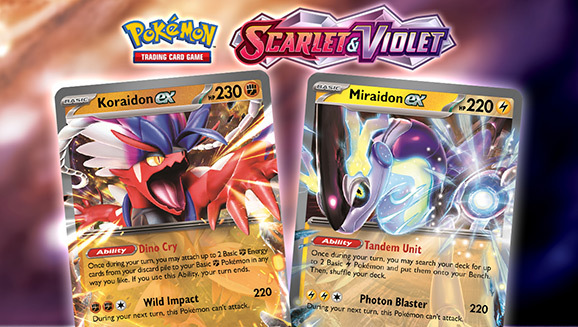 As the first expansion in the Scarlet & Violet Series, initially unveiled during the 2022 Pokémon World Championships, Scarlet & Violet will see the return of the Pokémon ex gameplay mechanic, which will appear in each stage of Evolution and have high HP, as well as powerful attacks and Abilities. However, when a Pokémon ex is Knocked Out, it gives up two Prize cards instead of one.

The Pokémon Company International also introduced several card design improvements that will be implemented starting with the Scarlet & Violet expansion, including:

Yellow borders on Pokémon TCG cards will become gray to match the cards released in Japan, providing a more seamless Pokémon TCG experience around the world while allowing the card artwork to shine even further.

Subcategories for Trainer cards — such as Supporter, Item and Stadium — will appear in the top left corner to be more visible in players’ hands.

Basic Energy cards will display another Energy symbol on the bottom right corner to make it easier to track during gameplay.

Expansion symbols will be replaced by expansion codes and language codes across all cards.