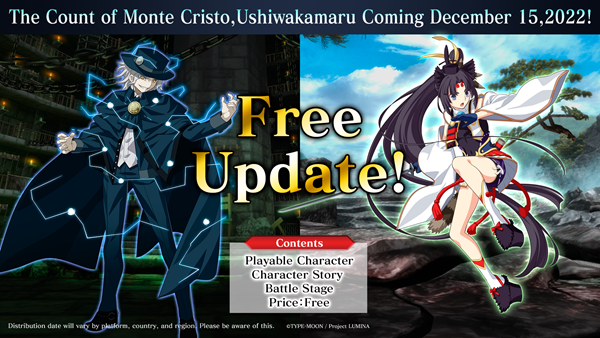 Project LUMINA has announced new playable characters, “The Count of Monte Cristo” and “Ushiwakamaru”, for Melty Blood: Type Lumina. These characters are coming to the game in a free update on December 15th, 2022. In addition, a large-scale update on the same day will add Spanish, French, and Brazilian Portuguese languages (text only).

“The Count of Monte Cristo” and “Ushiwakamaru” are characters who appeared in the smartphone game “Fate/Grand Order”. Now these characters are making their first appearance in Melty Blood: Type Lumina.

The Count of Monte Cristo: The Eternal Spirit of Vengeance, from the edge of love and hate

His battle style branches into a variety of attacks that put pressure on opponents with a powerful rush that leaves no room for escape.

“The Count of Monte Cristo” has many moves with both broad and long ranges. This character excels at battle tactics that rush in to attack when an opponent is trapped, putting him at the advantage.

“The Count of Monte Cristo” also possesses well-balanced offensive and defensive skills. He uses command throws and overhead and low attacks that branch into a variety of attacks to put pressure on opponents, strategically and tactically backing them into a corner. In addition, many of his normal skills also work excellently as placement skills and are powerful when used aggressively.

Use preemptive strikes that create chances for yourself, and wear down your opponents before moving in for the attack!

Ushiwakamaru: Charismatic and a flawless beauty, Ushiwakamaru runs free in the city of the future

A speedy fighter who races freely across the field to take opponents by surprise.

“Ushiwakamaru” has a battle style that is speedy and allows her to run freely around the field to take opponents by surprise, moving in quickly from the ground or the air to toss them around.

She has many moves that allow her to instantly close gaps, and she is able to employ a variety of movements in the air. She is also very adept at breaking through opponents’ guarding with overhead, low attacks, and tricky movements. Her battle style is also great at taking advantage of gaps in her opponents’ defense to quickly and decisively strike them down.

Control the pace of the battle with her highly mobile hit-and-run style and use the whole field to launch an attack!