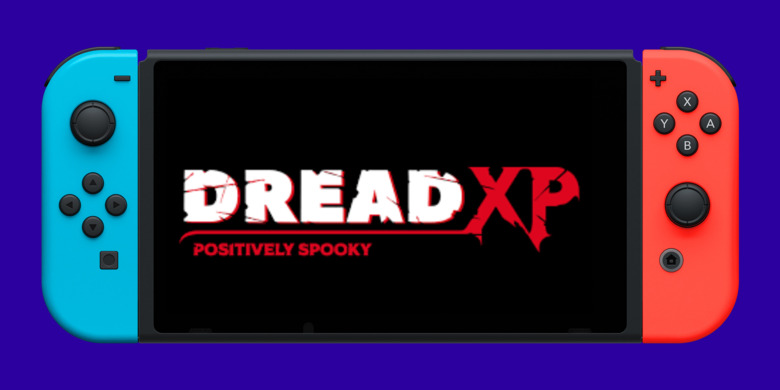 DreadXP — an independent horror publisher and production company — is thrilled to announce that it has founded a new development studio tasked with bringing DreadXP’s library of unique and spooky Windows PC games to Switch. DreadXP’s console port initiative begins with imminent Switch releases of Sucker for Love: First Date, independent developer AkaBaka’s popular Lovecraftian dating sim, and the newly-acquired atmospheric horror game Iron Lung from developer David Szymanski. Both titles arrive on Switch on December 16th, 2022. Other DreadXP titles coming to Switch include The Mortuary Assistant and SPOOKWARE in Q1 2023.

You can find details on all four titles below.

Obsessed with occult rituals, you have finally obtained the last thing you need to summon the eldritch horror that has been haunting your dreams; a strange, bright-pink Necronomicon. You perform the only ritual that doesn’t appear to be insane ramblings, and inadvertently summon Ln’eta, a cute cthulhu-like girl. She agrees to a kiss, on the condition that you perform a few rituals from the book for her first. Looking back at the Necronomicon… all of the other pages suddenly make sense?

Iron Lung is a short dread-driven submarine horror game from the developer of DUSK, The Moon Sliver, and Squirrel Stapler.

Set entirely within a claustrophobic one-man submarine nicknamed the “Iron Lung,” you must blindly navigate an ocean of blood to take photographs of key locations, and hope whatever lives below doesn’t find you.

There is only a single porthole on the sub, and it needs to be closed due to depth pressure, so you have to navigate purely via an incomplete map, proximity sensors, sound, and a primitive external camera which can be used to take the pictures you need to complete your mission, or to get a grainy low resolution visual of what’s happening outside.

Success will require resourcefulness and patience.

Decades ago, every known star and habitable planet mysteriously vanished, along with whatever and whoever happened to be on them, leaving behind an empty universe of asteroids and lifeless moons where the only remnants of humanity are those who were on space stations or starships at the time. With supplies gradually dwindling and infrastructure falling into disrepair, the survivors have spent the subsequent years frantically searching for any trace of remaining natural resources. Up until now they have been unsuccessful…

Then, a mysterious anomaly known as a Blood Ocean (which is exactly what it sounds like) was discovered on an otherwise barren moon. It’s not the first Blood Ocean found since the vanishing, but initial scans show a collection of potentially useful anomalous locations in a deep undersea (underblood?) trench that require further investigation.

And you’re the unlucky sap who gets to investigate, in an aging submarine cobbled together from rusty space station parts.

Find your way to the marked locations, photograph whatever you find there, and try to finish before the sub collapses around you… or you’re discovered by whatever lurks in the blood…

Join the three skelebros -Lefti, Midi, and Righti- on a grand road trip through the cutesy world of the dead. After realizing they wasted their lives watching horror movies, they decide to embark on a big adventure. Spanning across 4 episodes released separately, each containing 3 chapters with their own area, microgames, mechanics, and story!

Meet all sorts of boney folk and get into heaps of trouble. Before you know it, you’ll be well on your way to solving a murder mystery on a cruise ship or starting a high school band to skip out on class.

Challenge yourself with a wide collection of blazing-fast microgames themed around horror tropes. Featuring over a hundred microgames you’re sure to get shaken to your bones!

Each game takes only a few seconds, so you’ll have to use your wits to survive the onslaught of wildly different blood-curling games. From frantically decapitating some poor guy’s head to filing your taxes, the horror never ends!

The very first episode of SPOOKWARE features 60+ microgames scattered over 3 chapters and a prologue. Each chapter features new mechanics, its own story, and an area to explore littered with skele-folk to throw awful jokes at. Episode 1 has an estimated playtime of 5 to 6 hours.

If you’re feeling up to the challenge, try and beat every microgame at least once to add them to your collection. You can even remix them together in an ultimate endless mode that just keeps getting faster! Spooky!

Each microgame is carefully interwoven within the story. Each area features completely new gameplay mechanics to test your microgame skills. Even going as far as changing up control schemes!

One moment you’ll be puzzling away at brain-teasing microgames, another you’ll be mashing to the beat of rhythm-based microgames.

Having completed your degree in mortuary sciences, you have taken on an apprenticeship at River Fields Mortuary. Over the past several months you have logged many hours aiding the Mortician in daily tasks along with learning the ins and outs of the embalming process as well as how to properly handle and care for the deceased.

Perform embalmings, handle the various jobs around the mortuary, and exorcise demonic forces. All in a day’s work.