Octopath Traveler II's Throné and Temenos profiled, plus info on NPCs and more

New details on fresh faces in the sequel 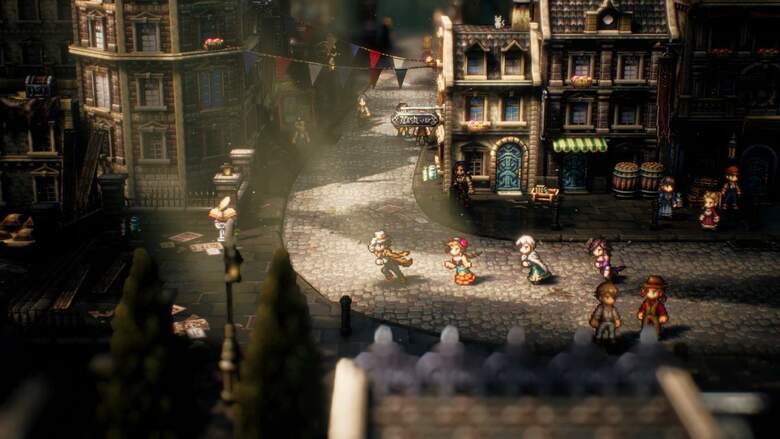 Earlier today, we shared a new trailer for Octopath Traveler II that put the spotlight on Throné and Temenos. Following that release, Square Enix has shared a wealth of information on both characters, as well as other NPCs and more.

To learn more about Throné and Temenos, along with some people they’ll cross paths with and jobs to tackle, read on below.

Your name is Throné Anguis, and you are a thief. Your tale begins in a thrilling city in the Brightlands. You are a member of the Blacksnakes, a thieves guild that controls the city from the shadows. Your job is to steal…and clean. “Not again… Not this stench. Every time I breathe it in, it feels as though my very lungs are rotting… The stench of blood.“ Determined to escape the cycle of bloodshed, you embark on a journey for the keys to your freedom…

In Throné’s adventure, you’ll encounter many fascinating characters, including:

Father is one of the leaders of the Blacksnakes, and a first-rate assassin who oversees the guild’s jobs. He taught Throné the art of assassination when she was young.

The other leader of the Blacksnakes values order and discipline above all. She manages the guild’s members and mercilessly punishes those who fail her.

Pirro is a member of the Blacksnakes. Though somewhat resigned to his life in the guild, he also dreams of rising through the ranks and earning his freedom.

Scaracci is another member of the Blacksnakes. He puts on a bold front, but secretly fears being punished by the guild.

Throné’s adventure begins in the Brightlands

Eastern Solistia is an urban region home to the continent‘s largest city. Blessed by warm sunshine and a pleasant climate, it soon became known as the Brightlands.

Agricultural abundance caused the region to flourish, and people flocked here in droves. Wealth soon followed, and development soon after. Before long, buildings like theaters and game parlors were erected to entertain the ever-growing crowds, and now the light of civilization shines as bright as the sun does overhead.

At the center of all of this lies the Brightlands’ beating heart: New Delsta.

In the east of these lands is Clockbank, an industrial center that has prospered ever since the Age of Discovery.

Each playable character in OCTOPATH TRAVELER II has special Path Actions. These are skills that you can use to interact with NPCs, uncover valuable items and much more.

Each hero has two Path Actions - one that they can use during the day, and one for night. Let’s take a look at Throné’s:

Steal townspeople’s belongings (with a given probability). Fail, and your reputation will suffer.

If Throné’s level is high enough, she can knock someone unconscious. This will allow you to move forward when someone is blocking your path.

Blessing of Darkness automatically triggers at the start of battles at night. This raises the physical attack, elemental attack, and speed of all allies, allowing your party to immediately go on the offensive.

Each playable hero in OCTOPATH TRAVELER II has a Latent Power, which they can use in battle when their gauge is full. Throné’s latent power allows her to act twice in a row, giving her an extra edge in battle. The choice is yours on how best to use the two actions. You can go on the offensive, heal, and more.

Your name is Temenos Mistral, and you are a cleric. Your tale begins in the mountainous region of the Crestlands. Though easygoing in your duties as Inquisitor, that all changes the day a tragic incident takes place in the church. “Oh dear… I suppose it can’t be helped. After all, doubt is what I do.“ Sensing that there is much more to the incident than meets the eye, you set out to solve the mystery left in its wake…

Here are some of the characters you’ll meet during Temenos’s adventures:

Pontiff Jörg is the most prominent member of the Order of the Sacred Flame, respected by all the townspeople. He trusts Temenos and has appointed him Inquisitor.

Crick is a newly anointed Sanctum Knight. He meets Temenos after being tasked with guarding the cathedral, and together they investigate the strange incident within.

Northeast Solistia is a land of mountains and hills.

Perched high atop one stony peak rises Aelfric Cathedral, the center of the Sacred Flame faith. Adherents of this religion’s tenets have worshipped the Sacred Flame that the cathedral houses since time immemorial.

Even through the bitterly cold winter a century previous, the flame continued to warm the hearts and souls of all who visited. In both name and spirit, the Sacred Flame and its church are the divine lords of this land.

At the base of the cathedral lies the small town of Flamechurch. Though its population is small, the townsfolk make a good living providing for the crowds of pilgrims who travel here to visit the cathedral.

If Temenos’s level is high enough, he can Guide someone to lead them around - and even summon them to aid him in battle.

This Path Action lets you force information out of someone by breaking them in battle. Lower your foe’s Shield Points to 0 to break them and obtain the information you seek. You won’t need to defeat your target, so focus on exploiting their weak points!

Moonlight Judgment automatically triggers at the start of battles at night. This blinds foes, which lowers their accuracy and safeguards your party from oncoming attacks. It also decreases foes’ physical and elemental defense, giving you the upper hand.

When Temenos’s power gauge is full, he can use Judgement. On the turn Judgment is activated, all of Temenos’s attacks will lower enemy Shield Points. Combine this with boosted attacks or multiple-hit skills and he can break an enemy in a single turn.

Each traveler sets out with a primary job - for example, Thief and Cleric as above. However, they can combine this with a secondary job in battle as their journey progresses.

Changing your secondary job also changes the weapons and skills at your disposal. For example, the Dancer job can use daggers, but equip them with Warrior as their secondary job and then they can also use swords and polearms!

The more weapons you can use, the easier it will be to break an opponent. This will also drastically increase your power on the battlefield.

You can obtain licenses at various guilds throughout the world for basic jobs like Warrior and Dancer. Fulfill the guilds’ requests and you can obtain up to three licenses, allowing multiple travelers to use the same secondary job.

Some guilds operate openly in towns, while others are hidden away. Search every corner of the world to find them all.

Special jobs require a unique item known as “proof” to be used in battle. Only a single traveler can use one of these powerful jobs at a time, so choose wisely.

In OCTOPATH TRAVELER II, you can experience Crossed Paths - stories involving two travelers. Throné and Temenos return to Flamechurch, and Throné recalls a rumor she heard of a treasure inside the cathedral and asks Temenos if he would like to do a little investigating…