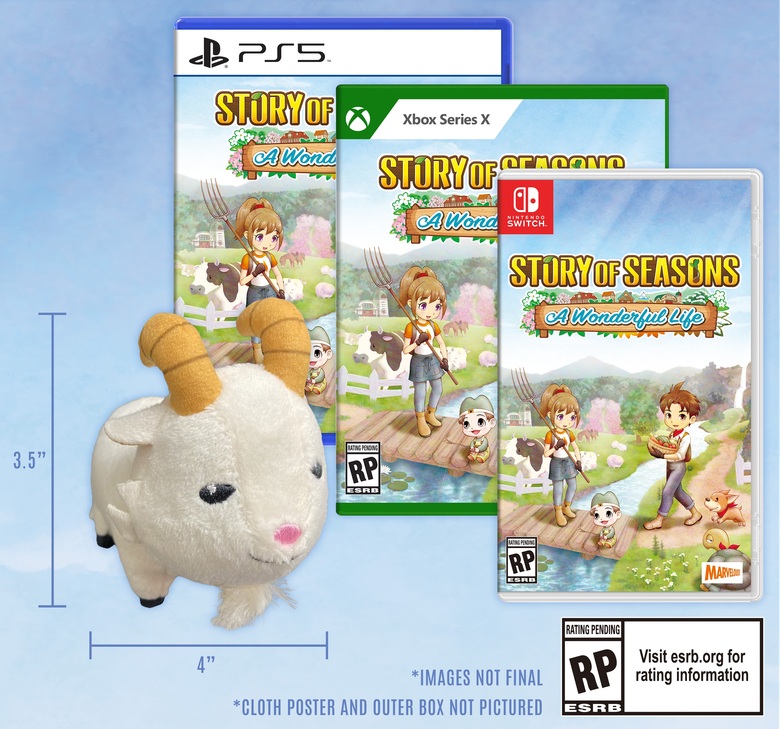 XSEED Games, the independent-minded publishing brand of Marvelous USA, Inc., today revealed the upcoming retail versions for STORY OF SEASONS: A Wonderful Life, including a premium edition. XSEED Games confirmed the title will be available for physical pre-order shortly on the XSEED Games Store and participating retailers with a standalone retail version available for a MSRP of $49.99, and a premium bundle on consoles for a MSRP of $59.99. STORY OF SEASONS: A Wonderful Life is a full reimagining of the fan favorite in the RPG/Life Sim series and will launch on Switch simultaneously in North America in summer 2023.

The premium edition will include a retail copy of the game packaged with an adorable 3.5” tall by 4” long pocket goat plushie and a large cloth poster in a custom box, both of which will share an original illustration by series illustrator Igusa Matsuyama. Information on the digital versions of the title will be announced at a later date. Fans can keep their eyes on the official STORY OF SEASONS: A Wonderful Life website for the latest updates and where to pre-order retail editions.

STORY OF SEASONS: A Wonderful Life revisits the tranquil community of Forgotten Valley where the protagonist fulfills their father’s dream of running a farm. As the seasons go by, players will find their lifelong partner, raise a child together, and watch them grow up. Will their child carry on the family’s farm legacy or find their calling somewhere else? Only time will tell…

An unforgettable tale of friendship, family, and farming blooms back to life for a new generation. Originally released for the Nintendo GameCube (and later the PlayStation 2), the STORY OF SEASONS: A Wonderful Life remake introduces a plethora of new events, enhanced festivals, a cornucopia of never-before-seen crops, and even more recipes to cook. Returning fans will find plenty of exciting updates to Forgotten Valley, while newcomers to the series will discover the joys of cozy farm life and the extraordinary characters that make this series shine.