Overwatch World Cup to Return in 2023 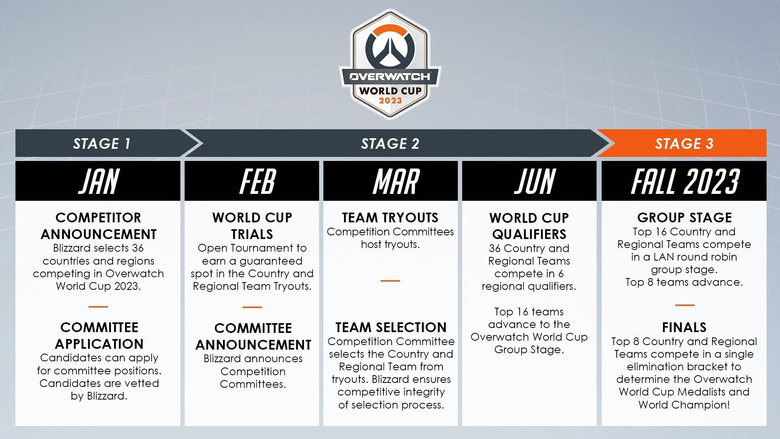 After three years away, Blizzard is thrilled to announce that the Overwatch World Cup is returning for 2023, and the competition will be bigger than ever: new game, new players, and new ways of spotlighting your country and region on a global scale.

Alongside regular tryouts, Blizzard is introducing a new avenue for players to compete for a spot on their team. This comes in the form of an open tournament format: World Cup Trials. In February, the World Cup Trials competition will earn winning players a direct spot in the tryouts for their team. Players will still be able to sign up for regular tryouts taking place in March. Regular tryouts will have a Competitive Rank requirement of Diamond and above, so aspiring players should start climbing the ladder now!

Also, in 2023 Blizzard will be offering some challenges and rewards for all players to help celebrate the return of the Overwatch World Cup.

In June, after team rosters are finalized, Overwatch World Cup qualifiers are planned to take place through regional online competition, narrowing down 36 teams to 16 for the next phase of the tournament. Those 16 teams will then battle it out in a LAN environment in the fall of 2023 to determine our first World Cup champion since 2019.

Whether you’re a pro, aspiring pro, or casual player, there are tons of ways to get involved. Stay tuned for further announcements, including details about each stage of the 2023 Overwatch World Cup, viewer information, and much more!