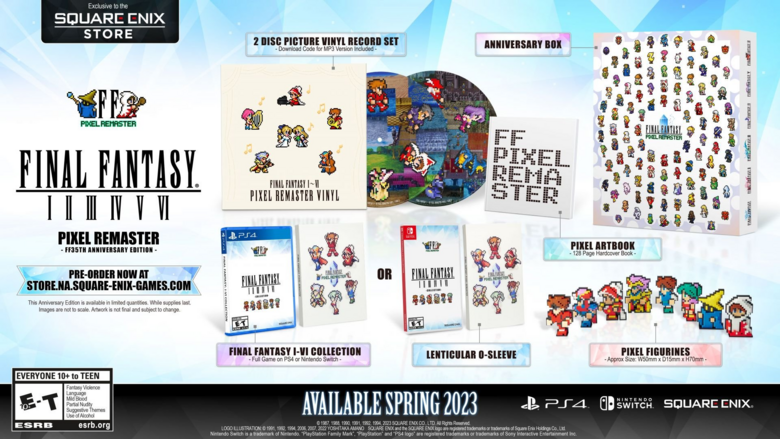 Following the ESRB ratings leak, Square Enix has officially confirmed the Final Fantasy I-VI Pixel Remaster Collection for Switch. The titles are set to arrive sometime in Spring 2023, and there will be physical versions up for grabs exclusively from the Square Enix online store.

Classic “FINAL FANTASY” titles have been reborn through vivid 2D pixel graphics and the beautifully rearranged soundtrack. Gameplay is improved with modernized UI, and extras such as a bestiary, illustration gallery and music player allow further immersion into the world of the game.

These games are newly developed remaster editions based on the original titles. Some of the changes and additional elements found in other remakes of these games are not included

Fans can go with the Standard Edition physical release for $75, or the FINAL FANTASY I-VI PIXEL REMASTER -FF35th Anniversary Edition for $260. That version includes the following:

Of course, there will also be digital releases for this collection, and fans will be able to purchase these individually or as a package. Just like the physical releases, these are due out sometime in Spring 2023.