Talking with the composer of Wavetale's can't-miss soundtrack

Easily one of the year's best 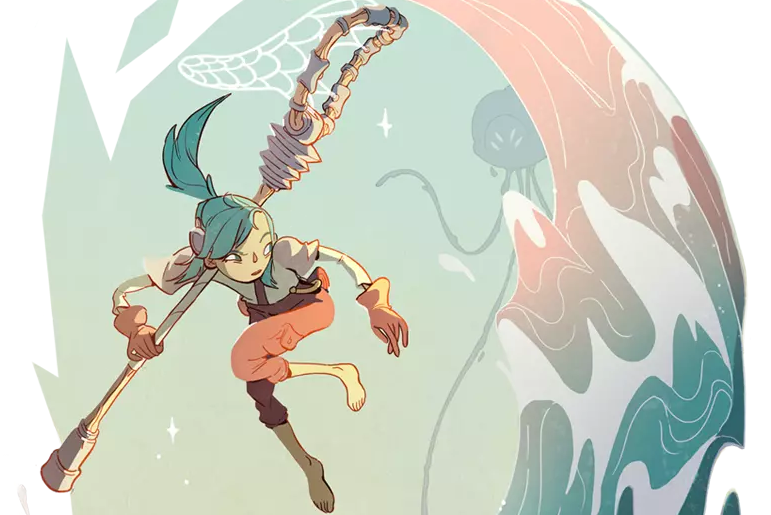 If you’ve been following the GoNintendo Patreon or listening to the GoNintendo Podcast for the last year, you’ve heard me crowing on about Wavetale since before it launched. From the debut Google Stadia trailer right up to the game’s launch on Switch, I’d talk about Wavetale any chance I could get. I’ll happily share all the reasons why in my upcoming review, but today I’m focusing on one element in particular; the music.

Wavetale as an IP didn’t exist before this debut game, making it impossible to have any nostalgia for it. Still, seeing the reveal trailer for Wavetale stirred up all sorts of feelings that are usually reserved for franchises I hold near and dear. I adored the gameplay and visual style, but it was the music that really moved me. Something about the style of music and the sweeping nature of it all made all sorts of emotion swell up within, and that feeling has remained to this day. In my humble opinion, Wavetale’s soundtrack is easily one of the best of 2022, if not one of the best in gaming.

The driving force behind that soundtrack is composer Joel Bille, who was gracious enough to chat with me about his work on Wavetale. We talked about the ins and outs of creating the music and style of Wavetale’s soundtrack, and I’m absolutely honored to bring you our discussion in full.

GN: How would you describe your approach to Wavetale’s soundtrack in terms of theme and vibe?

JB: Basically the soundtrack is about how Sigrid relates to her environment and the situations she’s in. We wanted the music to be melancholic at all times, and also convey a feeling of flow to match the game’s movement. I wanted a very dynamic soundtrack, to match how the ocean can be both a calming, soothing place, as well as a dangerous and uncontrollable force of nature. We wanted the soundtrack to cover that whole scale, and to convey that duality and uncertainty. The beauty, that is also the beast?

I rarely work within concrete genres or direct references, I usually end up with a huge playlist of references, this time around 8 hours long. It’s a wide variety of genres, but one that stands out is a lot of Norwegian trumpet based sort of noir-mountain-jazz. It’s a thing!

GN: How long did it take to put together the game’s soundtrack?

JB: Almost exactly a year, for the music you hear in the game. About half the time was spent on composing and producing the music, and the other half on implementing it in the game. Putting together the soundtrack album took a bunch of weeks more!

GN: It seems there’s a very unique component to Wavetale’s soundtrack that chooses certain song segments/sounds on the fly to compliment the game’s action. Can you detail how this system works and what it was like composing within it?

JB: Basically, each area of the game has its own theme. Every theme is divided into both instrument groups and intensity layers, forming a grid of sorts. As you play, we make changes both in what instruments play and not, as well as their intensity, depending on a few things. A lot is tied to how you move about in the world, if you’re out on the ocean surfing or chilling out on an isle somewhere, the music adapts to match the pace. The music also changes if there’s enemies nearby, or if you engage in combat with them. All of this is changes within that same theme, neatly tempo-synced. There’s also a lot of changes happening as you progress in the story, like if you enter a new part of a quest or stumble upon a huge serpent. There’s hundreds of music triggers in the game!

Composing within this system was quite a challenge. It was a sort of three dimensional arrangement, with these intensity variations on top of the normal arrangement over time. So there was a lot of variables going on, meaning even more loose ends than normal. But it was also a lot of fun, and the frames of the system was also a great growing ground for creativity. 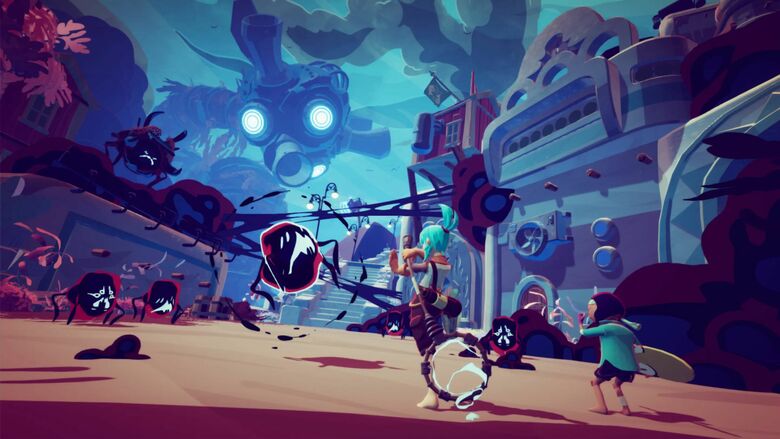 GN: What was the toughest part of putting together Wavetale’s soundtrack?

JB: Boss themes and combat. I always find them very difficult. I want them to feel as connected and grounded as everything else, but there’s also a lot of conventions and expectations that you sort of have relate to in some way. I suppose I’m at my best with the more lo-key melodic stuff.

GN: How much direction were you given in creating Wavetale’s soundtrack?

JB: I was not given a lot of direction when it comes to style of music or concrete things like that, more about what feeling the team was looking for, both in the game as a whole and in different parts of the game. Especially in early development there was a lot of talking and visioning.

GN: Considering the game’s focus on water elements, were there certain instruments you knew you wanted to use, and others you thought best to avoid?

JB: Usually when I compose, I don’t work too closely with rational ideas of what would fit concrete themes. I rather work more intuitively, and usually a lot of connections and relations can be found in hindsight. That said, I have put a lot of effort into trying to have the music illustrating the Ocean, in many ways. I decided early that I wanted to have the Flugelhorn as a sort of lead instrument. (It’s a sort of trumpet, but sounds softer and more airy) It’s something with it that works well with the open vastness of the sea, and it can be played very organically, like it is the wind itself that plays. There’s also a lot of Flute (more wind!) and Marimba, which with its wooden texture also feels very naturalistic and dynamic.

There is also a few synths in there, mainly in the music that plays during combat. I suppose I wanted the enemies of the game to feel like a contrast to the untamed nature of the sea, so they’ve got lots of aggressive synths and drums in them. There is also a few synth pads in the soundtrack, that sort of sounds like waves crashing, indicating that the state of the ocean is also affected by human behavior.

I avoided using too much drums, somehow it almost felt blunt. I think I wanted a more complex motor of drive and push for some reason. There’s instead a lot of riffs and ostinatos (a sort of repeating pattern) on flutes, clarinet and violin. There is also drums in a few places where I really wanted to go full on, but I’ve been pretty restrictive in where I’ve used them! 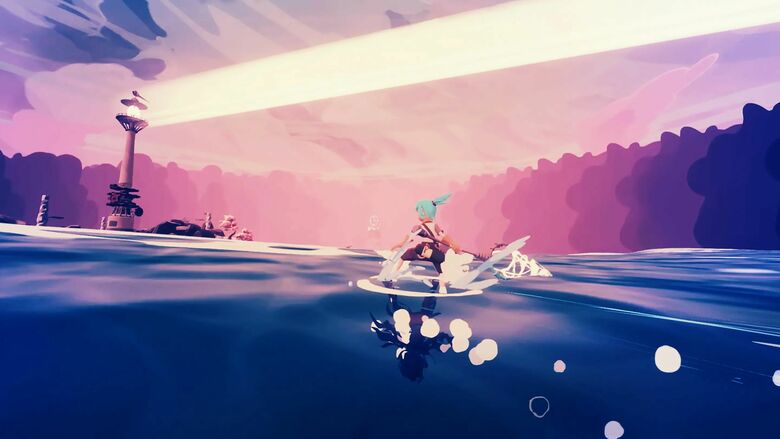 GN: How challenging is it to take your work on Wavetale and adapt it to a standalone soundtrack release?

JB: This was a big one. As I mentioned earlier, the game music consists of hundreds of audio files, looping and shifting depending on what the player does. So creating a soundtrack album with songs that have a beginning, end and something interesting in between was quite a challenge. A lot of darlings where killed, it’d be a lousy soundtrack to have five or more versions of every song. In a few cases I’ve added two versions, but most often the songs on the album are a sort of collage of all the variations that might play as you go through the game. So creating the soundtrack was in itself a pretty creative job!

GN: From Wavetale’s debut trailer to the game’s release, the marriage of the game’s music and action made me tear up multiple times. Did you experience similar levels of emotion while creating the soundtrack or seeing it implemented in the game?

JB: I had a moment like that when I was working on the ending cutscene. I tried a few different takes on how to approach it. I suddenly tried to add the lullaby I’d written for Sigrid, with vocals and trombones for background. Something happened, and I might have teared up a bit myself…

GN: What are you most proud of with Wavetale’s soundtrack?

JB: When I wrote Journey to Candle Hill back in 2020, I wanted to convey a sense of freedom. To be a part of nature, in this case the ocean, surf its waves and be an intertwined part of it. Two years later, when the song was released in december 2022, my mother in law heard the song, without having seen the game, and described her experience with pretty much those words. I think it’s pure actual real magic that you can put these emotions or ideas in a song, and years later they are picked up, just as I left them. It makes me proud and grateful that I’ve practiced and developed the ability to do that!

GN: How does it feel to finally see your work on Wavetale reach a much wider audience through the game’s multiplatform release?

JB: Great! I’m very glad it’s much more accessible now, which is great. It’s also a bit nervous, because a lot more eye’s will be on it and every little detail will be scrutinized. I hope people like it! 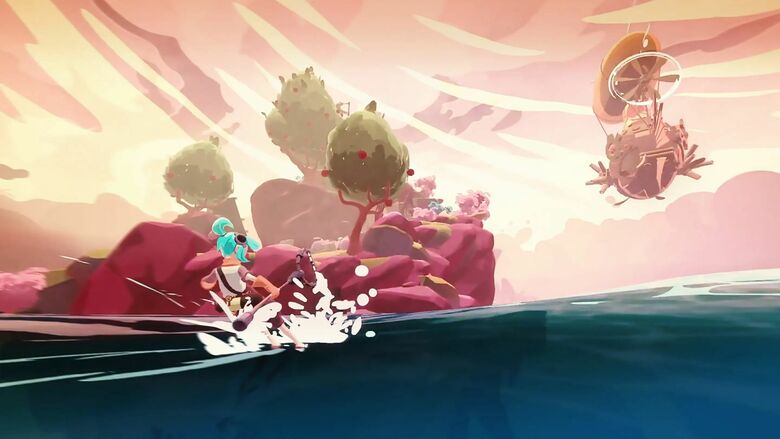 Once again, a major thanks to Joel Bille for making time to chat with us about his work. You can listen to the Wavetale soundtrack on your streaming service of choice, and you can follow along with everything Joel Bille is up to via Twitter.

As for Wavetale itself, you can pick the game up on the Switch eShop right now for $30.