A look ahead to next year 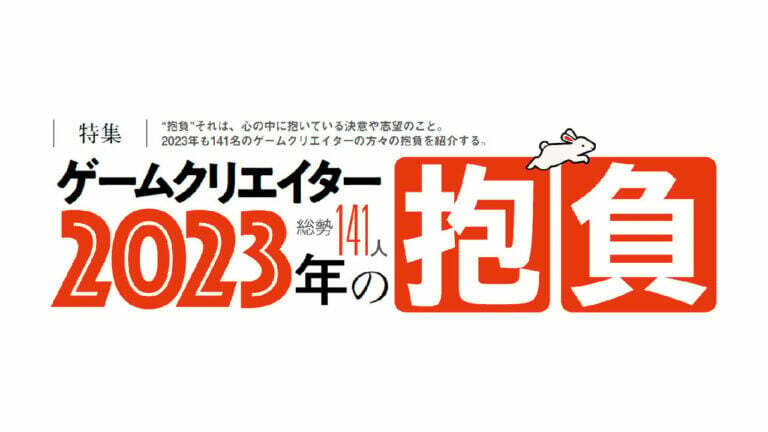 As far as the game industry goes, 2022 is done and dusted. A handful of games are coming out on platform’s before the year’s end, but by and large, we’ve seen everything the year has to offer. Now it’s time to look forward to what 2023 has in store for gamers around the world!

This week’s issue of Famitsu magazine has put together quite a look ahead at 2023, as it includes comments from multiple big-name Japanese developers on their plans for the new year. We don’t get any big reveals or surprises, but we do get to hear multiple things to get excited about!

You can read a bunch of the developer comments below, some of which pertain to Switch and others are too nebulous to know for now. We’ll just have to keep our fingers and toes crossed that all games/dev talk mentioned is related to Switch releases!

“We are currently still working on content for Bloodstained: Ritual of the Night, but we are striving every day to be able to make a big announcement in 2023.”

“I’d like to finish work on the remaining content for Bloodstained: Ritual of the Night. And that will lead us to the next step.”

“I would like to make 2023 a year of further ‘evolution’ for the Neptunia series. There should be some new developments this year, so please look forward to them.”

“In 2022, with the release of a long-in-development game and broadcast of a TV anime, we were able to celebrate the 20th anniversary of Utawarerumono together thanks to the fans who have always supported us. In 2023, I plan to take a short rest and gather new energy for our next title. As is expected of our company, we hope to continue taking on new challenges going forward, so please look forward to it!”

“We should be able to announce two new game projects by the end of the year. We also plan to release the Switch version of DYSCHRONIA: Chronos Alternate produced with MyDearest this year.”

“Grasshopper Manufacture will celebrate its 25th anniversary. We will continue to dash forward.”

“We are diligently developing new title(s).”

Kazuma Kujo “While I wasn’t able to announce the next development for Manga Ka Keru in 2022, I hope to announce something new for that title in 2023. A new Disaster Report title will definitely also be announced in 2023. I intend to do everything that I can.”

“The Kou Shibusawa brand plans to release several new titles in 2023. We will also update our mobile games, so please look forward to it!”

“As the Nobunaga’s Ambition series will reach its turning point 40th anniversary, I would like to make various preparations as to make it an even more exciting celebration with the fans!”

“The 40th anniversary of Nobunaga’s Ambition, and giving back to the game fans.”

“Our company plans to release many major titles in 2023 and 2024, so we are working hard to make sure they’re a success.”

“While we were unable to share any information about future developments of the Dynasty Warriors series in 2023, we hope to be able to do so in 2023.”

“This past year was the biggest year in Sonic history, including the release of the movie sequel, new titles Sonic Origins and Sonic Frontiers, and the Netflix animation Sonic Prime. We are preparing a second wave to keep the fans happy and maintain that momentum going into 2023. We already announced additional content for Sonic Frontiers, but there is a lot more outside of that, so please look forward to it.”

“LEVEL-5 will celebrate its 25th anniversary. In 2022, I feel like I personally put my heart and soul into Megaton Musashi, but in 2023, we will announce many new titles, so I hope to make an even bigger impact as a company. I’m going to do my best with the mentality of ‘Making our presence known going forward.’”

“Thank you so much for your ongoing support of the SaGa series. Please look forward to future developments. Various things are being prepared.”

“In 2022, we released our latest work AI: The Somnium Files – nirvanA Initiative!… Currently, we’re working on a new game. I have a strong feeling that it will be a crazy game that offers a new experience. The announcement is still sometime ahead, so please look forward to it! Power!”

“In 2023, we’ll release Ys series titles Ys Memoire: The Oath in Felghana and Ys X: Nordics in succession, and are also planning several remakes. We plan to release a lot more titles than we usually do in a year, so please look forward to it.”

“We are preparing various titles that will please Digimon fans. I hope you will look forward to them.”

“White Owls currently has several projects underway. In addition to the additional content for The Good Life, which has already been announced, there is some completely new stuff in the works. Because of that, development was so busy in 2022, that I was hardly able to go out to play. All of th edevelopment staff is working hard to be able to deliver some of these to you next year! Please continue to give us your support.”