Bubble Bobble is the next title coming to Arcade Archives 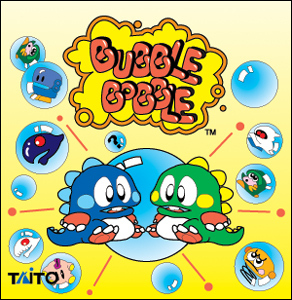 Hamster has announced that the next title coming to the Arcade Archives series is Bubble Bobble, a platform action arcade game originally released by Taito back in 1986. The game will be released on Nintendo Switch on December 29th, 2022, priced at $7.99.

About the game (via Wikipedia):

In the game’s plot, “Baron Von Blubba” has kidnapped the brothers Bubby and Bobby’s girlfriends and turned the brothers into Bubble Dragons, Bub and Bob. Bub and Bob have to finish 100 levels in the Cave of Monsters in order to rescue them.

In the game, each player controls one of the two dragons. Players can move along platforms, fall to lower ones, and jump to higher ones and over gaps. Each level is limited to a single screen, with no left/right scrolling; however, if a screen has gaps in its bottom edge, players can fall through these and reappear at the top. Each level has a certain number of enemies that must be defeated in order to advance. The players must blow bubbles to trap the enemies, then burst these bubbles by colliding with them. Each enemy defeated in this manner turns into a food item that can be picked up for extra points. Defeating multiple enemies at once awards higher scores and causes more valuable food items to appear. All bubbles will float for a certain length of time before bursting on their own; players can jump on these and ride them to otherwise inaccessible areas. Magic items appear from time to time and grant special abilities and advantages when picked up. Special bubbles occasionally appear that can be burst to attack enemies with fire, water, or lightning. Furthermore, if a player collects letter bubbles to spell the word EXTEND, a bonus life is earned and both players immediately advance to the next level.

A player loses one life upon touching any free enemies or their projectiles (rocks, fireballs, lasers, bottles). Enemies turn “angry”—turning pink in color and moving faster—if they escape from a bubble after being left too long or the players spend a certain amount of time on the current level. They return to normal if either player loses a life. After a further time limit expires, an additional invincible enemy appears for each player, actively chasing them using only vertical and horizontal movements. These disappear once the level is cleared, or when a player loses a life. When there is only one enemy left, it immediately becomes angry and remains in this state until defeated.

You can take a look at a gameplay video for the arcade version of the game below.