A deluge of games to look forward to

Today, publisher eastasiasoft premiered an “Early 2023 Showcase” that covered 15 indie titles scheduled for release in January, February and the first half of 2023, and 10 of those titles are Switch-bound. This more than 10-minute presentation continues the previous showcase format and once again consolidates news on multiple projects for convenient reference in the months ahead. You can see the complete list of Switch titles discussed below, along with details on each. 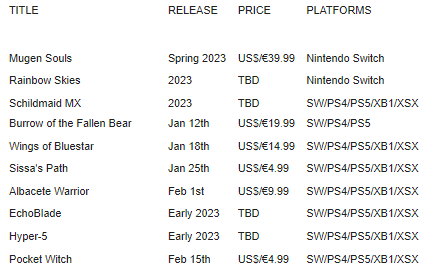 Join Chou-Chou on her mission to conquer the universe and its seven worlds! In this anime-style JRPG, you’ll take command of trusty companion Altis, loyal peon Ryuto and more, as Chou-Chou turns the heroes and demon lords of each world into her personal servants and thus frees the universe of conflict under her ultimate control. But will it all go as planned?

Mugen Souls features turn-based combat on a free-roaming battle map, party and skill customization, expansive worlds to explore, and plenty of that “moe” aesthetic fans adore! Destroy crystals on the battlefield to activate Hyper Mode, execute combos and use Moe Kill techniques to enslave enemies, transforming them into items by exploiting their weaknesses. Create a unique cast of minions by customizing body parts, facial expressions, job classes, and more!

This updated version of Mugen Souls includes all prior extras while faithfully adapting the content of the Japanese original, making it the definitive way to experience this cult classic JRPG!

Rainbow Skies is a strategy RPG presented in vibrant isometric style! Immerse yourself in a colorful world filled to the brim with murky dungeons and traditional turn-based battles. Tamable monsters and a variety of weapons, equipment and skills offer you a wide range of customization and character development possibilities. Tons of side quests, lively towns and exciting secrets to discover will keep you coming back for more!

It’s a big day for Damion. Today is his final examination as a monster tamer, an important profession in his hometown, which is constantly threatened by monster attacks. However, after a terrible hangover, Damion completely messes things up and not only fails the examination but also destroys the monster compound. When he tries to cover up his mishap with his examiner Layne, things turn from bad to worse and through a number of unforeseen circumstances, they find themselves between the fronts of two rival superpowers.

Outnumbered and outgunned in deep space? No problem! Turn your enemies’ attacks into pure bullet heaven with your advanced Schildmaid technology and start collecting dangerous projectiles to power up your ship and score big! But when your shield runs out and danger time kicks in, you’d better switch up your strategy fast!

Schildmaid MX is a fresh and frenetic side-scrolling 2D shoot ‘em up in which you pick 1 of 3 ferocious fighter spacecraft to wreak havoc on the invasion fleet that threatens your planet. Embark on multiple attack runs and strike fear into the hearts of your enemy. The best pilots are immortalized on the online leaderboards!

The Burrow of the Fallen Bear’s seal is getting weaker and adventurers from the Furland Kingdom are coming to explore the house of one of the most fearful and violent assailants in the land. Guide a feline rogue named Krile on his journey to prove his worth and be chosen to save the Furry Heroes!

Burrow of the Fallen Bear is a furry-themed visual novel with multiple romance options layered within an exciting medieval adventure. Along the way, you’ll meet 3 potential companions with unique backstories and motivations. Each character comes to life with animated sprites.

Blast off for a story-driven shoot’em up experience unlike any other! As mankind faces the remnants of a mysterious artificial intelligence, it’s up to trainee pilot Aya and veteran ace Zarak to investigate the resurgent threat against free space. Along the way, these defenders of peace will need to confront their past and learn more about themselves before they can uncover the truth of their enemies.

Combining elements of traditional side-scrolling arcade shoot’em ups with HD presentation, Wings of Bluestar is both familiar and modernized, accessible yet challenging. In addition to multiple ships, weapon upgrades and intense bullet hell gameplay, a deep narrative experience awaits with dialogue choices and multiple endings for both playable characters. To extend the experience even further, Wings of Bluestar features boss rush mode, training and a shop to unlock in-game rewards.

Get to know the curious hobby of a kitten named Sissa! She’s a very organized feline, and when she plays with her balls of wool, each needs to be pushed across the floor to the correct spot. Presented in cute and colorful 3D style, Sissa’s Path is a pushing puzzle game where you play as Sissa and move her toys around tiled floors.

Once all the balls of wool rest on the white circular tiles, the stage is cleared, and another increasingly complex hand-crafted puzzle awaits to challenge Sissa’s toy-nudging skills. Can you help her organize her toys?

Take the role of Spanish ninja Benito, his chicken pal Pepito and his sensei Paco as they embark on a bizarre adventure across the globe! Presented in a mix of 3D environments and 2D pixel art sprites, Albacete Warrior takes traditional side-scrolling beat ‘em up combat into a new dimension, allowing players to “cockslap” hordes of enemies with Benito’s feathered buddy Pepito while running and wall jumping through a huge variety of 3D stages.

With the speed and agility of a fearsome warrior and armed with satirical street-smart humor, Benito might just have what it takes to become the chosen one. Charge into battle solo or team up with a friend for brutal cooperative play!

Blinded and trapped inside a labyrinthian dungeon tower, every sound you make illuminates your path to freedom! In EchoBlade, danger lurks around every darkened corner, from trap doors and chambers filled with toxic fumes to halls patrolled by crusader knights and more! Explore in first-person perspective and watch for echo patterns that reveal walls, floors and enemies around you.

Every footstep, every metal clank of armor or swing of a blade illuminates your path with a wave of sonic resonance. Stride with care to avoid pressure plates that spring traps. Each level features new mechanics, secrets to discover and puzzles to solve. Customize your adventuring experience by assigning colors to different kinds of threats and environmental features. Use your wits and every resource at your disposal to defy fate and escape!

Deep space scount ship Hyper-5 has received a distress signal and heads into battle against an unknown threat. As a pilot on your own and facing nearly impossible odds, you’ll need to survive more than forty enemy types and massive boss encounters across the varied land, air and underwater stages of planet 4GDT.

A little witch has been locked away in a dungeon filled with traps and deadly roving enemies, and it’s up to you to help her escape! Pocket Witch is a precision platformer presented in retro pixel art style, where the little titular witch must overcome a series of brainteasing single-screen challenges to thwart the evil sorcerer who imprisoned her.

Together with her flappy bat friend, the little witch will have to jump and air dash over wooden thorns and pools of acid, dodge flying blades, avoid magic spells and find keys to open gates. This witch may be little, but with your help, she can take on the biggest obstacles and escape to freedom!

Save an island in peril on a childhood holiday.

With restless spirits threatening the safety of Toromi Island’s inhabitants, Tai must venture through dangerous dungeons and across a variety of environments to put the spirits to rest. All in a summer holiday!

Reverie is an action adventure game set on a fictional island in New Zealand, inspired by the legend of Maui and the Giant Fish where the demigod himself fishes up the North Island with a powerful fishhook. 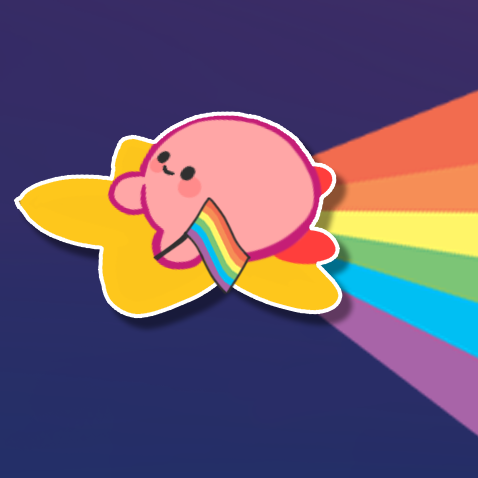