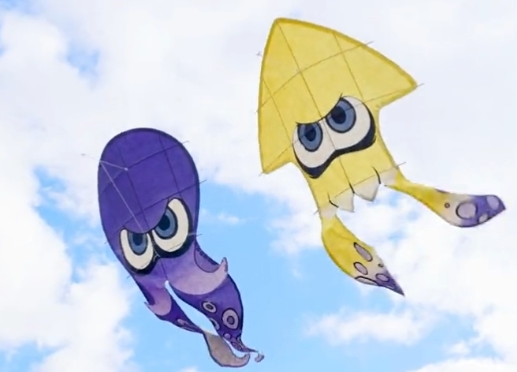 When you think of Splatoon 3, you no doubt think of swimming around in a lot of ink. For whatever reason, Nintendo has taken things in the opposite direction with their latest merch. Rather than making an ink or water-related toy, Nintendo has set their eye on the skies.

Nintendo has revealed official Splatoon 3 squid kites, and they come in Inkling and Octoling designs. As you might have guessed, these appear to be a Japan-only release at this time, but hopefully Nintendo will see fit to release them worldwide at some point this year.

These kites are actually related to a New Year’s custom in Japan, as back in the Edo period, people were only allowed to fly kites during New Year’s celebrations. Kites were banned by the government as they could cause damage to buildings or fields if they fell, and apparently people were getting into serious fights over kites! Along with that, the Japanese word “tako” is a homonym for both “kite” and “octopus.” In the past, the word for kite was “ika-nobori,” with “ika” being a homonym for “kite” and “squid.”

There’s no word on pricing for these Splatoon 3 kites at this time, but that information should become available in the near future.