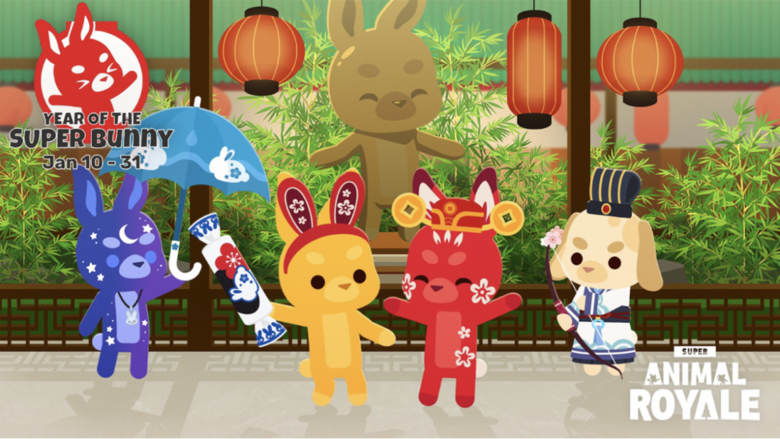 Modus Games and Pixile Studios announced today that free-to-play battle royale Super Animal Royale is dropping an all new event to celebrate Lunar New Year: the Year of the Super Bunny begins today and runs through January 31st! This year’s event is all about the island’s lovable lagomorphs, and they’re bringing in 2023 in style.

Ring in the New Year with new and returning Lunar New Year cosmetics:

Super Animal Royale is a free-to-play top-down multiplayer battle royale for up to 64 players. Players select their favorite Super Animal from a menu of foxes, pandas, kitty cats and other bloodthirsty beasts before the match begins. Then, players parachute into the ruins of an ill-fated safari park and battle to the death, in a lethal barrage of bullets, explosives and hamster balls. ﻿ Cut tall grass and loot abandoned structures in search of the guns, Super Powerups and health juice you’ll need to survive, and watch out for the poisonous Skunk Gas, slowly seeping in from the edges of the map. Super Animal Royale features carefully balanced run-and-gun gameplay combined with an intuitive fog of war system that restricts a player’s view to line of sight, allowing for sneaky, strategic play. Whether predator or prey, only one animal can reach the top of the food chain, and with guns in their paws, it’s anyone’s guess which one it’ll be.