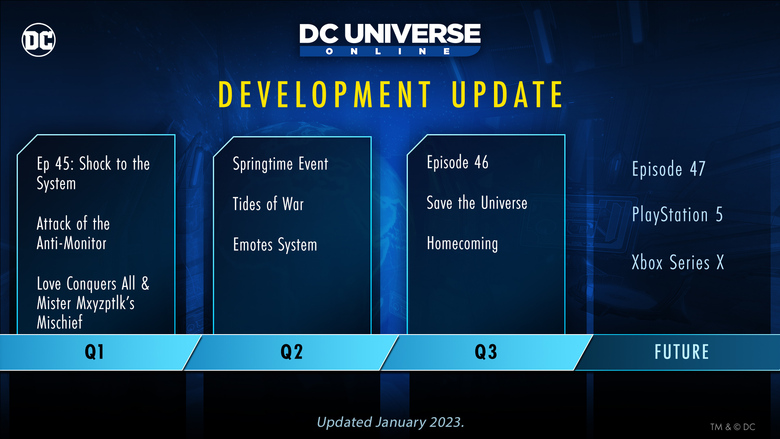 The DC Universe Online team has shared a look at what’s to come with the game from here on out, including content in the near future and things that’ll release sometime down the line. Here’s what you can expect as we move deeper into 2023.

NEXT ON DCUO: JANUARY-MARCH

Episode 45: Shock to the System

Dakota City’s just built different. The Big Bang attack that created new heroes, villains, and victims has drawn sinister, otherworldly attention. Ebon’s powers cast a long shadow, but it’s the Apokoliptian Parademons that has Static shocked enough to contact you. Why are people disappearing, why has Apokolips turned its attention to Dakota City, and will you be able to take on such a shadowy threat?

In SHOCK TO THE SYSTEM, players will travel to the heart of the Milestone universe in Dakota City to offer help and to investigate why these heroes and villains are disappearing.

THINGS TO KNOW ABOUT SHOCK TO THE SYSTEM:

SHOCK TO THE SYSTEM will offer normal and elite versions of On Duty content, along with level-agnostic event versions available for a limited time.

The content will include open world missions and world bosses, with a duo, alert, and raid.

The episode will feature DC and Milestone characters including Static, Ebon, Rocket, DeSaad, and more.

The storyline will include adventures centered around the new Dakota City and written by acclaimed comic book writer Leon Chills.

The episode will launch new player rewards, including gear, styles, and more.

EPISODE 45: SHOCK TO THE SYSTEM will launch in spring 2023 on PC, PlayStation 4, Xbox One, and Nintendo Switch.

NEXT AT DIMENSIONAL INK: JANUARY-MARCH

The bulk of the next few months will be focused on Episode 45 and then the early stages of Episode 46.

The team will work on a new emotes system. With this feature, you be able to collect new emotes and animations to better express yourself throughout the game.

NEXT ON DCUO: APRIL - THE FUTURE

Looking to the rest of the year, expect Episode 46 in the summer and Episode 47 in the fall, along with new allies and artifacts. One of these episodes is likely to be pretty dark while the other is expected to be very not. Expect to return to Save the Universe and the rest of the seasonal events as well.