Nobody Saves the World receives a free content update today

Nobody saw this coming! 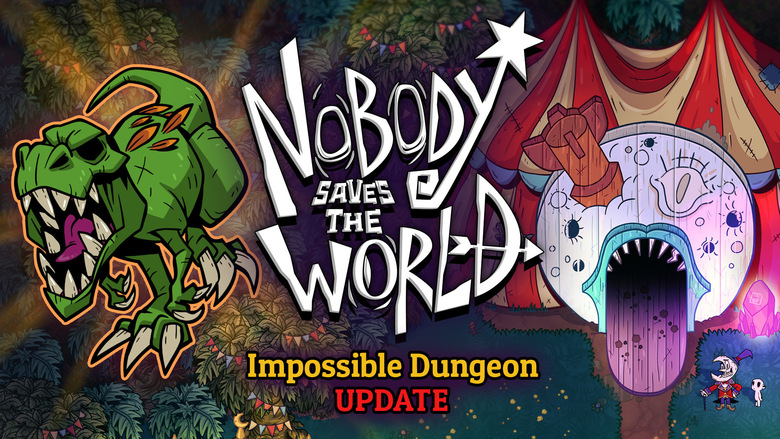 Surprise! Drinkbox Studios is celebrating the first anniversary of their critically acclaimed action RPG, Nobody Saves the World, with the release of the brand-new Impossible Dungeon update, out today for free! The update introduces a new carnival themed “endless” dungeon and a new Dinosaur form players can unlock by playing through the Impossible Dungeon. The update is now available on Switch.

To celebrate the anniversary, Nobody Saves the World has been discounted by 40% on Switch for a limited time, making for the game’s lowest price ever!

Step right up, and see if you’ve got what it takes to brave the challenges of Magic Jimmy’s Impossible Dungeon! Tucked away in a corner of the Alchemist’s Gorge area, players can test their skills on several floors of increasingly tough combat challenges while racing against the clock to try and get through each challenge as quickly as possible. This mode is perfect for Nobody Saves the World players who are looking for an endless combat challenge and a space to test new form combinations.

Conquer the Impossible Dungeon, and be rewarded with the magical Dino Plushy that unlocks the new Dinosaur form! As with all other forms, the Dino comes with its own unique abilities and quests, and can be used throughout the entire game. Doing well in the dungeon will also reward players with tickets that can be used to build a commemorative statue of all the game’s forms.