Braving the Switch eShop next month 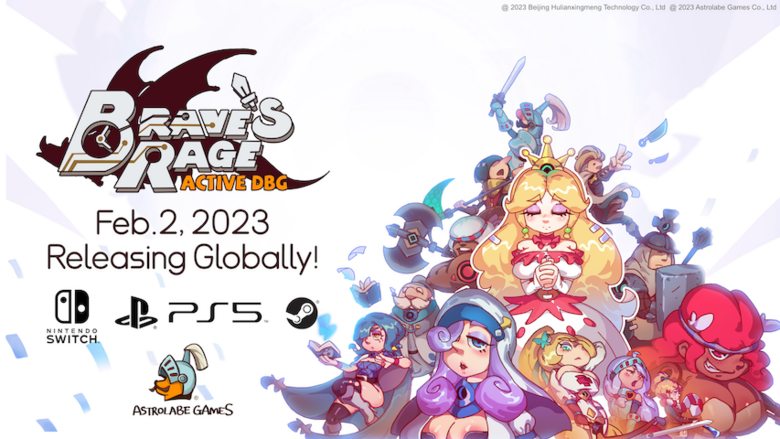 Today, Astrolabe Games is pleased to announce that the “Active-Time” deckbuilding game, “Brave’s Rage”, created by ISVR, will head to the Switch on February 2nd, 2023. The full release of “Brave’s Rage” will feature massive new content, including a completely revamped story mode, a brand new Brave and new looks for existing Braves, and more!

A Challenging “Active-Time” Deckbuilding Game! “Brave’s Rage” is a highly challenging active-time deckbuilding game that combines an action-time bar (ATB) system that is commonly seen in JRPGs with the traditional deck-building gameplay. It entered Early Access in June 2022 and received very positive reviews. After 8 months of fine-tuning and polishing, the full release heads to Switch next month.

This game has officially passed the meticulous quality checks performed by Nintendo, and in order to better adapt to the features of the consoles, adjustments have also been made to optimize the gameplay experience. A brand new achievement system has been added to ensure that achievements are fun and “painless” to obtain. Additionally, to accommodate controllers, the game can now also be played at a slower speed during combat - 0.25x and 0.5x, for players who are not accustomed to the action-time combat system at the beginning. The players could also choose to take advantage of powerful features like “Bullet-Time” and “Time-Freezing” anytime during combat so that players will always have enough time to think about their potential card plays. Additionally, to enhance the overall experience on both larger screens and portable devices, “Brave’s Rage” has also undergone a UI overhaul based on players’ feedback during the Early Access and made numerous improvements in design to make sure the game is enjoyable anywhere on any device.

In the Full Release of Brave’s Rage, the storyline has been thoroughly fine-tuned and re-arranged. Now it will progress from Challenge Tier 1 all the way to Challenge Tier 15, organically connected with tons of unlocks waiting to be discovered. The players will be able to play as different Braves and find their favourite playstyles as they progress through the Story Mode, and eventually reveal the mystery troubling the Owl Kingdom for the longest time, unlocking the most important feature at the final Challenge Tier 15.

There will be 5 additional preset difficulties settings (Challenge Tier 16 – 20). Of course, with greater risk, there will be greater rewards! The players can unlock all kinds of different character designs and cosmetics (“Alter-ego”) for their favourite Braves.

In addition to the 8 existing Braves, each with a unique skillset, playstyle and completely different deck, the Full Release of Brave’s Rage will also include a ninth Brave – The Princess. The Princess, who is the one originally to be saved, can use all cards from the decks of each Brave and also has some very powerful skills. As one may guess, the Braves have to complete Challenge Tier 15 and beat the fearful hidden boss to safely bring her back. And there’s more to that! On top of the existing Default Difficulty and Custom Difficulty mode, there will be a brand new “Timed Trial” mode for those hardcore Braves. Of course, being hardcore, the “Timed Trial” mode is soft-locked behind some very high Challenge Tiers, so work your way up for it!

In the full release, the dev team has done a total game balance overhaul based on the feedback from Early Access players around the world and smoothened the difficulty curve, aiming to ensure that everyone can pick up the game quickly while retaining the most fearful foes and difficult levels for those who welcome challenges.