PLAYISM hosting 7 Days to End with You contest 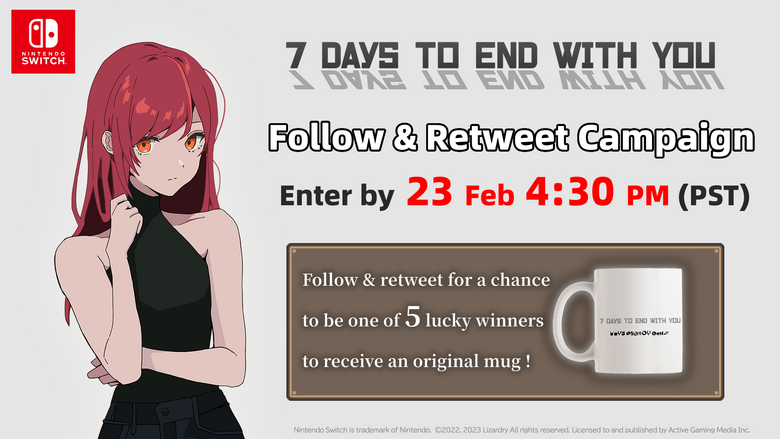 PLAYISM previously announced that 7 Days to End with You will be coming to the Switch on Jan. 26th, 2023 with new exclusive features. Ahead of that release, the publisher is offering a special giveaway that you can participate in via Twitter.

Simply follow @playismEN on Twitter and retweet the campaign tweet for a chance to be one of five lucky winners of an original 7 Days to End with You mug specially designed for this campaign!

In 7 Days to End with You, guess the meaning of each word of an unknown language in this unique puzzle and novel game by Japanese indie developer Lizardry. To know a language, know the world, and finally know you. You don’t know a single word in the language of this world. Deduce the meanings of words the person before you uses to communicate with you. Then try to understand them like a puzzle, one piece at a time. You are free to perceive the meaning of the words you read. The relationship between the two characters is built on the words you interpret. And their story is also built on the words you interpret.

Their world changes according to your understanding. Maybe their story is a short, ordinary story, or maybe it’s a long, peculiar story. Or both stories could exist at the same time. There’s nothing wrong with that. The story is only complete with your interpretation. So certainly, every story your interpretation results in is correct.

Even if you don’t understand the story at first, you have the opportunity to repeat it over and over again. This is a short and long story, of only seven days.