REVIEW: Boreal Tenebrae is a big swing, but an equally big miss

Think the title's confusing? Wait till you meet the Moose 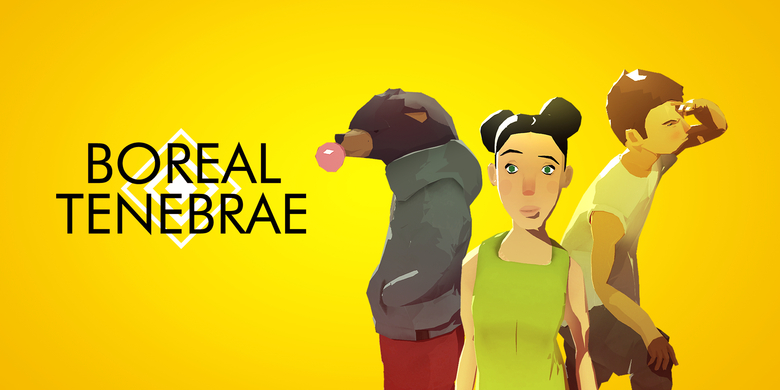 It’s always exciting when a game dares to be different or attempts to push boundaries. From the opening minutes of Boreal Tenebrae, I knew I was in for a unique narrative journey. Sadly, that excitement turned to frustration, caused by the litany of bugs and control issues I experienced. My time with the game ultimately ended in resigned disappointment when one bug in particular ended all hopes of any further progression.

A point-and-click style adventure game, Boreal Tenebrae is set in a diseased town called Dusky Rivers, which is filled to the brim with dark secrets and macabre imagery. The narrative divides its overarching mystery of what the heck is happening in this town across multiple characters, all having their own enigmatic experience interwoven with each other. You’ll rarely spend more than 20 minutes with a character before being taken away to another, which can be disorientating at first, but the more you uncover about each character’s circumstances, the more it makes sense and the initial disorientation proves to be a storytelling device, rather than bad implementation. 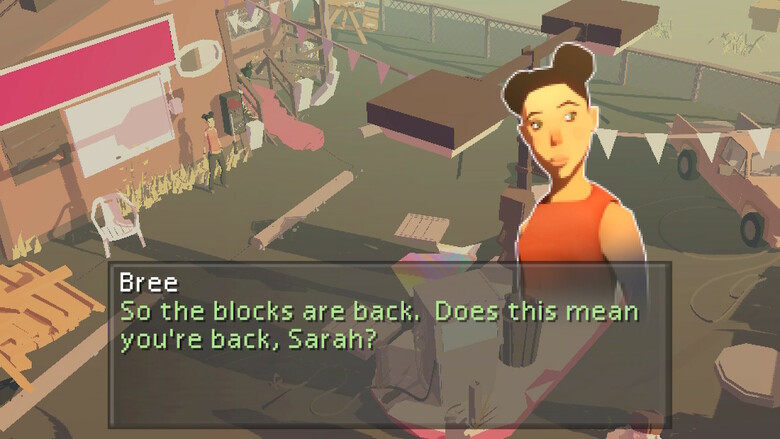 Dusky Rivers itself is a weird town in the middle of nowhere which recently had large monoliths unexpectedly appear. Equally strange, the town’s citizens are being absorbed into these monoliths. A girl named Sarah seems to have fallen victim to these circumstances, and in the first moments of the game, you control Sarah’s sister Bree to figure out what’s happened. It’s a great start with two strong mysteries established quickly, and you’re given an engaging, traditional-style tutorial puzzle to tackle as well. You’ll learn the layout of the controls here, which may give you the first indication that the controls can cause issues. This first puzzle requires items to be combined through your inventory, which quickly becomes cumbersome, as the inventory menus don’t include a dedicated “back” or “select” button. This makes navigating needlessly counter-intuitive and mistake-prone, but the starting puzzle itself is satisfying and well designed. 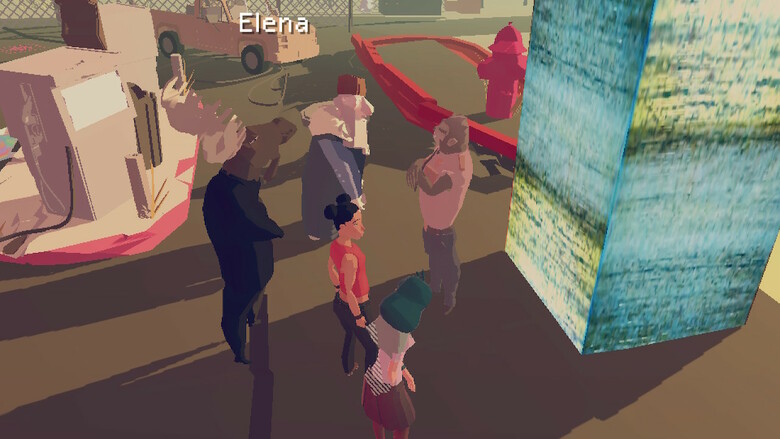 One of the Monoliths, and a selection of the colourful cast you'll meet

Much like the plot, the characters you control and speak to during your adventure are weird as well. There’s the human-sized frog Foreman, a ghost who chats with cats and foxes, a fairly sage Moose-man, and plenty of other unique individuals. While this cast might seem rather whimsical, character motivations and stories are very much grounded. They experience the world around them as incredibly depressing, due to overbearing, corrupt officials and the endless repetition of working at the one place in town that pays any wages; The Mill.

Again, much like other aspects of Boreal Tenebrae, The Mill is…weird. There’s a massive hole in the middle of the work floor which everyone seems to ignore, and a radio on its top-level balcony that can transport you to another life and location within Dusky Rivers upon hearing it. This is the fantastical backdrop to a morose tale of potential Unionization in a workplace that desperately needs it, but will almost certainly cease operation should it come to pass. 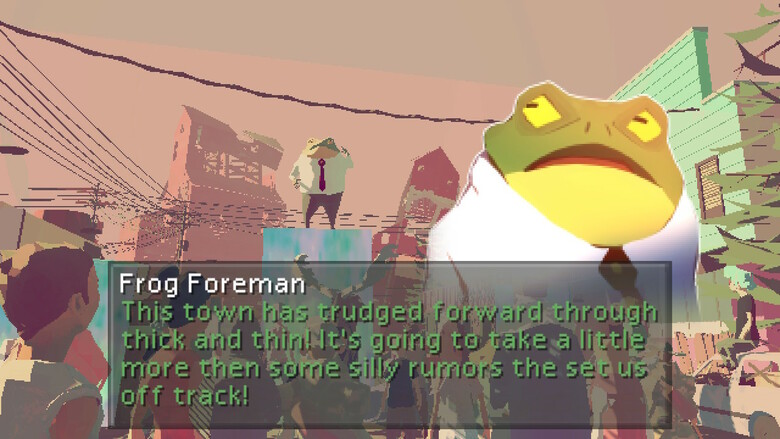 Frog Foreman, despite his looks, is a grounded, complex and not at all cartoonish character

This mix of an extremely peculiar setting and relatable stories had me glued to Boreal Tenebrae at first. I found myself playing for large chunks of time, unwilling to turn the game off. My enjoyment of the game was also bolstered by a series of straightforward, but engaging and well-integrated puzzles that kept the adventure moving.

A good example of the puzzle gameplay comes halfway through the adventure. This is where you’ll learn that a certain ritual needs to take place, and specific items are needed to complete it. It’s mostly a fetch quest, but you’ll need to work your way through a few previously-unseen areas that are unlocked by props you’ve come across in other areas. While you might have thought these props were one-use items only, these new sections show that old items can offer up new solutions. Once you learn this fact about items, it helps you to see how new areas can be accessed, making for a very natural feeling of progression. This particular quest has great pacing, and supports gameplay and world-building in equal measure. 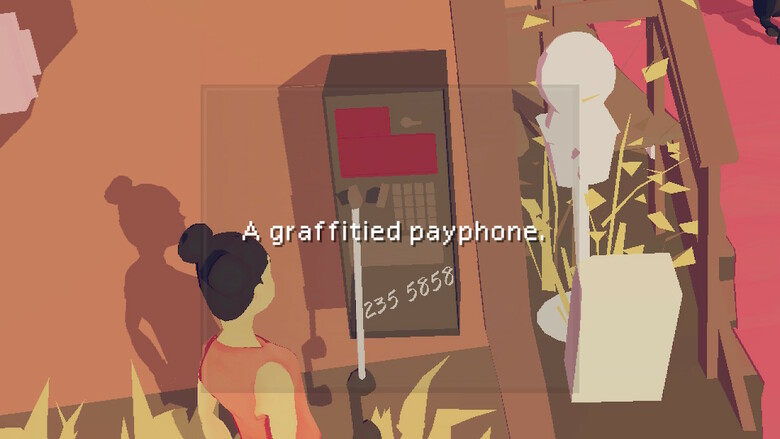 Optional character moments and sequences are available to the player, if they know where to look

Another interesting aspect of puzzling is the fact that inventory is shared between all characters, meaning you’ll have puzzles spread across multiple characters and locations. This works very well mechanically and allows for some interesting conundrums, but one item in particular makes little sense; the camera. Early in the game, the camera is given out along with a request to take photos of icons as you find them. You’ll be given character backstories as the reward for tackling this. However, when the story swaps to a different character and they see an icon, they seem to be fully aware of what the camera is and how it’s used. This surprised me at the time, as it’s one moment of incongruity in an otherwise harmonious adventure.

The presentation is interesting as well, with a low-res FMV clip kicking things off before you even get into the game. This certainly sets the tone, as right off the bat, you’re expecting a rather retro-looking aesthetic. The in-game graphics are clean and crisp, but use a low-resolution filter to recreate a PS1 style image, which is only enhanced by the 4:3 display ratio. At key points, FMVs return to further the story, but other moments go with in-game cut-scenes to handle narrative beats. Those in-game engine moments, along with the game itself, perform admirably on the Switch. This performance is no doubt helped by fixed, but flexible camera angles that are reminiscent of Resident Evil: Code Veronica and Silent Hill. 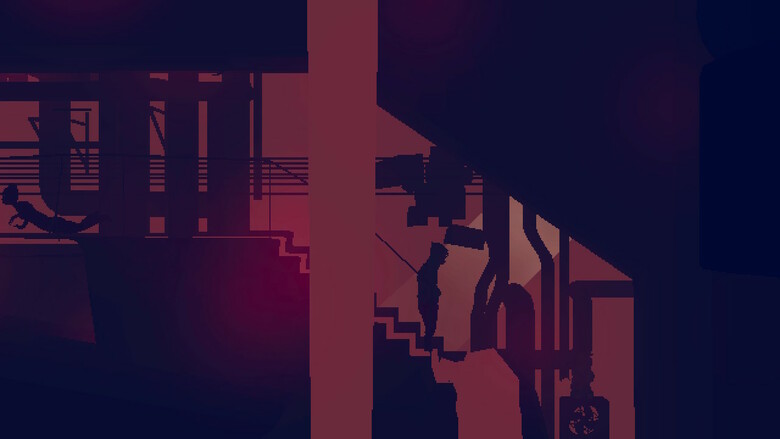 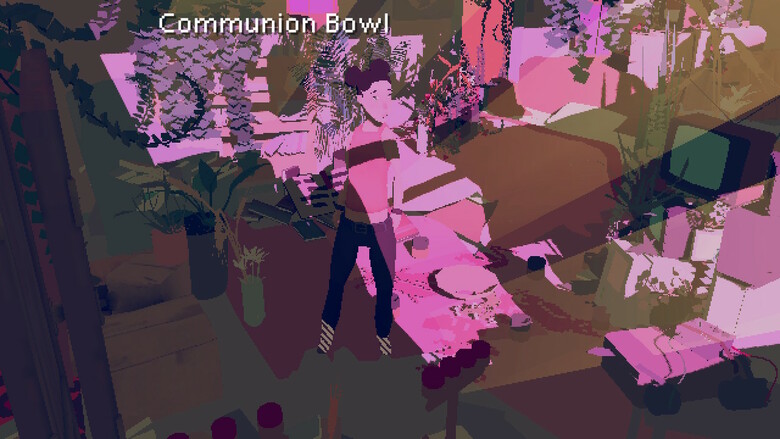 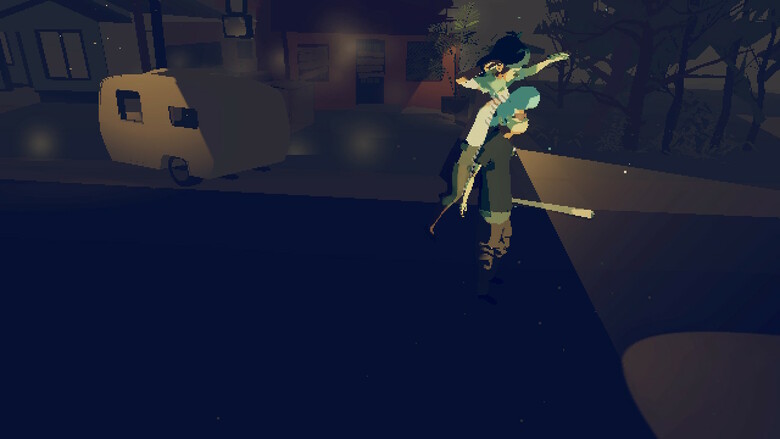 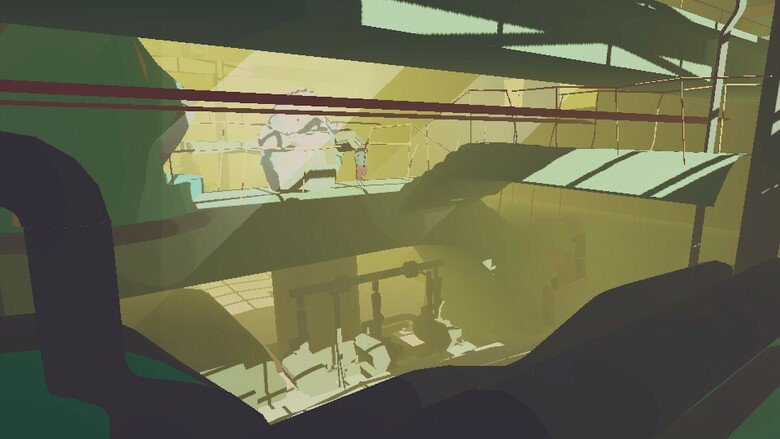 Controlling your character within these camera angles, though, is very difficult. The classic point-and-click adventure gameplay has been mapped to modern controls unintuitively, and the game seems to have a problem with collision detection. This is only made worse by invisible walls meant to keep you from wandering where the developers don’t want you to go. This all creates a level of confusion and annoyance with simple things like walking.

A frequent occurrence involves coming to an unexpected stop while walking in a direction. You’re left wondering if you are being blocked on purpose, or if a small piece of the gameplay area is getting in the way. Sometimes trying to walk around the blockage gets you stuck on a new piece in the scene, and now you’re completely unable to move. At these points, the only option you have is to close the game and reload. Hopefully the game auto-saved recently!

This threat of literally bumping into a game-ending bug is ever-present. During my time in Dusky Rivers, I had to restart the game for multiple reasons, including being stuck inside a piece of scenery, being stuck between two scenery objects, being stuck inside a menu, being stuck in a never-ending load screen, being stuck in an area I shouldn’t have been able to access yet, and so on. This practically destroys any will to hunt for clues, which in turn prevents the feeling of momentum, and finally, immersion. This wonky feeling also made me question if some things were deliberate design choices, such as a character floating 2 inches above the ground. Is that a bug, or something that’s meant to be sinister? At this point, issues with the software had completely undone the good work laid by the narrative and puzzles, rendering my remaining time a slog. 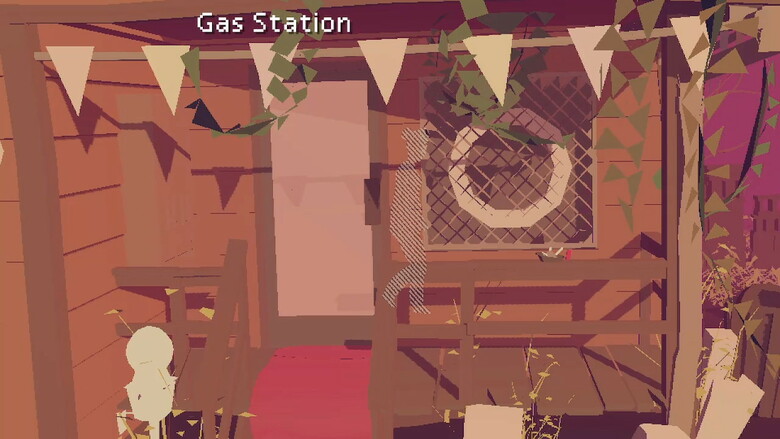 Stuck in an area collision detection shouldn't have allowed me into... 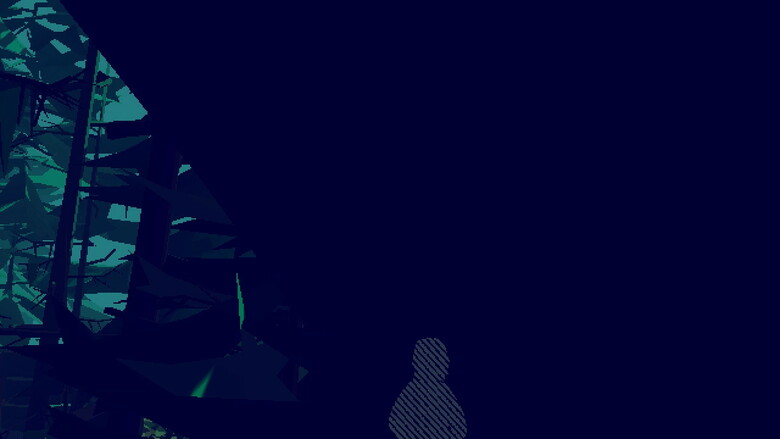 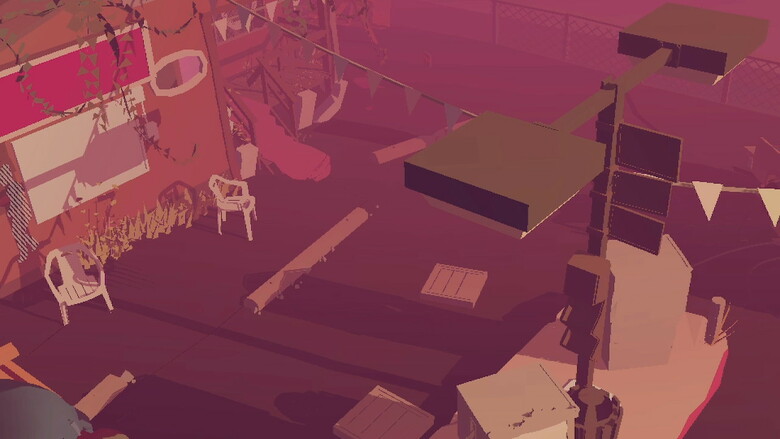 ...and again. Too many of these bugs are present, and force you to restart or reload.
View All

While I don’t want to go on to call out every technical shortcoming I happened upon, there was one that ended my hopes of seeing the story through to the end. After an accidental sequence break caused by a different bug, I couldn’t trigger the next progression event. The last manual save I had was over 2 hours prior, and by this point, I was simply worn down by my fight against the bugs. I could have resumed from my previous save, but given the frequency of glitches and the numerous restarts (thanks to lucky autosaves), I was eventually unwilling to take the gamble.

Praise can be given to world-building, art direction and narrative choices, but it’s all moot if a game’s technical aspects don’t allow you to engage with them as intended, or in some cases at all, as is the case with Boreal Tenebrae.

Not being able to complete Boreal Tenebrae is a huge disappointment, but my time with the game was still almost worth it due to what I was able to see and do during gameplay. Had Boreal Tenebrae been put together in a more technically sound way, we could have gotten a true indie darling and a breakout hit for the developer. As it stands right now, Boreal Tenebrae is nothing more than broken promise.