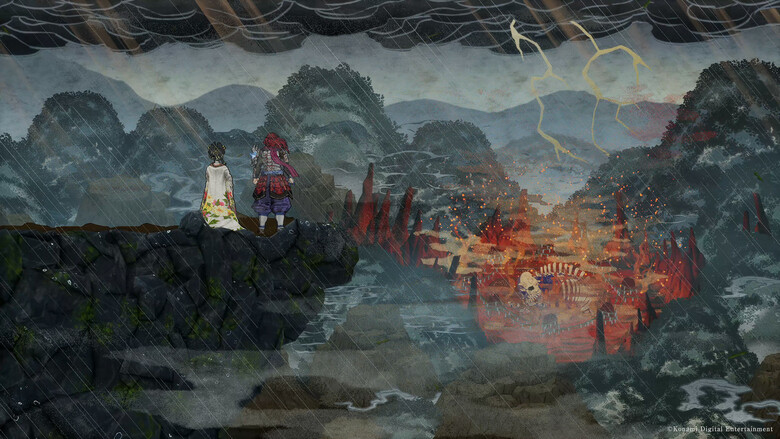 GetsuFumaDen: Undying Moon has received a sizable update, bringing the game up to Version 1.1.0. You can see full patch notes for this update below.

Polearms have been added as the new main weapon. Polearms have Parry as their unique ability. Polearms are extraordinarily well-rounded weapons that have high damage output and substantial reach, while also being able to guard, parry enemy attacks, and grant Counter Slash with their unique action.

Among the five Polearm variations, Rusted Sword and Gleaming Great Katana will already be unlocked. The respective Armor Scrolls for Great Severer, Raging Stone Flame, and Omodakamaru, the Bloodthirsty Great Katana can be found as drop items and will be needed in order to unlock them. As such, Polearm Fragments and the Armor Scrolls for Polearms have been added as drop items. Talismans have been added as the new subweapon.

Talismans grant passive effects when they are equipped, but do not have any active modes or triggers. Make use of the various empowering secondary effects that Talismans provide to tackle any situation. Among the nine Talisman variations, Primal Refuge Talisman and Talisman of Inner Blinding will already be unlocked. The respective Armor Scrolls for Wisdom Talisman, Divine Toxin Talisman, Hellfire Talisman, Carnage Talisman, Frost Armor Talisman, Vampiric Talisman, and Afterlife Talisman can be found as drop items and will be needed in order to unlock them.

As such, Talisman Fragments and the Armor Scrolls for Talismans have been added as drop items. Mastery 2 and Mastery 3 level Training Manuals and Mastery Books will now drop from Veteran onwards.

In order to unlock Devotee, the item of proof dropped after clearing the Veteran difficulty needs to be collected.

*You will need to collect the item of proof even if you have already cleared Veteran.

The newly added enemies will appear from the Devotee difficulty onwards.

Specialty Weapon Type has been added as a new feature.

By using Specialist Weapon Type, the weapon racks in the Getsu Clan Estate can now be optionally set to provide weapons already unlocked.

Weapons desired can be set through the menu within the Hall of treasures.

New aesthetic effects will now occur when Flash is triggered.

You can turn this effect off through a new setting within the options menu.

An icon in the HUD will now display the status of Rampage.

After performing an aerial attack during your first jump, you may now perform another set of normal aerial attacks or a unique action upon double-jumping.

*Unique actions that bring the user to the ground are unaffected by this change.

Adjustments to the Flash mechanic.

Triggering Flash on a non-boss enemy will now also trigger the Lethal Slay or Rampage effects depending on the weapon used.

Deals a percentage damage of the target’s health scaled to the selected difficulty.

Lethal Slay will deal damage equal to 100% of enemy max vitality in Commoner, but is reduced for every difficulty after.

Also, landing Lethal Slay against enemies within Nurarihyon’s area of effect will now cause the damage inflicted to ignore the damage reduction granted by Nurarihyon.

Each time Flash is triggered on an enemy, the amount of damage that enemy will receive from further attacks gradually increases. The damage modifier imposed on the enemy will remain until the playable character is struck by any enemy.

This modifier also applies to the normal attacks of certain weapons that do not trigger Flash. Training skills count towards the overall effect of Rampage.

*No changes have been made to triggering Flash on bosses.

The distribution of Flash effects between weapons is as follows.

Adjustments to the Counter Action mechanic.

The Projectile Parry effect can be utilized by both Battle Umbrellas and Polearms.

The effects of each mechanic are as follows.

Damage Absorb: Heal for an amount based on the player character’s maximum Vitality upon a successful parry.

Damage Absorb cannot be triggered until a certain interval of time has passed since it was previously triggered.

Note that Projectile Parry has no effect on certain enemy projectiles.

Counter Slash: Increase damage inflicted by a player’s first hit for a limited amount of time after successfully guarding from an enemy attack.

Adjustments to how guarding with the Battle Umbrella and Polearm functions.

Damage received when utilizing a unique action with a guarding function has been significantly decreased.

Guard breaks have been adjusted to now occur more frequently.

Gauntlets: Base damage and Break damage values have been significantly increased.

Enemies are now launched at an adjusted direction and height by the 4th normal attack strike, allowing for easier follow-up aerial attacks.

Matchlocks: The base damage value and damage per rank have been reduced for Nationfeller, the Great Cannon.

Explosives: Base damage of all Explosives has been reduced.

Caltrops: It is now possible to strike aerial enemies.