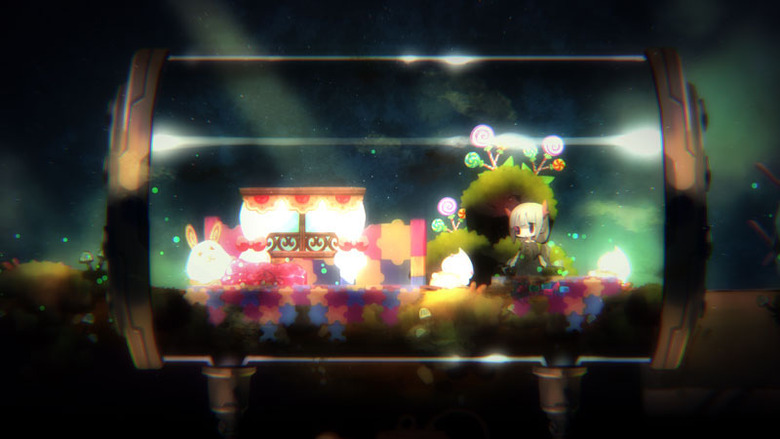 Nippon Ichi Software has shared a new round of screens for Void Terrarium 2, along with information on the game’s enhanced dungeon expeditions. You can check out the entire slew of new screens here, and read on below for a breakdown of how dungeons work.

Just as in the first game, Void Terrarium 2 will have you entering dungeons to find items needed to take care of Toriko. Just like last time, these dungeons, called Zones, are randomly generated. Fight off both machines and creatures out to get you, collect goodies, and then venture back to your terrarium.

Each time you enter a Zone, you’ll be given a series of “skill draws” that are also random. These skills can make or break a run through a Zone, but leveling up will give you access to new skills. Eventually, you should have a collection of skills that’ll help you dominate a Zone no matter what you randomly draw. You can also earn Craft Bonuses with the materials you collect in a Zone by using them to build items. Thankfully, if you die while out in a Zone, you’ll still return to the terrarium with your goodies intact.

No matter what Zone you wind up in, you’ll have to fight your way through it. The more you fight, the more proficient you become with a weapon, which makes you stronger with that weapon overall. You’ll also gain Passive Skills through this, which make you even more formidable. Weapons and skills you’ll find while out and about include Drill, Fire, Tentacles, Dive, Divide, Portal, and more.

If’s up to you to decide which Zone you want to head to. You can pick at random, or make your choice based on Weather Blight, which makes for more vicious enemies due to pollution. Zones will also offer multiple routes, as well as stat buffs like “ATK UP” and “EXP UP.” Be on the lookout for secret Zones and mystery rooms as well!