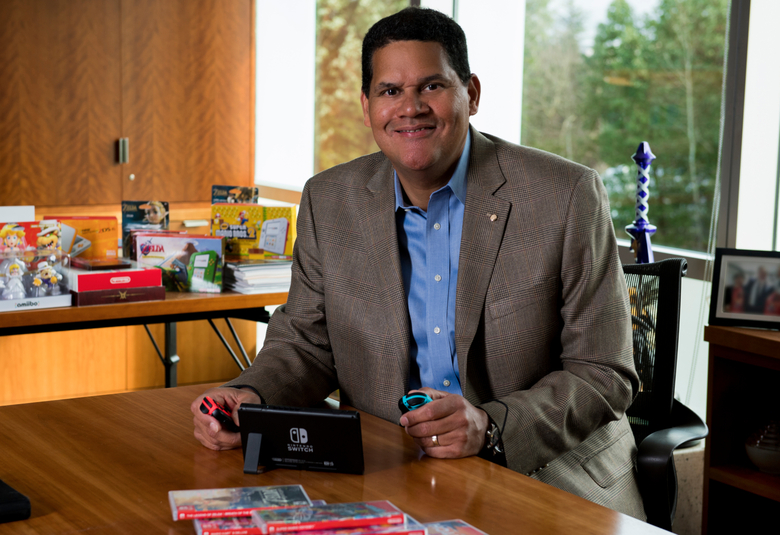 Nintendo always does things their own way; sometimes to their benefit, and other times to their detriment. While there are a number of things you could point to where Nintendo forges their own path, the world of online play is certainly one of the biggest.

Nintendo doesn’t offer anywhere near the same experience that Sony and Microsoft offer in terms of online play. While Nintendo is very, very slowly getting towards online parity, they still have an extremely long way to go.

In an interview with Geekwire, Reggie Fils-Aimé was asked about why Nintendo approaches online the way they do. Reggie came back with a two-fold answer, which you can see below.

“So I’m gonna answer the question from two vantage points. First, Nintendo’s business philosophy has always been to do things differently, to innovate in ways that played to the company’s strength versus playing to the strength of others. And so for example, when it came to multiplayer, Nintendo really excelled in what we called internally ‘couch play’ – sitting next to someone playing Mario Kart, sitting next to someone playing a variety of different games like Wii Sports. That in-person multiplayer really was a place the company excelled, and that’s where it placed a tremendous amount of focus.

In order to do online multiplayer, the company really needed to think about what’s the new type of game, what are the different types of experiences that we’re gonna need to create in order to now excel in that form of play. And candidly, it took the company a while to think that through, to come up with something that they believed would be fundamentally different and add value in a new way. I would argue the company’s core success started with their taking Smash Bros. – a key franchise for them – taking that online, which did exceptionally well. That begat a, not quite a first-person shooter – kind of in between a first and third-person experience – with a franchise called Splatoon, which has done incredibly well in the marketplace. So that’s the first part of the answer – the company’s always thinking about how they’re going to enter these markets uniquely, differently, and play to their own strength.

The second thing I would highlight is – and this is where it gets into some of the cultural differences. Culturally, the company didn’t see a huge opportunity in online. It was an area that the Americas and Europe constantly was trying to educate the company in Japan about the value of online play, investing in the online infrastructure which needed to be done in order for the experience to be a positive one. You’re absolutely right that of the three main hardware competitors in the video game space, this is where Microsoft invested so significantly, and it became their competitive advantage – it still is today I would argue in terms of their connected gameplay. It was a constant area of push by the western parts of the company to encourage the development and the investment in the infrastructure, and I’m sure that conversation continues today.”

While Nintendo’s approach to online might not be everyone’s cup of tea, it’s hard to argue with their line of thinking. Nintendo’s handling of online play and other features may bring about gripes online, but it’s hardly held them back from success. Over 107 million Switch units have been so so far, which certainly seems to indicate that Nintendo’s online offerings on the platform are tolerable, at the very least, for the majority of consumers.