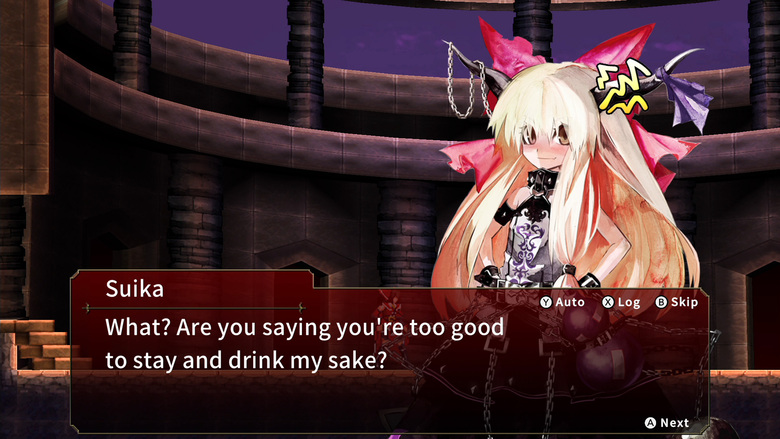 A new “Extra Easy Mode” was revealed for players who are not very familiar with these types of games, or would like some help to better navigate the game. A third partner for Reimu, Suika Ibuki was also introduced, you can summon Suika to set fires on the floor. The game will also feature in-game challenges for players to complete. Check out the full details below.

Suika Ibuki (voiced by: Miho Okasaki), the party & alcohol loving “oni”, fights alongside Reimu as her third partner! Head to the top of the Scarlet Devil Castle together, and use her unique partner attack to set the enemies on fire, at the cost of Souls.

Summon Suika to start fires on the floor

The higher the difficulty level rises, the sturdier and stronger the enemy becomes. For gamers who are not familiar with action games or can’t get used to Koumajou Remilia: Scarlet Symphony’s difficult gameplay, the “Extra Easy Mode” has been added to help them navigate all the way to the ending. This mode can be selected from the beginning in the options menu.

The Nintendo Switch and Steam version contain bonus elements for enhanced gameplay experience. One of them is in-game challenges (or “Achievements”), which can be discovered in various ways as gamers set out to the Scarlet Devil Castle. Also, they can replay previous events and music in the “Collections” menu.

Koumajou Remilia: Scarlet Symphony is a 2D side-scrolling action game that features the characters from the Touhou Project. Since the initial release, the game has been highly praised for its quality gameplay and music as well as Banpai Akira(晩杯あきら)’s sharp and gothic reinterpretation of the Touhou characters.

The game is scheduled to release on July 28th, 2022, for the Nintendo Switch.