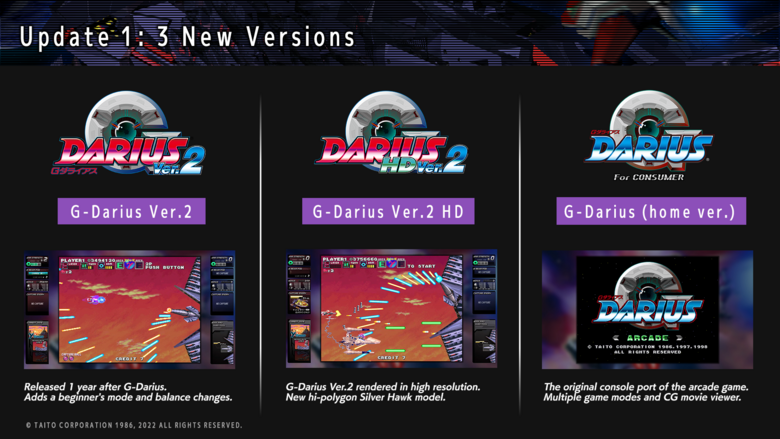 A few weeks back, we mentioned that G-Darius HD was getting a free content update with a host of new features and tweaks. That content update is now available, and you can get a complete refresher on what it includes below.

In addition to the two versions that are already part of G-Darius HD - which are 1997’s G-Darius and its high-resolution version G-Darius HD - TAITO’s major update adds three new awesome versions that will delight retro fans and owners of the game for both, Nintendo Switch and PS4.

G-Darius Ver.2 was first released in 1998 and is an updated version of the original G-Darius which was initially published one year earlier. While the story remains the same, G-Darius Ver.2 comes with a beginner mode, rapid-fire function and a lot of adjustments to the gameplay.

Besides the three new complete versions of G-Darius, there are several new gadgets, modes and settings that will be implemented in G-Darius and G-Darius Ver.2 that improve your gaming experience. Learn more about the weaknesses of the enemy bosses with the Boss Gadget, improve from an overall Zone Map and keep track of the remaining time until YAZUKA appears with the Yazuka Timer!

Customize your parameters to train for the real battles in a newly added Training Mode and check out your most glorious fights in the Replay Gallery.

For a detailed list of all the amazing new features and content, check out the G-Darius HD gamepage.