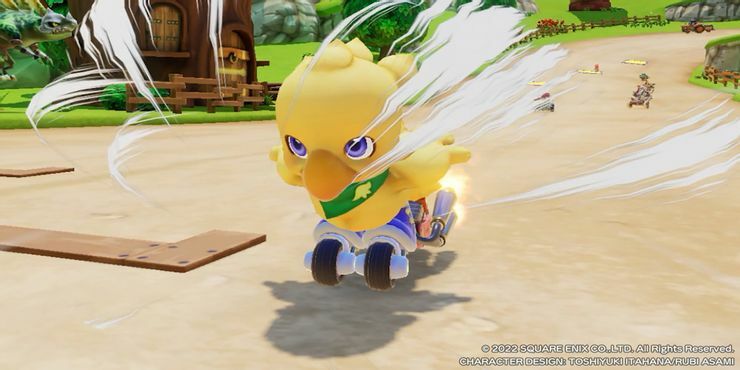 As you probably know, the launch of Chocobo GP has not gone smoothly. Many fans were taken aback by the implementation of microtransactions, along with the hours required to unlock some content. The backlash was so loud that Square Enix released a quick statement within 24 hours of the game’s launch. Since then, Square Enix has shared a much more detailed statement.

The laundry list of changes, which you can see below, goes over 6 specific areas; bug fixes, scores for prize levels, new characters, new tracks, Mithril products, and balancing. Fans can see that some changes have already been made, and more are coming in the near future. Read the full statement below to get a complete breakdown of what’s to come.

Thank you for playing Chocobo Grand Prix. We are currently receiving many inquiries, and we would like to inform you about the status of various problems and future updates.

[Countermeasures for problems that are currently occurring]

a. Bug when purchasing items due to application version difference b. At the time of matching, some players do not go into the READY state and cannot proceed to the race c. The start timing of the race does not match d. The state that does not meet the specified number of laps

We are investigating the cause of each problem and taking corrective action. He wants to be able to update as soon as possible, but stay tuned for more updates. In response to the fact that there are cases where Chocobo GP mode cannot be played normally, the following measures have been taken ahead of schedule today.

It will be relaxed from the current achievement level or later. Depending on the condition, the level may be raised immediately.

Also, as an apology for not being able to play Chocobo GP mode normally, we have distributed 500 Mithril to everyone. For customers who have contacted the inquiry window due to the influence of defect a, we will contact you individually in sequence.

The season is scheduled to change about every two months. Updates will be made at the timing of the season change. The main contents planned for the update are as follows.

In addition to the 24 characters available only in the product version, we plan to add 2 characters for each season. In the current season 1, the following his characters are available.

Possess the “Squall” product version + Sold at “Gill” which can be obtained in Chocobo GP mode etc.

Items added to the Gil Shop will be added each time the season is repeated. “Cloud”: You can get it by possessing the product version and prize pass + playing Chocobo GP mode and raising it to prize level 60.

Prize level reward items are seasonal limited items that are updated every season. As a consideration for players who will start later, we are considering re-appearing in another form. From Season 2 onwards, 2 characters will be added by the same rule.

We plan to add new courses that are available to all players, regardless of whether they are Lite or commercial versions. The latest additions are planned for Season 2. The coverage of the additional courses is based on the range of features available in the Lite and retail versions.

In Season 1, his costumes of Chocobo are lined up in his Mithril shop. We plan to add some more in the middle of the season, including BGM and his seasonal costumes.

In Season 1, he can get Mithril by distributing it with a login bonus and purchasing it directly, but after Season 2, he will also be able to get it as a prize level reward.

We may need to adjust the character’s balance to maintain a healthy competitive environment, and modify basic functions to improve playability. If an immediate fix is ​​needed, the policy is to update without waiting for the season switch timing.

We apologize for the inconvenience caused to the players due to problems with the battle function and lack of advance notice. The development team will work as one to deal with any defects so that they can be repaired as soon as possible.

We have also received many comments on how to provide additional DLC. We take this seriously and will continue to do our best to provide updates that will satisfy everyone who purchases.

First of all, he raised the prize level in Chocobo GP mode and changed to an easy specification. Overall it’s been greatly relaxed, especially he’s made it easier to get up to level 100, so I’d appreciate it if you could get the cloud and his machine.

With the team stickers available with prize level rewards, he’s an image of an average of one game going up one level if the wins and losses are flat. In this way, our new basic policy is to create an environment in which it is easy to obtain additional characters simply by purchasing the product version.

On top of that, we are thinking of placing things that are unlikely to affect gameplay, such as costume changes, in higher rewards, Mithril shops, and so on. These are not the only decisions to be made, and we will continue to brush up on the opinions we have received.

We are also considering removing some restrictions on the Lite version to make it easier for video distributors to hold events, so please be patient.