A monstrous breakdown of things to come

During the their 2022 showcase, Capcom shared a wealth of information about Monster Hunter Rise: Sunbreak, an expansion that’s set to launch on June 30th, 2022. New details on what’s included, news of a demo launching tomorrow, and a look at what’s ahead for the game after the DLC’s launch were all covered. You can find the complete details below.

Welcome to the Jungle

The Jungle area from the second generation of Monster Hunter games swings into the hunt! Now in Sunbreak, you’ll be able to venture your way through the region’s scenic sandy shoreline, all the way to the lush and dense greenery that challenging monsters call home.

Exciting hunts await you in the Jungle, featuring veteran monsters and fresh faces. Speaking of monsters…

We’ve already revealed a few monsters coming in Monster Hunter Rise: Sunbreak, but of course there’s still plenty more to share. How about we start with a highly requested (and VERY exciting) fan favorite?

Say hello to the flagship monster from Monster Hunter 4 Ultimate, Gore Magala! There’s a lot of you experienced hunters out there who have been asking for Gore Magala’s return, so hopefully this reveal had you on the edge of your seat. This sinister six-limbed blind wyvern brings its signature Frenzy Virus to the battle, marked by the black and purple mist it scatters.

Espinas, the Thorn Wyvern, makes its grand return to the series. For many this might be your first introduction to Espinas since it’s only appeared in Monster Hunter Frontier. Its signature venomous pink horn at the front of its head poses a serious threat. And if that wasn’t enough, Espinas can unleash powerful toxic fireballs. It may look threatening at a glance, but this monster loves getting its beauty sleep and hitting snooze – absorbing a few attacks before finally waking up.

Is that some kind of cave demon? Nope! Turns out, Shogun Ceanataur isn’t the only carapaceon coming to Monster Hunter Rise: Sunbreak. Today we revealed a small look at the returning Daimyo Hermitaur. Your attacks will be useless when it uses its massive claws to form a tough shield. Those claws aren’t just for defense, either – they could rip a hunter apart! Concentrate, and focus on your hunting techniques with this one…

Eagle eyed hunters might have had suspicions that a new Rakna-Kadaki subspecies was discovered. We’re excited to finally share the details. Meet Pyre Rakna-Kadaki, a fiery subspecies that turns up the heat with flame infused silk strands and, of course, superheated Rachnoid.

Your chance to go hands-on with Sunbreak is almost here. The demo for Monster Hunter Rise: Sunbreak releases on both Nintendo Switch and Steam on June 14 shortly following 7 p.m. PDT. Explore the new Jungle region, go toe-to-toe with a few Sunbreak monsters, and try out new hunting actions.

If you’re new to Monster Hunter Rise or just looking to clear out your hunting cobwebs, the beginner hunt against a Great Izuchi and the intermediate hunt facing off against a Tetranadon are great entry points to learn (or remember) the basics. There’s also a few training quests to get you familiar with the game’s mechanics, including the new Switch Skill Swap.

Want to step things up a notch? With the expert difficulty, you’ll be challenged with slaying the electrifying Astalos, one of the new monsters in Sunbreak.

It wouldn’t be a Monster Hunter demo without a big challenge. Try battling Sunbreak’s flagship monster Malzeno in a super tough advanced quest! Remember, this hunt is a special challenge tuned just for the demo, and has a shorter time limit than what you might experience when the full game comes out on June 30. That said, it’s a great way to test your skills and square off against this powerful new monster. 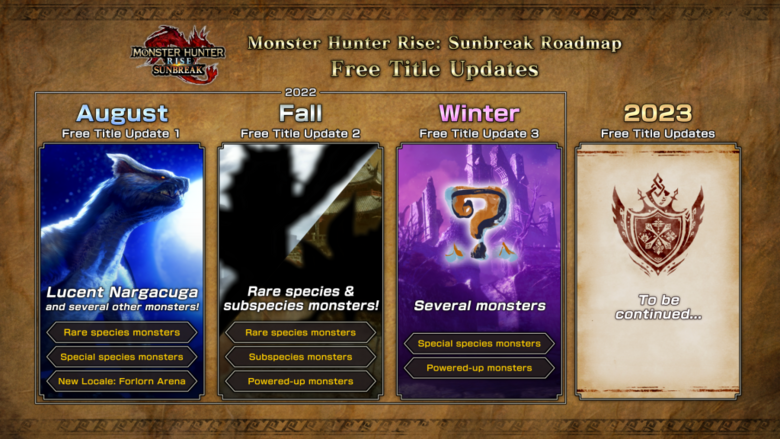 A Sneak Peek at the Future…

Thought we were all done? Not quite. Free title updates for Sunbreak are on the way!

A tower illuminated by moonlight marks the backdrop for a returning locale: Forlorn Arena. Also appearing seemingly out of thin air is the azure scaled Lucent Nargacuga. We’ll have much more to share about the August update in the future, but for now we’ll keep things shrouded in a bit of mystery.

The August update is just the first free title update coming to Sunbreak. There’s more on the way in 2022 and beyond. Take a look at the update roadmap for a preview of what’s to come.