One Versus One Thousand Issues 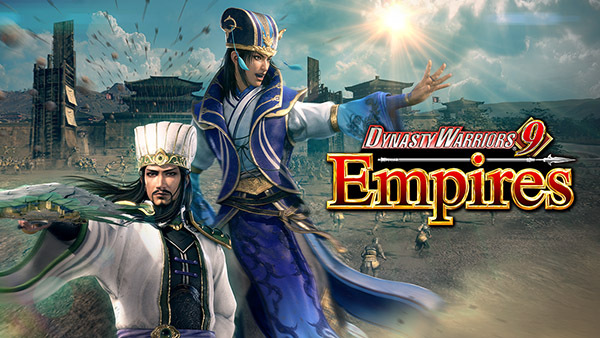 Hyrule Warriors: Age Of Calamity served as a retelling of the events prior to Breath of the Wild’s Great Calamity, and it worked perfectly with the muso “One Versus One Thousand” gameplay style. A large, varied character roster, easy-to-learn combos with intense power, and expertly-crafted levels resulted in a game that felt truly special.

Hyrule Warriors is a spin-off of Koei Tecmo’s longrunning Warriors series, and the enjoyment I got from that game made me quite eager to play Dynasty Warriors 9: Empires, a sub-series in the mainline Dynasty Warriors franchise. I went in expecting to have a fairly similar experience to Hyrule Warriors, just without the Zelda trappings. To my disappointment, I was left feeling none of the love I got from Age of Calamity. This wasn’t for a lack of trying, either. I really did want to enjoy Dynasty Warriors 9: Empires, but it just didn’t live up to the high bar previously set by Nintendo and Koei Tecmo’s collaboration.

It’s important to note that the Empires sub-series of Dynasty Warriors is different from a mainline Warriors game. Instead of a base set of levels to fight through, Empires titles add in strategy and kingdom simulation elements. The main (and only) game mode, Conquest, puts you in the role of the territory leader who’s looking to expand their reach, gain allies, and recruit new warriors for battle. All of your actions occur on a month-to-month basis, with a War Council taking place every 6 months. During these War Councils, you can set a series of goals to achieve. If you succeed in accomplishing these goals, you’ll be given additional bonus resources. 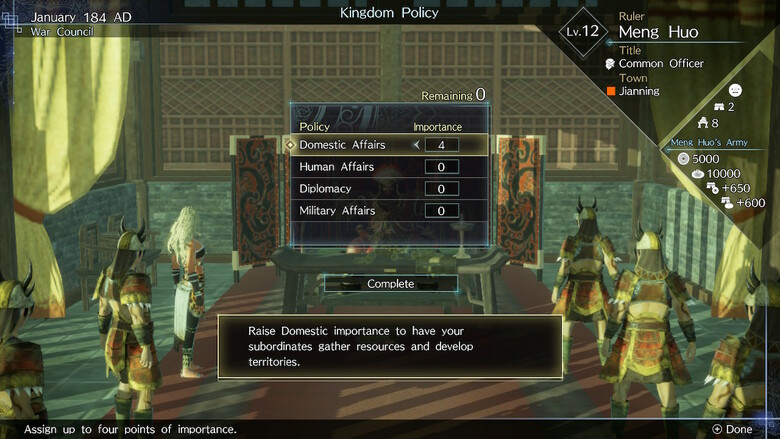 One of the many menus found in Conquest mode.

A considerable portion of the actions you can take during a month amount to nothing more than navigating through menus and choosing resources you’d like to increase, along with the methods of attaining them. That’s not to say all of your monthly actions are handled through menus, as some do have a bit more depth, but you’ll certainly spend the majority of your time clicking away. Thankfully, the game starts to pick up once you move away from resource gathering and begin interacting with other territories and units.

When expanding your empire, you can opt for a diplomatic approach, which lets you send units to opposing territories in an attempt to gain allies. Units have varying rates of success, so strengthening relationships and forging new ones is a must in order to thrive. One major way of doing this is through journeying with your units in the open world. When paired with a unit, you can expect to fight bandits and hunt animals to increase your territory’s resources.

Unfortunately, that’s all there is to the open-world component. The open-world setting is one of the worst ways to experience combat, as it feels rather dull and lifeless. There are no real objectives to complete or places to explore. Instead, you’ll randomly stumble into fights with small groups of bandits, or roving bears. Despite the different kingdoms and multiple locations scattered about the map, you’ll find they all offer more of the same. Out of all of the places I visited during my playtime, I came across a single NPC to interact with, and their lone line of dialogue had no real bearing on the game.

Dynasty Warriors 9: Empires could have been substantially improved if one of its main selling points was fleshed out just a bit more. Something as simple as giving your units requests to complete while traveling with them in the open world would have made things much more enjoyable. Sadly, what we are given just isn’t enough. 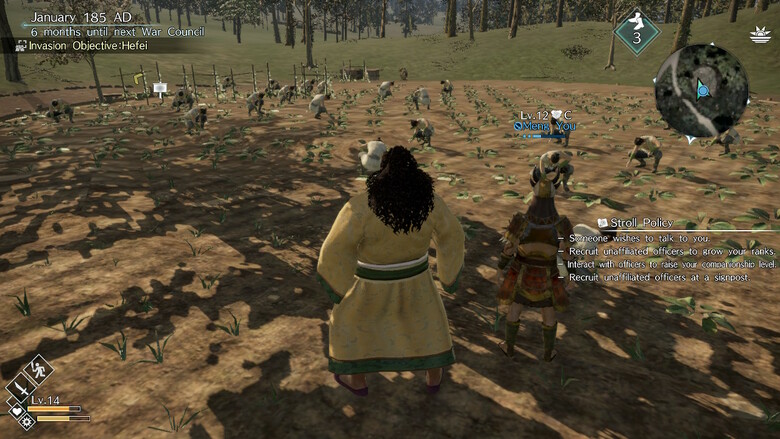 A small farm location where all NPC's were strangly in-sync. 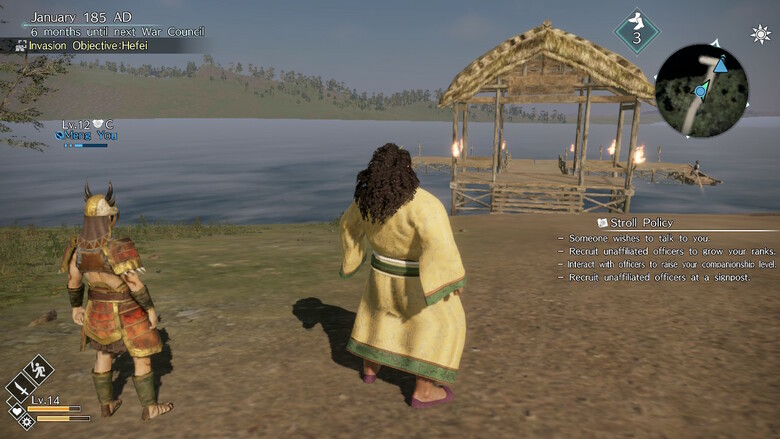 A small dock used to travel to other parts of the map.
View All

If you’re looking for a more traditional muso-style experience, you must attack another territory, or defend from an oncoming attack. When a battle like this occurs, all of the staples from past Warriors games are present, but severely watered down. Each map is contained within a small square, with the main castle and a few smaller outposts spread throughout. When attacking, your main goal is to capture outposts that contain siege equipment, such as catapults and battering rams, to break through the castle gates and defeat a boss. Doing so will give you control over the territory. When defending, you are trying to stop the invading forces from successfully breaching your walls, which is accomplished by taking their outposts that house siege equipment. To aid you in battle, you can select from a variety of Secret Plans, which will serve as optional goals. Working towards completing these goals, while not required, will boost the likelihood of victory.

Overall, the battles are standard for a Warriors game. Claiming outposts and defeating specific enemies is the go-to way to win an encounter. To claim an outpost as your own, you must fight through large groups of enemies until you kill the outpost’s captains. Unsurprisingly, most enemies are nothing more than cannon fodder, offering little to no resistance. To keep the combat interesting, the opposing force has its own heroes that are much closer to your power level.

While heroes improve the level of engagement in battles, their AI isn’t the greatest, and the power scaling is all over the place. Too often would I find myself either absolutely decimating the hero characters, or being decimated by them. Having a variance in the difficulty of your opponents is important, and makes sense in the context of the game. You can see why certain territories would be stronger than others, but the approach of facing hopelessly underpowered or nearly invincible attackers simply doesn’t cut it. 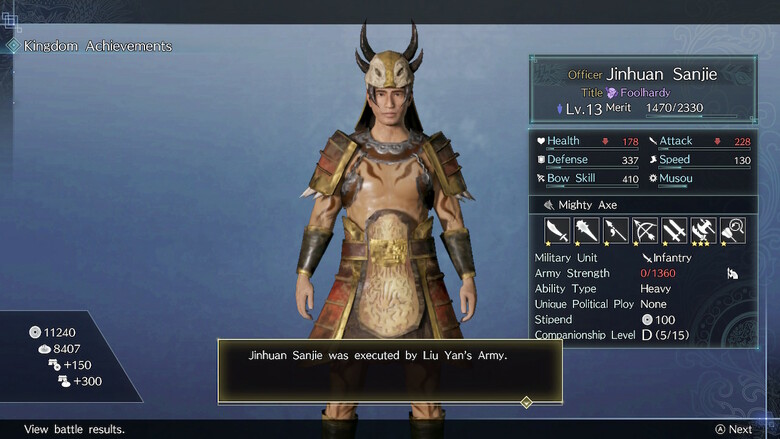 Failure in combat can result in the deaths of your characters.

Even with my disappointment in the map layouts and enemy power scaling, I was hoping to find fun in the combat. To my dismay, combat felt very mindless, and not in an enjoyable way. For example, you have 3 main ways of kicking off a combo: stun, launch, and knock-down. This seems like a decent amount of variety for different attack setups, but after starting the combo, there are no options to keep it going. Starting a decent combo chain, and then not having any follow-up moves to keep it going, leaves the combat feeling stiff.

That said, there is one element of the combat mechanics I did enjoy. Equippable special abilities give you a customizable loadout of powerful options that can help out in tough situations. There’s a good variety of offensive and defensive options to pick from, which adds a much-needed element of strategy to battles.

Finally, there are 3 tutorials to teach you the ins and outs of combat. If you’re unfamiliar with Warriors games, consider these tutorials a must. The only problem here is that Conquest mode doesn’t have an in-depth tutorial, and it could certainly use one. I feel like I never truly understood how the mode worked, and a lot of my time was spent parsing menus and acquiring resources that I didn’t have a use for.

Regrettably, my issues with the game thus far extend into overall presentation. While graphics aren’t a huge deal to me in most games, I can still appreciate a nice-looking title, or have fun with a visually bland one. In the case of Dynasty Warriors 9: Empires, I actually found the graphics to be quite disappointing. I could sometimes look past this in the heat of battle, but for the most part, I found the visuals to be very distracting. This has a lot to do with extremely low resolution textures, and considerable pop-in. Even worse, the game’s framerate is quite choppy in almost all areas, and it only gets rougher in combat. During some fights, select enemies will lose all animation, or disappear completely.

Something the game did get right is character designs. A fair amount of playable characters are unique and memorable, mostly due to their exaggerated features when compared to standard enemies. Even the more normal-looking characters still shine, as they’re given creative, near inhuman weapons to fight with. There’s also a rather sophisticated character creator, but performance issues kept me from exploring it to the extent I would have liked. Changing any option reloads the entire model, which takes roughly 3-4 seconds every time. If you deeply enjoy character customization and have the patience of a saint, you could probably find a lot to enjoy here. 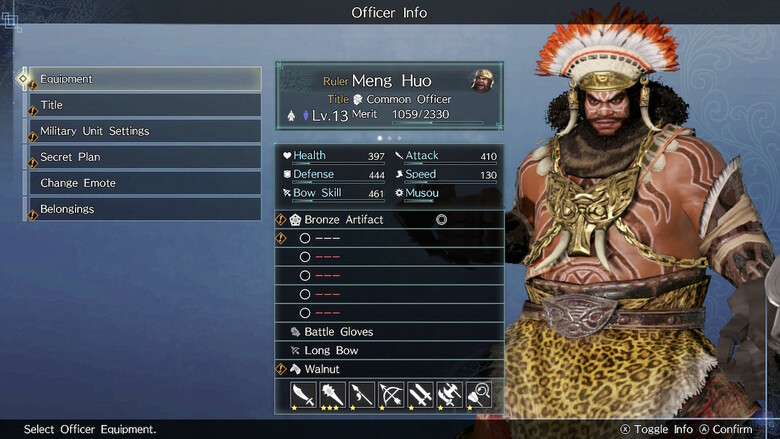 One of the pre made characters in the game.

While I have considerable gripes, I don’t want to be too harsh on Dynasty Warriors 9: Empires. I’m sure pre-existing fans of the Empires series could jump right in and find a lot of enjoyment, so long as they can overlook the technical issues. That said, if you were considering making Dynasty Warriors 9: Empires your entry point into the franchise, I’d have to strongly recommend against it. Every issue along the way, be it big or small, contributed to an overall unimpressive package. Mostly unsatisfying gameplay, coupled with a host of other issues, resulted in a confusing, and quite frankly, tedious experience that I can’t see myself returning to.