Publisher Rocket Panda Games and developer MAGES have launched Phantom Breaker: Omnia for Switch, and the game is priced at $39.99 USD. 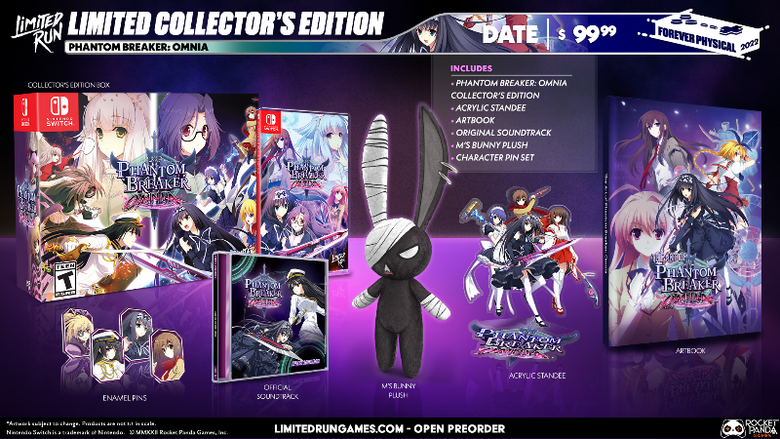 If you don’t want to go the digital route, a special physical Phantom Breaker: Omnia Collector’s Edition will be available for Switch, courtesy of Limited Run Games. The Collector’s Edition will feature a CD soundtrack, enamel pins, an artbook, acrylic standee, and M’s bunny plush. Please note that this $100 is in pre-production, so it won’t ship out for some time. Pre-orders are now available on the Limited Run Games website through April 10, 2022.

As for Phantom Breaker: Omnia itself, you can get a complete rundown on the game via the press release below.

A mysterious man named Phantom works from the shadows to lure powerful fighters into perpetual battle against one another. He bestows upon them mystical weapons known as “Fu-mension Artifacts” and promises the ultimate prize to the winner: a wish. Unbeknownst to these chosen hopefuls, however, their clashes shake the fabric of space-time itself, weakening the barriers between parallel universes and bringing Phantom one step closer to his own dearest desire—the return of his destructive powers and the end of the world.

The 3 different styles in the game can drastically change your characters’ speed, power, and mechanics.

The ability to pull off amazing combos and special attacks has never been easier as Phantom Breaker: Omnia’s fighting system has been overhauled and rebalanced.