Sympathy For The Devil? 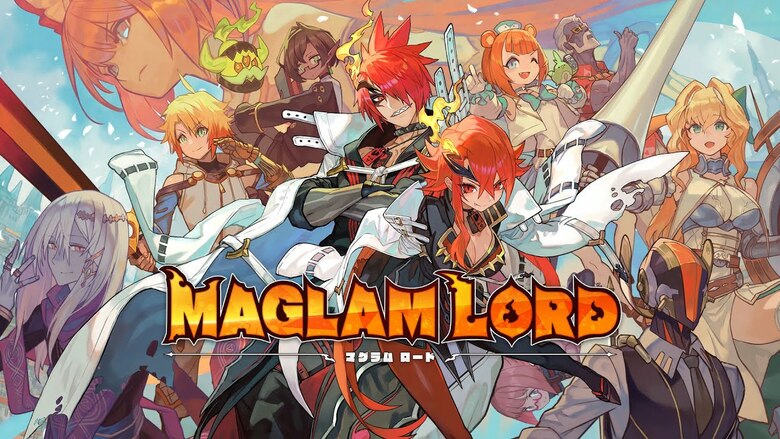 A 15-hour Visual Novel romp with charming characters, lightweight ARPG mechanics, plenty of weapon customisation, great anime styling and a minor emphasis on dating makes Maglam Lord an enjoyable partner to spend some time with – even if it does frustrate in a few under-developed areas.

Dropping you into the role of the last Demon Lord, Killizerk, who awakens severely underpowered in an unfamiliar time and place, Maglam Lord’s first hour teaches you various mechanics, play styles, and character backstories. After this series of events, you’re thrust into the main story and its mystery. It’s a bright and breezy introduction that gives you a peek at what lies ahead.

At its heart, Maglam Lord is a Visual Novel mixed with some supporting gameplay segments. In particular, the Visual Novel aspects really shine. Given the hours you’ll be staring at them, the characters are beautifully drawn in a traditional anime style, even if they’re only sparingly animated. The backdrops, from the town square to the home you’ll spend most of your time in, are equally well realized. (I’ll be getting the main town’s backdrop artwork framed for display, as I enjoy it that much!)

The story itself is fairly standard fantasy/mystery fare, with a supporting cast of characters who are funny, engaging, and enjoyable company. All of this personality is realized through simple text, as there is no English dub. In particular, the Demon Lord’s longest tenured servant, a 3-eyed floating ball of fire named Balga, has some genuine laugh-out-loud interactions with the rest of the cast. While Balga’s dialogue is a standout, writing for the entire crew is quite punchy, and even thoughtful at times. 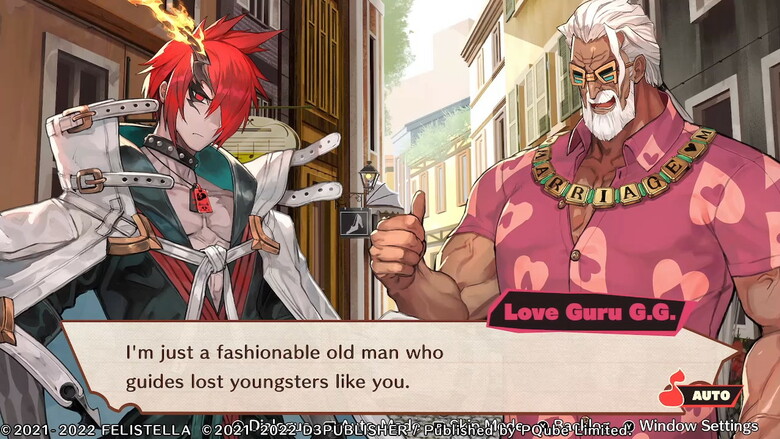 The Love Guru isn't suspicious from his very first meeting. Nope, not at all.

The pre-launch coverage of Maglam Lord made sure to spotlight the game’s dating aspect, as this is something absolutely paramount to Killizerk and the survival of his species. You’re introduced to the ins and outs of dating via GG, the Love Guru. As with other areas in the game, GG is very well written. In describing his purpose to the Demon Lord, GG comes off as quite funny, and rather impressively manages to sum up the concept of love in just a few sentences. The translators deserve a special nod, as their efforts expertly serve the story, while offering some genuinely insightful chatter about the human condition.

In its execution, dating in Maglam Lord is just side quest fodder. Presented in a straightforward Visual Novel format, there’s really no “simulation” aspect, and the only thing to do is choose the destination of the dates. That said, you can date almost anyone in the cast, and these interactions are definitely both amusing and engaging. Dating provides a gameplay outcome as well, as it lets you strengthen the bond between the Demon Lord and his followers. The higher the bond, the better the buff when battling with your partners.

Again, Killizerk has awakened severely underpowered, and he needs to regain his power through defeating monsters. Since Killizerk is too weak to do so on his own, he needs assistance. A deal is struck with those around him, allowing the Demon Lord to take the form of the Maglams; weapons that only non-gods/non-demons can handle. Other characters will do the actual battling while wielding those Maglams. In certain instances you’ll be able to pick a partner, but other situations require you to use a specific character. 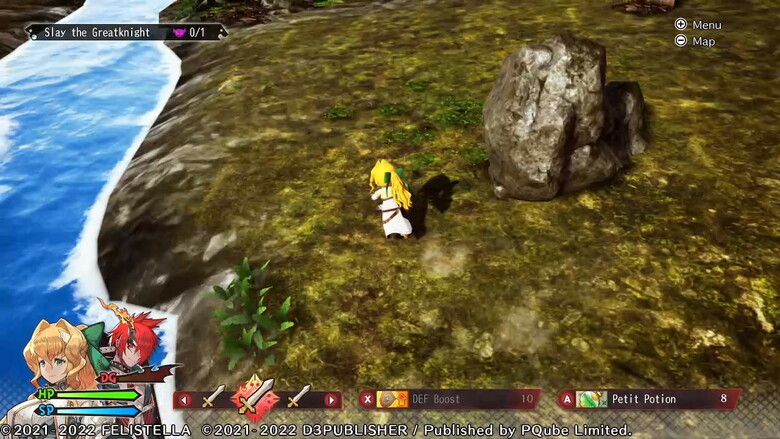 The graphics in the gameplay segments are certainly... present.

From the comfort of their home, the Demon Lord’s followers are able to pick up mission requests from the townsfolk. These requests fall into a few different types, but are all pretty generic. Find an item for someone, defeat a monster that’s been causing trouble, and so on. Missions are critical in generating XP for Killizerk and company, and they also offer a huge range of loot that can be used for item and weapon crafting.

Once a request is chosen, you’re dropped into an isometric view of the environment. Despite trying to look intriguing, these locations are built as, and present like a standard dungeon. You’ll run around rather barren sections of land as you level through items and monster fights. In contrast to the great production values of the Visual Novel segments, these dungeon portions feel cheap and generic. The graphics get the job done, and the mostly 30fps frame rate is good enough, but the presentation gives off early 3d mobile game vibes. While the chibi style is something I am personally fond of, the visuals in this section are rather ho-hum. It’s a means to an end, which isn’t truly worth complaining about, but still disappointing.

“Occasionally the camera during battle will zoom in as you’re attacking one enemy, cutting another two off the side of the screen”

Battles aren’t random in these dungeons, as you can see the monsters while in the isometric view. To initiate a battle, all you have to do is bump into an enemy when you see them. This transports you to a side view, and the battle kicks off. you’ll be transported to a side view and the battling can begin.

While it starts a little simple, I ended up liking the battle system. Early skirmishes require nothing more than mashing the attack button to swing your weapon, but things pick up soon thereafter. You’ll come to learn that certain weapon types, which can be cycled between spear, sword, and axe on the fly, work better against select monsters. This is communicated by an icon near the monster’s health bar. Once that’s established, the monsters really start fighting back, taking battles from tedious to a bit more strategic. While monsters have very basic attack patterns which can be quickly learned, these change as you level up. Adding another layer to battles is the DG bar, which slowly fills during fights. Once filled, the DG bar can be used to temporarily unleash the Demon Lord himself into the battle. He is far more powerful, as you’d imagine, and can lay waste to most enemies quite easily (minus bosses).

The battle system isn’t without its frustrations, though. The camera tries to dynamically zoom in and out depending on the situation, but it never seems to work quite right. Occasionally, the camera will zoom in as you’re attacking one enemy, which cuts off two more enemies on the sides of the screen. Once you defeat that one enemy, the camera then zooms out to show the others. This camera work sometimes leaves you open to projectile attacks, as they can fly towards you with no warning. Even worse, the enemies themselves can sneak on screen without any hint of them advancing. In particular, raging bull-type monsters called Chilly Badhogs charge at you from off-screen, and there’s no period of invulnerability once you’re hit. Poor camera work results in Chilly Badhogs that can repeatedly floor you, as you have no chance to react, and then you die. 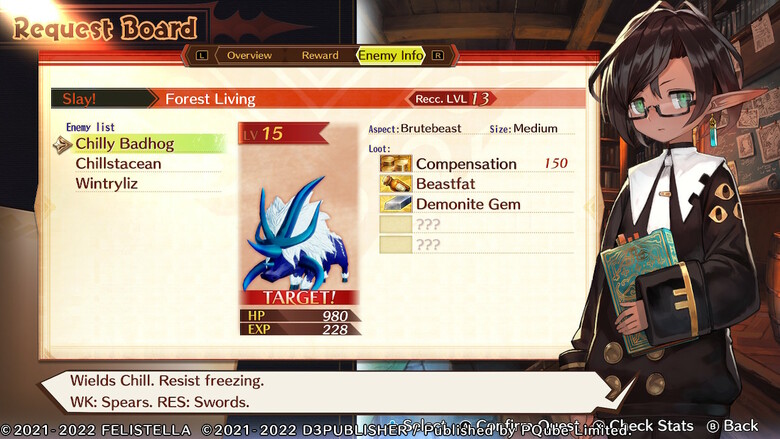 Notice that Reward tab? Within it for this mission is a unique "Ever lasting hatred of Chilly Badhog IRL" perk.

There’s another poor design choice in battle that makes controlling your character a bit more clunky than it should be. Each landed hit is accompanied by a dramatic pause, but due to the frequency of hits against multiple opponents, these momentary stops end up functioning more like slowdown. During this deceleration, button inputs take much longer to register than they should do, if they even register at all. Not surprisingly, having this kind of issue pop up during the heat of battle can lead to more unwarranted deaths.

Thankfully, the way death is handled in Maglam Lord is a real positive. When you die, you can either reload your most recent save (there’s no auto-save here… be mindful of this!) or retry, which dumps you back to the moment just before the monster encounter that killed you. This is extremely quick, as there aren’t any load times, so you can keep the momentum going. This is a setup that really respects the player’s time, and as a busy dad myself, I definitely appreciate it!

Once a battle is finished, copious amounts of loot is dropped. Loot can be used to create new, more powerful weapons, or spent on stat boosts for your current armory. As you level up, you can unlock special moves for each character, and another round of stat bonuses. Once you get into the rhythm of the battle system, it turns into one of the most satisfying parts of the game. This makes the somewhat bland dungeon crawling sting that much more. Had they included a mini map for the exploration segments, some of my pain might have been alleviated. As it stands, I had to constantly access the map screen in order to effectively comb through the environments, which became somewhat of a slog.

The good news is that Maglam Lord’s gameplay loop, while basic, is still quite addictive. Some request types are great for XP and item farming, and I happily plowed through these a few times to grind out level increases. From here, I’d make progress in the overall story, and then dip back into the Visual Novel sections. You’ll find little interstitials with other town residents in the Visual Novel portions, which help to greatly flesh out the game world. My favorite character in the game is a young girl named Lyrica, whose well-written and unexpected interactions with Killizerk only pop up as side content in town.

If you were to take Maglam Lord’s supportive gameplay elements on their own, things would come off a bit underdeveloped. By using those elements as a backup to the core Visual Novel experience, Maglam Lord ensures they don’t overstay their welcome, and instead provide the player with tangible progression and purpose. The exploration component of Maglam Lord is easily the weakest, but since they’re tied in with the battle sequences, things are much more palatable. All things considered, the superb writing and art direction on display in Maglam Lord’s Visual Novel trappings make the entire experience an easy recommendation for fans of the genre.