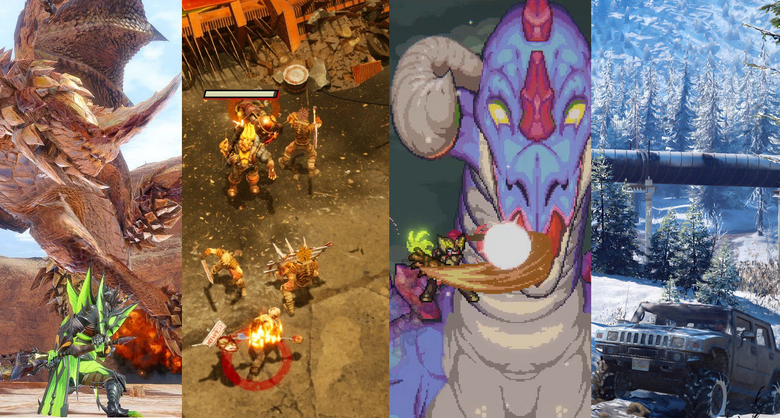 Today is yet another big day for game updates on the Switch. Monster Hunter Rise: Sunbreak, Deadcraft, Smelter, and SnowRunner have all received updates, and we’ve got the patch notes for each below.

We know that strategy isn’t everyone’s cup of tea so we decided to add something with a little more of a kick. The new Action mode will let you dive right in to the platforming/action portions of Smelter via while leaving the questing and expanding of Smelter’s magnificent empire to his faithful Zirm forces. The map might look similar to the original at first glance, but don’t be fooled! Smelter can now hop between stages in an instant, clear them and open up more paths to new places! In addition to this, some of the dialogs have also received some love in order to reflect the new flow of this mode.

Who doesn’t love pummeling big, bad guys in rapid succession? This new Boss Rush mode lets you do just that! All the boss battles in the game have been pulled together so that Eve and Smelter can lay the smackdown on the Guardians and the Watch of the Rumbly Lands one right after another. Additionally, with this new mode, you can test your skills with the different elemental abilities but there’s a catch — the higher in difficulty you go, the more your abilities are limited so good luck (you might need it)! In order to unlock this mode, you’ll need to make it towards the end of the game but we’ll let you find out where for yourselves!

Classic Mode is the original version of the game in all of its former glory! Additionally, Action and Classic modes are saved on separate slots* so don’t worry about which one you choose. You can always start a new game in another mode if your heart so desires. *Auto-save functionality may override when switching between modes, so please make sure to manually save when changing between the two.