I don't need a game to know I'm not 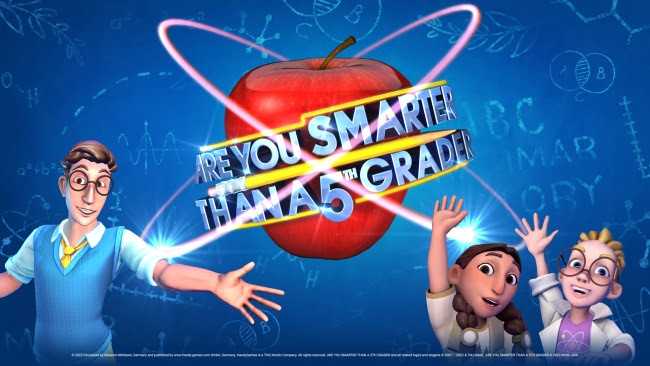 THQ Nordic and MGM kicked off digital pre-orders for Are You Smarter Than A 5th Grader? today, while also confirming that the game will launch on August 23rd, 2022. The game is normally priced at $30, but hopping in on the pre-order will get you 10% off.

Are You Smarter Than A 5th Grader? is an engaging and humorous quiz game based on the popular quiz show TV franchise. Multiple-choice questions, true-or-false challenges, and minigames will test your proficiency in more than 24 different subjects. Faced with a tough question, you can always rely on your classmates for help! More than 6,800 questions on topics like animal sciences, vocabulary, math, and more are delivered by a diverse, fully voiced, and animated cast of characters. Beat each challenge alone or together with family and friends in exciting couch co-op multiplayer gameplay to prove that you are, in fact, smarter than a 5th Grader!

The original Are You Smarter Than A 5th Grader? game show ran for five successful seasons on FOX Primetime and averaged 20 million viewers a week in its first season. That success was accompanied by 300 original episodes for syndication. The format remains incredibly relevant today, having been produced in more than 70 countries around the world, and enjoying success across multiple platforms including a YouTube channel and Podcast.