Metallic Child getting 'Sakuna: Of Rice and Ruin' themed DLC on March 31st 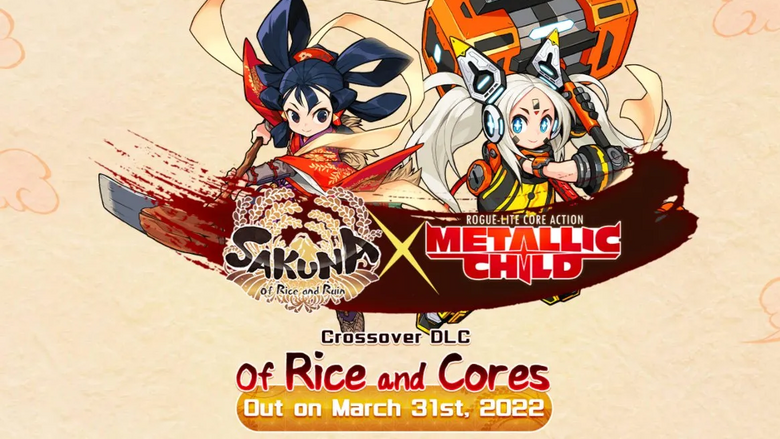 TOKYO – March 17, 2022 – Publisher CREST INC announced today that its popular sci-fi rogue-lite Metallic Child will release its first two DLCs “Of Rice and Cores” and “Kokorowa” on March 31th. The DLC will feature a cross-over with Edelweiss’ Japanese-style action game Sakuna: Of Rice and Ruin and will feature exclusive weapons, character and stage customizations bringing the world of Sakuna into the battlefield of Metallic Child. Both DLCs will be available for purchase on both Nintendo Switch and PC via Steam for $7.99.

“Of Rice and Cores” DLC brings the world of Sakuna: Of Rice and Ruin to Metallic Child by introducing the “Raiment of Harvest and Valor” customization which allows players to play as protagonist Sakuna equipped with an exclusive weapon, “Combat Hoe.” This weapon features a new system in which the skill attack changes depending on the skill gauge level. When the “Raiment of Harvest and Valor” is equipped, Mini-cores left by defeated robots and HP cans turn into onigiri (rice-balls). The “Kokorowa” DLC brings Sakuna’s friend, Kokorowa with her own exclusive weapon with the skill gauge system.

More information about the new DLC and other updates can be found here!

In addition to this, a major update will release bringing new customizations, weapons, a new stage, and combat settings including:

■The New Combat Setting: “Advanced” The Advanced combat setting will be available after clearing the main story. In the Basic setting, new enemies only arrive after all the current ones have been defeated. In the Advanced setting, reinforcements will arrive while there are enemies still left, leaving no time for players to catch their breath during battle. In return, skill attacks will increase in effectiveness.

■A New Challenge: The Bottomless Labs There was more to Terminal Creed to discover. In the Bottomless Labs, players will battle against an endless onrush of enemies to gain points until Rona becomes immobilized.

■New Customizations as Rewards When all stages are cleared in the Advanced setting, the Custom, OVERTURN, will become available. With OVERTURN equipped, the exclusive weapon, Gatling Fists, will be equipped at the start of the stage. When players obtain 2000 points or more in the Bottomless Labs, the Custom, SMASHING THE BATTLE, will become available. With SMASHING THE BATTLE equipped, an