Just a girl and her fox 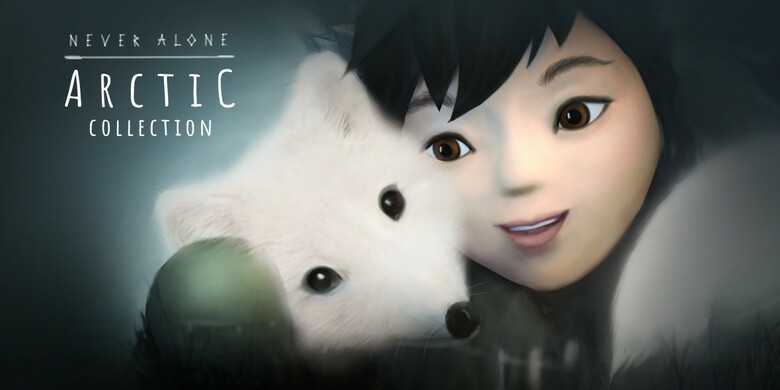 You start the game as a young girl named Nuna whose village is being threatened by a never-ending blizzard. Setting off to discover the source, you’ll be joined by an Arctic Fox who becomes your AI, or real-life co-op companion. Between the two characters, you can jump, climb and solve physics-based environmental puzzles to progress, switching between the adventurers with a press of the X button in solo play. 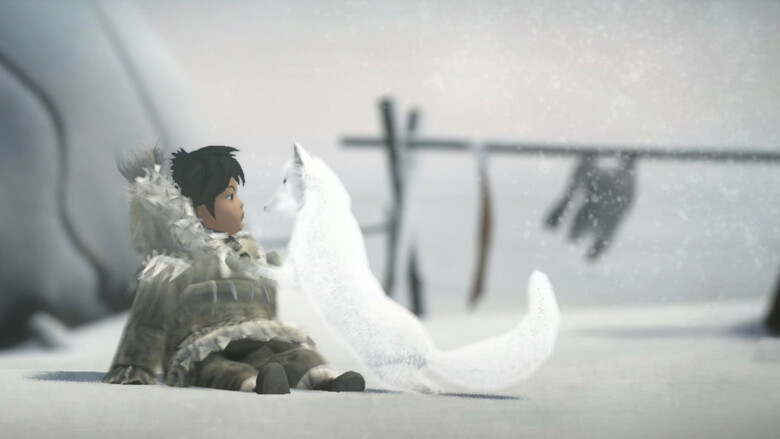 These two are genuinely sweet together, and carry the game well

Short side-stories are peppered throughout the adventure and are taken directly from indigenous Alaskan culture. Like many stories that are passed down through the generations, these are all meant to entertain, while imparting life lessons and wisdom collected through the ages. These tales are told through a mix of gameplay and atmospheric, beautifully-drawn cut-scenes featuring indigenous narration with subtitles.

Never Alone leverages the power of videogames to share, celebrate and extend culture. 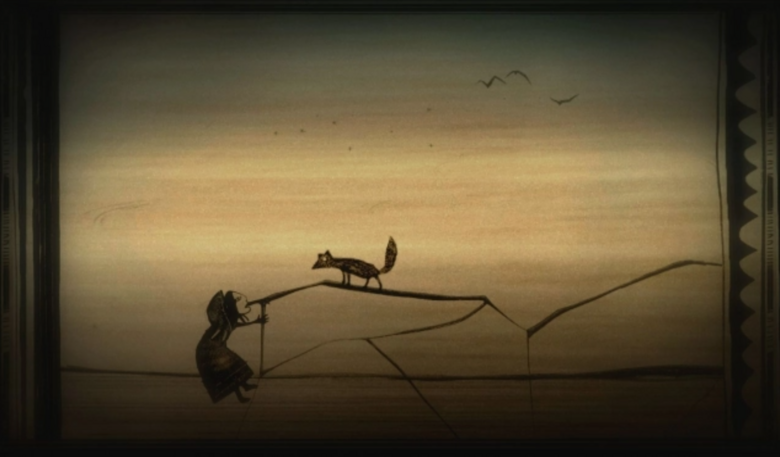 The cut scenes were created in collaboration with native Alaskan artists, and look phenomenal

The in-game art style is equally charming, with cartoony, chunky characters who express and animate meaningfully. This goes well with character movement that reacts realistically to the never-ending storm, with even Nuna’s hood blowing up over her head when the wind picks up from behind. The muted, powdery environment is a constant throughout; blanketed in snowfall for the majority of the game to create an immersive experience, especially when the blizzard temporarily ceases and you realize just how much of your vision was deliberately blurred out. The soundscape deserves special attention, too, as the sounds of the wind, changing blizzard conditions, and crunch of snow beneath Nuna’s feet all combine with environmental effects to provide a feeling of presence within the landscape. 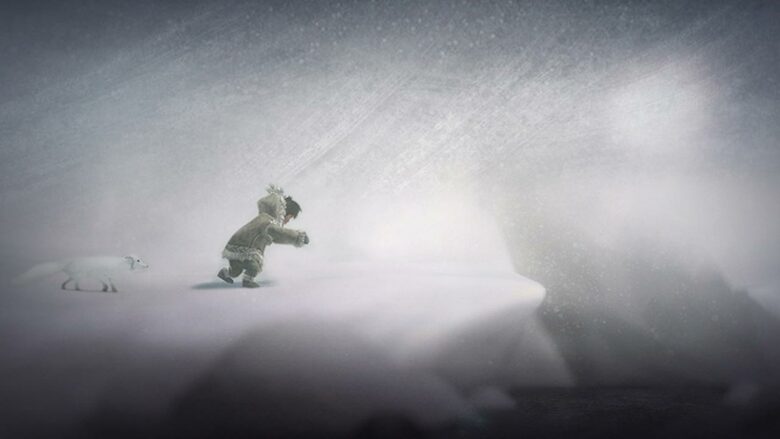 A tremendous atmosphere is present from start to finish

The combination of these effects is also used for gameplay, with intermittent bursts of wind knocking your character over unless you actively brace for the gusts by holding the B button. At first it feels like you’re not given any warning, but after a few tumbles, and with the combination of subtle audio and visual cues, you’re able to predict when the wind will blow through again. Conversely, some jumps require additional distance, requiring you to time your jump in order to get pushed further by the wind. This feels like you are learning to read the environment alongside Nuna, and had me excited for what other immersive gameplay features would come along. Unfortunately, this potential is never quite realized, as gameplay sticks to simple platforming and light puzzle elements throughout.

To aid in puzzles found partway through the game, you’ll find a throwing Bola. You pull back the right stick to aim it, and then throw by pushing the right stick to the opposite angle (rather than just letting go). Frustratingly, this control mechanic results in unavoidable changes to your aim, making the Bola rather difficult to use. Things aren’t too bad during the gentle puzzle platforming segments, but the game has some chase sequences as well, and when those portions require the use of the Bola, the culmination of everything can lead to a number of seemingly avoidable deaths. 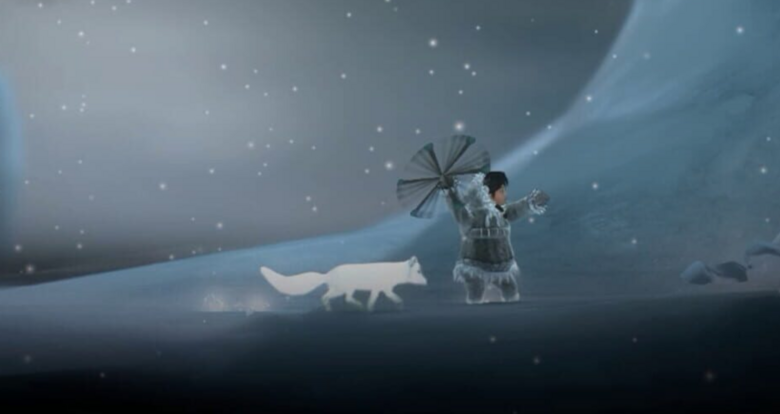 The Bola is a misstep

Those chase sequences also host the worst of the game’s frame rate issues, as the slowdown brings with it unresponsive button presses that may not register at all. I say “the worst” because the game does struggle to hit its frame rate target in other areas as well, and with its platforming mechanics, this can cause considerable irritation. Even more bothersome is the game’s checkpoints, which while frequent and quick to reload, are often in positions that lead to instant death upon respawn. This might be considered a glitch, but it’s certainly not the only technical bug present. During my time with Never Alone, the game crashed on me once, the character swapping mechanic failed to function twice (forcing a checkpoint restart), my fox disappeared or got stuck, and on multiple occasions, physics-based glitches resulted in death.

Gameplay design has some unfortunate choices too, with platforms in the game reacting to your fox in interesting and imaginative ways, but with rules of behavior that aren’t consistent. The puzzles can sometimes be unsatisfactorily laid out, with some using context clues to create a clever experience, and others defying all logic, making for vexing situations. In particular, Never Alone will sometimes force you to move into specific areas of a level to reveal hidden platforms. These can be the only way forward in some settings, and not having any context clues for them causes a problem. To make matters worse, these platforms have poor edge detection, meaning that when you go to grab onto them, sometimes you’ll connect, and other times you won’t. You’ll often fall off a ledge that looks to be just a few steps ahead, and other times you won’t be able to drop down from a spot when everything in the scene indicates you can.

Never Alone is made with such heart and authenticity that, as a creative attempt to expand the audience for its stories, it feels mean-spirited to criticize it for video game aspects. That said, these video game aspects get in the way of the original creative purpose, letting the gamer, developer, and stories themselves, down.

There’s a sequel on the way, and I’m still excited for that due to the main concept of the game – indigenous stories told through puzzle platforming gameplay. Like the stories they’re looking to portray, Upper One Games have cut their teeth with Never Alone, and have no-doubt learned lessons from the experience. Hopefully, their newfound wisdom and adeptness allow for a sequel that better connects gameplay with the proven creativity and genuine nature of the first outing.

Beneath a flurry of control issues, bugs, performance stutters, and gameplay design faux pas, beats the heart of a charming and imaginative 2d puzzle-platformer dripping with authenticity and atmosphere. All this is packed into a short 3-hour play time, but somehow, Never Alone: Arctic Collection still manages to overstay its welcome.