REVIEW: Spidersaurs is a test of patience, not skill 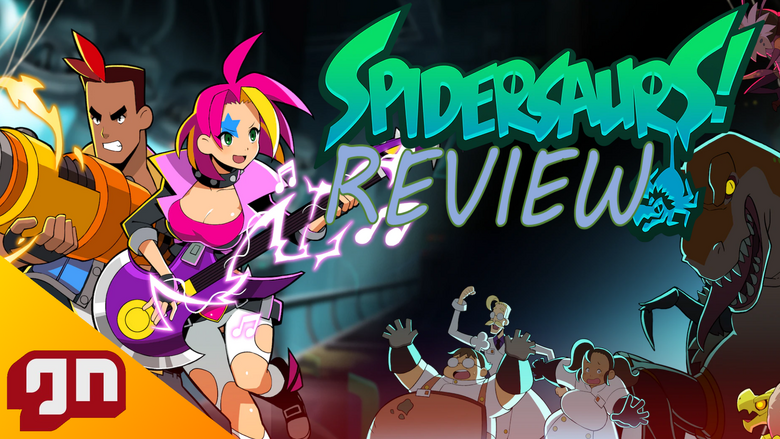 Run n’ guns aren’t a dying genre, but they certainly don’t appeal to the widest crowd nowadays. Enter Wayforward with their latest attempt at the genre, Spidersaurs. Originally released in 2019 for Apple Arcade/iOS, this stylish take on 90’s run n’ guns tries its best to emulate feelings of old, but it unfortunately brought some of the baggage with it.

While overall a decent experience, Spirdersaurs did very little to impress. Honestly, I believe this is a fault of the game’s level design. I was worried my feelings were due to my unfamiliarity with the genre as a whole, so I enlisted the help of a friend to play through the game as well. This friend is not only somewhat of an expert in run n’ guns, but challenging platformers from Contra to Mega Man and beyond. I wanted to measure my own experience and thoughts on Spidersaurs with theirs to see if perhaps I was missing something. 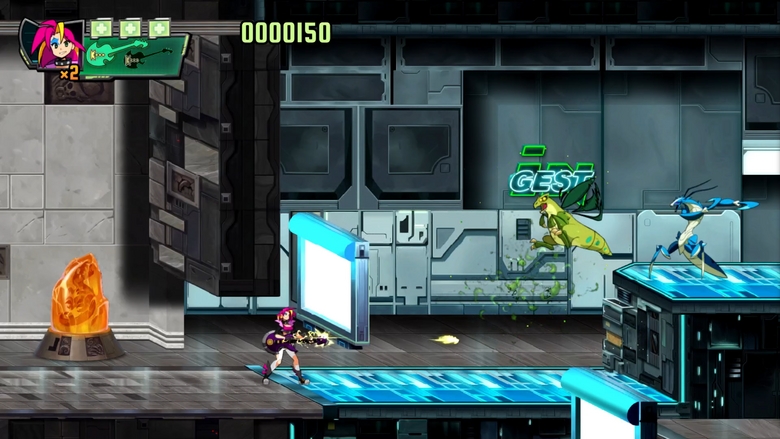 Before I really get into the topic at hand, I want to clarify one thing: I couldn’t actually beat Spidersaurs on the ‘normal’ difficulty option. Despite the extremely short length of the game, some of the design choices and frustrating moments proved too much for me to overcome. That said, I did finish the game on ‘easy,’ and I feel the time I put in was more than enough to form an opinion worth sharing.

Spidersaurs involves a lot of running (ha) and gunning (haha) through various platforming challenges. There’s a total of six levels (seven if you include a lead-up to the final boss), each with at least one miniboss and one end boss. After beating each end boss, you get a new ability. Those abilities range from wall-climbing to double jumps. Frustratingly, because of the game’s linear nature, there’s no incentive to use these abilities anywhere other than the subsequent levels. Revisiting levels lets you use the new abilities, but there’s no secrets to uncover or strategies to be found. There are brief dialogue sequences between levels, but there’s not much in the way of story. That said, a lack of detailed story is kind of a given for the genre but at the very least the story, while short, was pretty funny. All in all, Spidersaurs offers an extremely simple premise, but in execution, it’s quite rough around the edges. 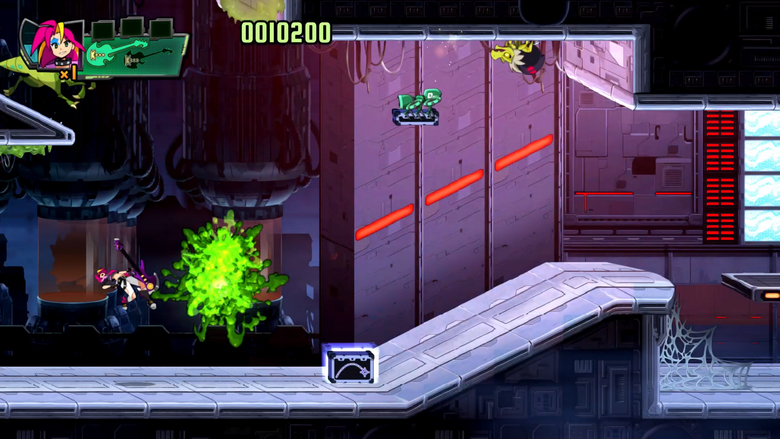 The game has three difficulty options – Well Done (Easy), Medium (Normal), and Rare (Hard). I chose Medium since I always try to pick whatever a game deems as “middle of the road,” as I believe that will offer a challenging, yet fair experience. Surprisingly, I suffered many off-screen deaths due to despawned enemy sprites with active hitboxes, elevators careening down on me without warning, or screen-scrolling sections where the bottom of the screen caused damage, if not instant death. After spending nearly three real-life hours on just Level 2, I was done. I no longer cared about the double jump ability I unlocked, although it would have made the level a thousand times more manageable. By this point I was simply too frustrated to care.

The aggravating level design tested my patience in ways which it has never been tested. I’ve played and beaten a few notoriously difficult games, and I am always willing to admit when I’m at fault versus when the game design is at fault. Unfortunately, I found Spidersaurs to be rather poorly designed.

You might think the difficulty could be bumped down to alleviate the issue, but it actually causes another. In a very old-school decision, Spidersaurs locks you out of the final boss and true ending if you choose the ‘Well Done’ difficulty. Locking out things like Achievements would have been more tolerable, although I’m not one-hundred percent on board with that either. Removing a player’s ability to see the full standard story because they may have a difficult time with the game seems pretty unfair. Not every game needs to be “dumbed down,” but if you’re going to offer options, don’t block access to the core experience. 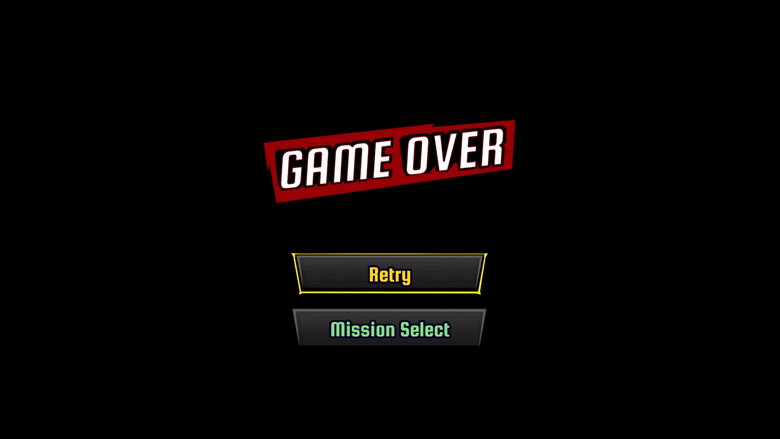 Be prepared to see this a lot

I don’t want it to sound like my time with Spidersaurs was absolutely miserable; frustrating for sure, but not entirely bad. The visuals are quite nice, despite some blurriness that was a tad distracting at worst. The levels themselves aren’t the most vibrant, but the enemies and characters pop out really nicely and it’s appealing. The visual style as a whole, though incredibly unique, still screams “Wayforward.” Taking a quick look at any of the recent Shantae games or the upcoming Advance Wars 1+2 ReBoot Camp and you’ll see exactly what I mean.

Of course, I have to mention the absolutely banging soundtrack by Harumi Fujita, the composer most known for her work on Todd McFarlane’s Spawn: The Video Game as well as Mega Man 3. The compositions in Spidersaurs elicit a high-energy vibe that you could only get from the extreme era that was the 1990’s. I want to reemphasize that even despite my frustrations with the core gameplay, I actually listened to the soundtrack quite a bit outside of the home. During my day job I have various soundtracks playing in my earbuds and Spidersaurs has a few tracks that made it into my playlist. I really can’t give enough credit to how great it sounds.

That also brings to mind the voiceover. While it won’t win any awards for originality in the writing department, I got some chuckles from a few of the jokes the game threw out, and the voiceover helped deliver said chuckles. 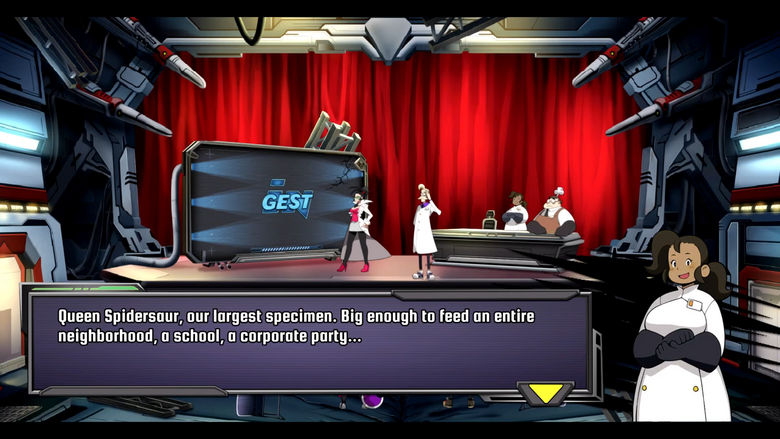 Feed an entire neighborhood... to it?

Earlier I mentioned a friend who helped me with this, and they played through the game on their own time. Again, they have a much higher skill set than me when it comes to challenging 2D games. According to them, Spidersaurs looked to emulate Contra in multiple ways. The jump physics, unlockable moves, weapon pickups, and more all hearken back to Konami’s classic. That said, my friend found the level length far too long, and that’s even with a checkpoint in the middle. Making things worse is the puny damage your base weapon does, which can lead to some intense struggles without a power-up. Lastly, my friend found the last few upgrades to be clumsily implemented, which is only made worse by level design that doesn’t do a good enough job in teaching the player how to use their new abilities.

Despite my complaints, I agree with my friend in one specific area. We both recommend waiting for a price drop if you’re interested in checking out Spidersaurs. There’s plenty of other run n’ gun options on Switch, and some of them even include online co-op. Still, if you’re interested in giving this game a go, you can expect some fun dialogue and a great soundtrack, which will hopefully push you through the overly-punishing level design and some discouraging game design choices.