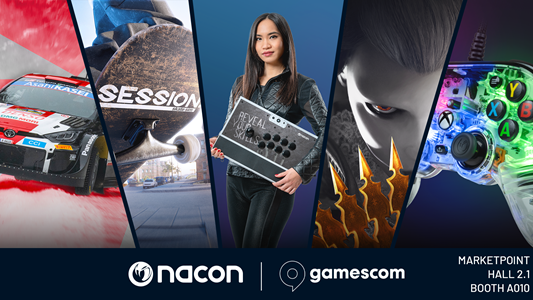 Nacon has announced that they’re going to be a part of Gamescom 2022 and they’re bringing quite a lineup of games with them. Thankfully, a decent amount of those titles are also Switch-bound.

You can check out Nacon’s entire lineup for Gamescom 2022 below. We’ve bolded the games that will appear on Switch.

WRC Generations (KT Racing): Planned for release on 13 October 2022 on PlayStation®4, PlayStation®5, Xbox One, Xbox Series, and at a later date on PC and Nintendo Switch™, WRC Generations celebrates the arrival of a new generation of hybrid cars and the new racing thrills they bring, as well as a brand-new Leagues mode that matches players against others of a similar level. WRC Generations is the most advanced title in the series and has the largest selection of cars, rallies and special stages ever included in a video game.

Session: Skate Sim (creā-ture): With camera in hand, players skate the best spots in iconic skateboarding locations. Designed to be as challenging as real-life skating, Session: Skate Sim allows players to feel authentic sensations through the controller thanks to innovative gameplay designed by skaters for skaters. Session: Skate Sim is already available in Early Access and will release on 22 September 2022 on Xbox One, Xbox Series XǀS, PlayStation®4, PlayStation®5 and PC (Steam, Epic Games Store).

War Hospital (Brave Lamb): This survival, management and strategy game puts players in charge of a field hospital during the First World War. With difficult moral decisions, wise management of resources and a story with choices that matter, players will need to act with a cool head to make the best decisions in the worst conditions. War Hospital is planned for release in 2023 on PlayStation®5, Xbox Series XǀS and PC.

Blood Bowl 3 (Cyanide Studio): Based on the famous board game from the Warhammer franchise, Blood Bowl 3 serves up a tasty mix of strategy, blood and offbeat humor. In this turn-based strategy game, players must play to the strengths of their team and come up with foolproof strategies to score touchdowns by any means, no matter how violent. Blood Bowl 3 releases in 2022 on PlayStation®5, PlayStation®4, Xbox Series XǀS, Xbox One, PC and at a later date on Nintendo Switch™.

Ad Infinitum (Hekate): In a surreal nightmare, players step into the boots of a German soldier in the First World War. Trapped in the horrors of the trenches or in the oppressive atmosphere of their family home, they must find reality to escape the strange creatures pursuing them. Ad Infinitum releases on 20 April 2023 on PlayStation®5, Xbox Series XǀS and PC.

Steelrising (Spiders): Aegis, Marie-Antoinette’s automaton bodyguard, must free Paris from the mad king Louis XVI’s mechanical army in an alternate history of the French Revolution. With a strong emphasis on combat, the new action RPG from Spiders offers players the chance to engage in intense battles of skill. Steelrising is planned for release on 8 September on PC, PlayStation®5 and Xbox Series XǀS. Access to a closed beta phase will be available from 25 August 2022 to those who have preordered the game.

Train Life: A Railway Simulator (Simteract): This railway simulator puts players at the controls of various locomotives as well as their own company. As train driver, they must negotiate the most advantageous contracts and drive passengers and goods through 10 countries in Europe while managing their business to make it grow. Simteract’s game is planned for release on 25 August 2022 on PC, and on 22 September on PlayStation®5, PlayStation®4, Xbox Series XǀS and Xbox One. It will release on Nintendo Switch™ at a later date.