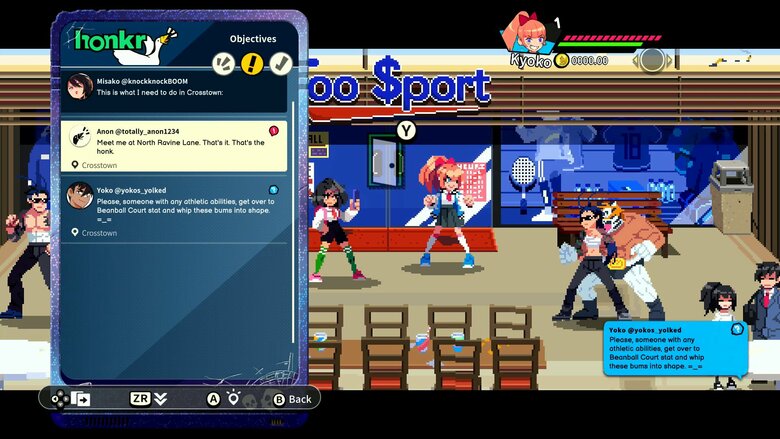 Last we heard, River City Girls 2 is slated to hit Switch sometime in Summer 2022. While we wait for a specific release date, WayForward is sharing some new tidbits about the game via Twitter. Today’s update gives us a look at a revamped user interface.

The menu UI in River City Girls 2 has been redesigned to look and function more like a real smartphone. You’ll be able to access a series of apps, including Honkr (for sidequest info), Snapr (for viewing unlocked goodies), and an enhanced GPS/maps app to keep track of where you are and need to be.

Picking up where the first RCG left off, River City Girls 2 throws hot-blooded high-schoolers Misako, Kyoko, Kunio, and Riki — along with newcomers Marian and Provie — into the fight of their lives when an old foe returns to wreak havoc. But the girls (and guys) aren’t just giving up; they’re fighting back with new stat-altering accessories, new items, new weapons, and additional moves (such as Kyoko’s Cartwheel Kick and Misako’s Lightning Rider), along with brand-new abilities like guard-crush attacks and lift-off combos. Recruited foes are back to assist in battle — this time you can hold two at once! — plus you can now enlist the help of hired henchmen who pack even more of a punch!