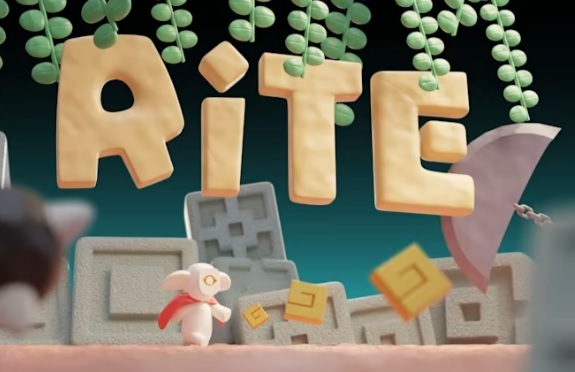 While there are countless complex games available today, the industry got its start with some very simple ideas. Single-screen games where you avoided hazards by moving around, be it by walking or jumping. Some may scoff at the earlier efforts of the game industry, but those releases paved the way for where we are now. The game industry couldn’t run if it didn’t first learn to crawl!

Fast-forward to 2022 and you have a game industry that is chock-full of incredibly sophisticated experiences. Take Xenoblade Chronicles 3, for example. It’s a title packed to the brim with sidequests, sweeping orchestral music, hours’ worth of dialog, and a deeply layered and balanced battle system. There’s so many moving parts going on in the game that it’s amazing to see how it all comes together.

A game like Xenoblade Chronicles 3 has every right to exist and I’m certainly glad it does! The thing is, a release with that level of intricacy doesn’t mean simple games shouldn’t exist. An industry is only good as the variety it provides, and there should be games that run the gamut. Xenoblade Chronicles 3 exists on one end of the spectrum, and waaaaaay on the other end is a title like RITE. It’s a game that hearkens back to a simpler time, yet still provides just as much fun as the big boys.

RITE is about as straightforward as you can get. You play as a tiny character who runs around a single-screen level to get to an exit. The only abilities you have at your disposal are a standard jump and a wall jump. You’ll use these skills to avoid deadly spikes, sawblades, and swinging axes that are blocking your path. Be careful, because a single hit from any of these obstacles means instant death. As long as you can avoid those and grab the key that opens the level’s exit, you’ll be fine. Doesn’t sound all that difficult, does it? 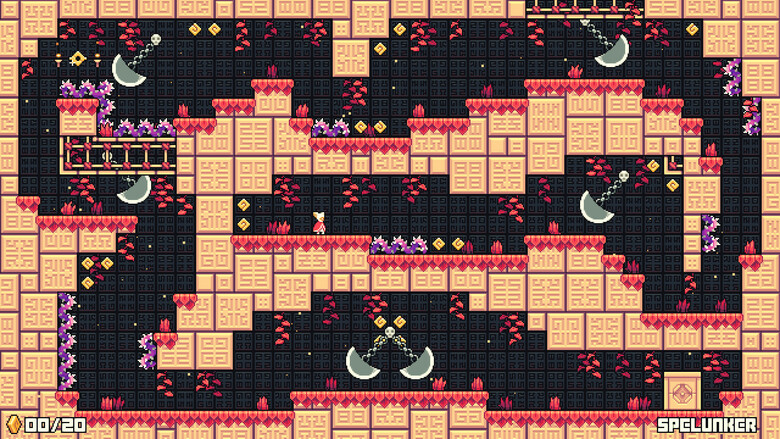 RITE does an excellent job of lulling you into a false sense of security, as the game’s initial stages are very easy to make it through. One or two jumps over obstacles, a quick key pickup, and you’re good to go. There’s no doubt you’ll blow through the first series of levels extremely quickly, and you’ll build up quite a level of confidence. You’ll start to think the game’s going to be quite a walk in the park, and then the next round of stages hits…

As you make it deeper into the game, you’ll stumble on some stages that take a handful of tries to complete. Nothing that eats up anything more than 5 minutes, but certainly a bit tougher than what you came across before. The stages continue to roll on from here, and so does your time spent on each one of them. Before you know it, every stage is gobbling up a serious amount of time. Wide-open spaces with a small group of hindrances soon become stages with precarious platforms to stand on, and an insane amount of whirling death traps blocking your way. There’s precious little time to stand still, if there is any at all! Eventually, you’ll be losing lives left and right, and racking up double-digit deaths on a single stage is par for the course.

Again, this all happens gradually. Stages early on won’t tax your abilities, but you’ll certainly feel that in the late-game. Everything you learned along the way will be put to the test, and you better have absolutely pixel-perfect placement and excellent timing if you want to survive. Here’s the key, though. While these late-game stages can certainly be an exercise in frustration, they’re also incredibly addictive. No matter how many times you lose a life, you’ll still feel the push to give things one more try.

I personally experienced death in RITE thousands of times, and that’s not an exaggeration. My death counter was nearing 2,000 towards the end of the game, and many of those expirations came from stages in the last couple of worlds. These latter levels are going to take you right to the brink of insanity, and you’ll teeter on that edge until the credits roll. That’s an incredible balancing act for any game, and somehow RITE pulls it off perfectly. You’ll sweat, you’ll scream, and you’ll stomp your feet…but you’ll never want to give up. 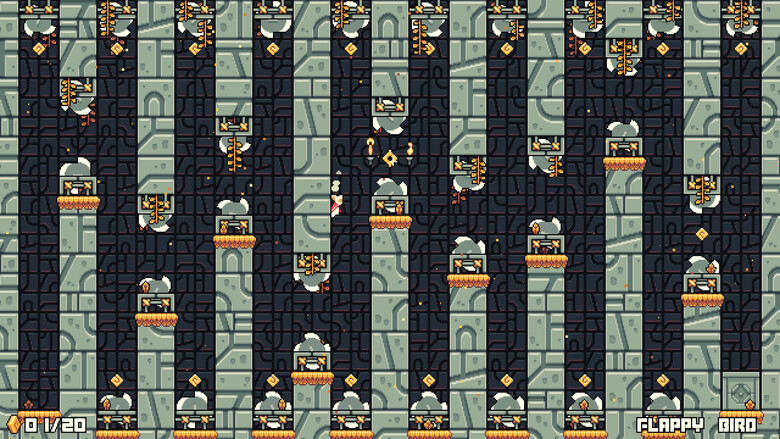 Looks pretty difficult, AM I RITE!?

Want to be an absolute masochist? Each stage has 20 coins floating around in various spots. You don’t have to collect them to finish a level, but you certainly can. As if the game isn’t difficult enough already, challenging yourself to grab these coins adds a whole new layer of torture to the experience. Of course that’s the route I decided to take from literally the first stage. Yes, picking up the coins along the way will net you a bonus very late in the game, but you’ll have to run the gauntlet yourself to find out what you get. That said, just remember that snagging these 20 coins in each stage is much like the rest of the game. Things start out very easy, and then the final hours of the game will have you begging for mercy.

Thankfully, you’ll have some lush pixel visuals to cheer you up along the way. Everything animates exceedingly well, and the whole game is a real joy to look at. Worthy of even more praise is the game’s soundtrack. RITE has an outstanding OST thanks to composer Grand Prize Big Fuzz. This musician/band has put together something really special with the game’s music, including a little motif that runs through every song. While you might get mad at the game for the countless deaths you experience, you’ll get nothing but audio bliss from the tunes.

…and that’s all there is to RITE. Please note that I don’t say that as a detractor by any means. RITE literally does one thing and does it extremely well. The controls couldn’t be more precise, and that’s really all that matters in a game like this. You’ll have no one but yourself to blame when you fall victim to a spike pit, and the only solution is to ‘get good.’ I think there’s something to be said for a game that’s a one-trick pony in today’s gaming space, especially when it is so successful in pulling off that trick time and time again. Plus, the game is just $7, and you’ll more than get your money’s worth from the adventure.

In the sea of platformers that is the Switch eShop, RITE manages to rise to the surface with greats like Celeste and N++. Hopefully this title finds an audience in this very crowded space, as it’s definitely worth your time and money.