Pilot to Twitch to watch these streams 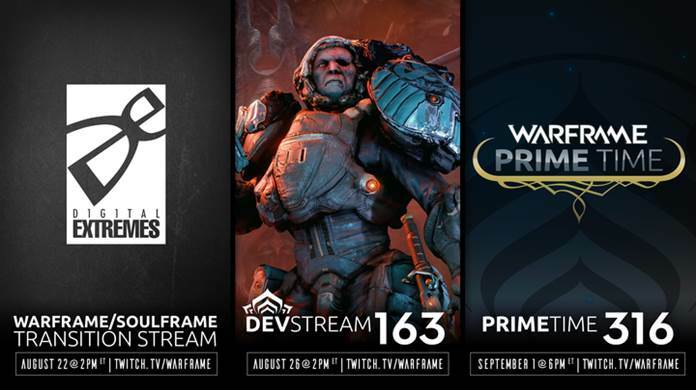 Digital Extremes has announced a series of live-streams that will take viewers behind the scenes with development leads and explore pivotal updates for Warframe. In particular, there are two different streams that will be of interest to Tennos, and they’re popping up in the next few weeks.

For Warframe’s first devstream following TennoCon 2022, Digital Extremes will offer players a first-look at the studio’s upcoming Veilbreaker update, bringing players more hands-on action with fan favorite Grineer Kahl-175 in a new post-The New War quest, along with new missions and a host of cosmetic and QOL enhancements to the Warframe experience. During the stream, attendees will also be treated to the full reveal of Warframe’s 50th playable Warframe, Styanax, launching alongside the Veilbreaker update, with the team exploring this formidable new frame’s gameplay aesthetic, design, and powerful abilities.

Revisiting the Duviri Amphitheater In-Game Relay from TennoCon 2022, Digital Extremes will offer players another opportunity to experience a slice of the Duviri Open World hands-on during Devstream 163. Available on all platforms, players only need to launch Warframe during Devstream 163 on Friday, August 26, navigate to Earth on the Star Chart, and select “Duviri Amphitheater” to join other Warframe players in-game and explore a small piece of Duviri’s Open World launching Winter 2022.

Expect major surprises along the way in addition to Platinum giveaways for select lucky viewers. This Devstream will include a discussion around The New War and will review critical narrative moments and other major expansion highlights. It airs Friday, Aug. 26th, 2022 at 2 PM ET.

After that, Warframe’s Prime Time streams are coming back. Returning with Prime Time Stream 316, Warframe’s community of players are invited to join Director of Community and Live Operations, Megan Everett, and other Warframe community leads as the team plays Warframe live for attendees while discussing and showing fan art, concepts, and other Warframe hot takes. As with every Prime Time stream, select lucky viewers will be randomly selected to win Platinum.

This Prime Time stream may include spoilers to Warframe’s narrative and storyline, including recently released expansions and updates. It airs Thursday, Sept. 1st, 2022 at 6 PM ET.