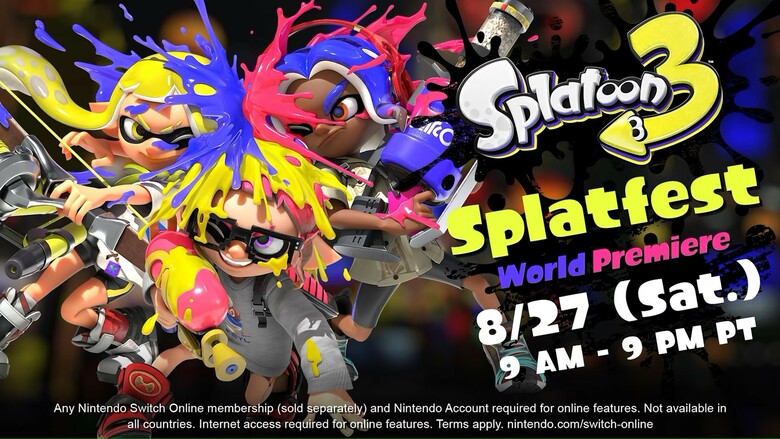 Users can now download Splatoon 3: Splatfest World Premiere demo from the Nintendo eShop (click here for the UK store) and prepare for the real show, which begins on August 27th, 2022 at 9:00 am and lasts until 9:00 pm Pacific Time.

The details of how the Splatfest will work were already explained here, the first half of Splatfest will last for 6 hours from 9:00 am to 3:00 pm PT and the second half (Tricolor Turf War) starts from 3:00 pm to 9:00 pm PT.

Ink up the Splatlands and get a tenta-lizing taste of the Splatoon™ 3 game’s newly updated Splatfest Battles* with the Splatoon 3: Splatfest World Premiere demo. New to the Splatoon series? No prob! Dip your tentacles into a tutorial to learn the basics starting August 25. Then, take a stroll around Splatsville and get ready for the Splatfest.

Oh…a quick explanation for our nautical newbies. Here’s the deets—choose a Splatfest team by answering a burning, age-old question—which is the best: Rock, Paper, Scissors? Make your move and Super Jump into Turf War battle to ink your crew to victory. Wait…there are THREE teams?! That’s right, Splatfests are a little different this time around.

The 12-hour demo starts on August 27. From 9AM-3PM PT, ink up the turf against one team at a time. Then, from 3PM-9PM PT, take on the brand-new Splatfest Tricolor Turf War Battles. This 4v2v2 format brings a new type of colorful chaos to Splatfests. Which team will get the upper hand? Team Rock, Team Paper, or Team Scissors? Let others know by posting messages and sharing your allegiance in the square.

To redeem, please enter the code into Nintendo eShop to activate your free trial. Even if you’ve activated a previous free trial, you are still eligible for this trial too!

You can only participate in the Splatfest during this time period:

Splatoon 3 launches on September 9th, 2022, for the Nintendo Switch, visit the official website for more information.