Nippon Ichi Software has just announced Disgaea 7, and it’s heading to Switch. The game has been confirmed for a Japanese launch on January 26th, 2023. There has been no mention of a localization at this time, but one will surely be announced at another date. Check out the debut trailer for Disgaea 7 above.

Surprisingly, Nippon Ichi also shared a wealth of details on Disgaea 7 to go along with the game’s reveal. You can get all sorts of information (translated by Gematsu), including special retail options, in the breakdown below. 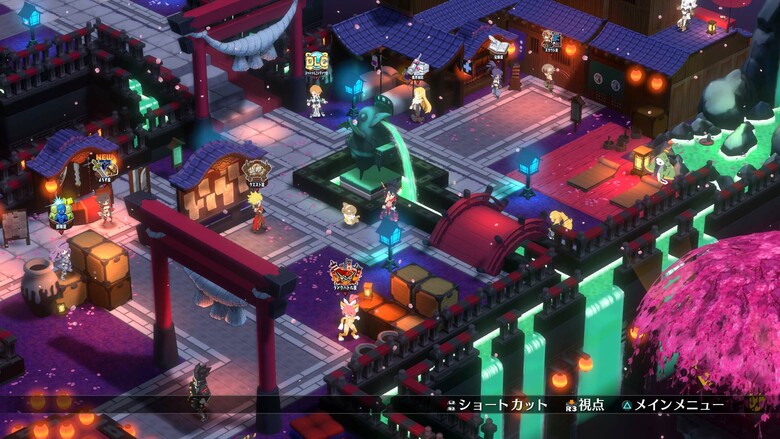 You can check out an big round-up of screens and art for Disgaea 7 here.

In Disgaea 7, the story is set in a world called the “Hinomoto Netherworld Cluster,” which is inspired by Japanese culture. Our heroes will fight through the world in order to regain their lost Bushido. Many characters designed by Takehito Harada will appear, and the Disgaea series’ signature “replayability features” and “over-the-top battle systems” have been further enhanced.

In a world made up of multiple unique Netherworlds, the inhabitants followed a code unlike other demons called “Bushido.”

Although that is a thing of the past. Hinomoto has changed since the arrival of the demon admiral Opener and his navy.

The demons of Hinomoto abide the laws Opener has laid down called “Hinomoto Destroy Hatto.”

…all who do not abide by these laws will be punished by the Harakiri.

Eventually, the once honored samurais disappeared from Hinomoto…

This is a story about a girl who admires Bushido, and a young man who hates Bushido, as they fight for what they believe in, in a world that forgot honor. 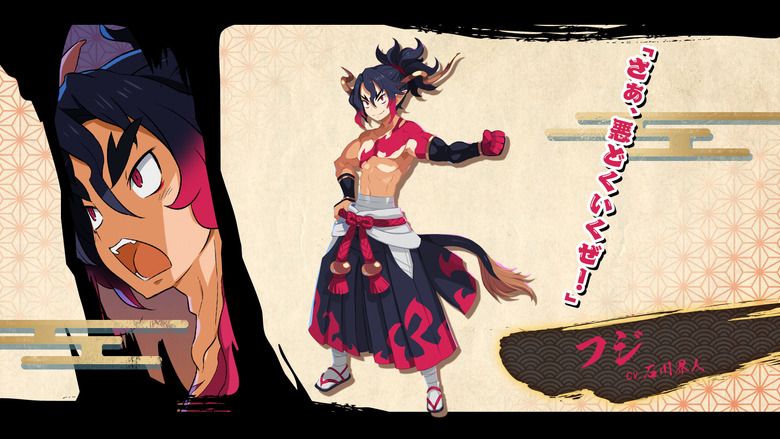 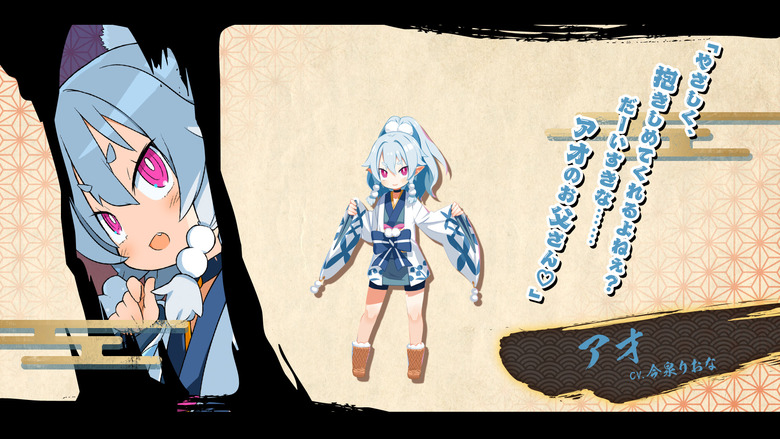 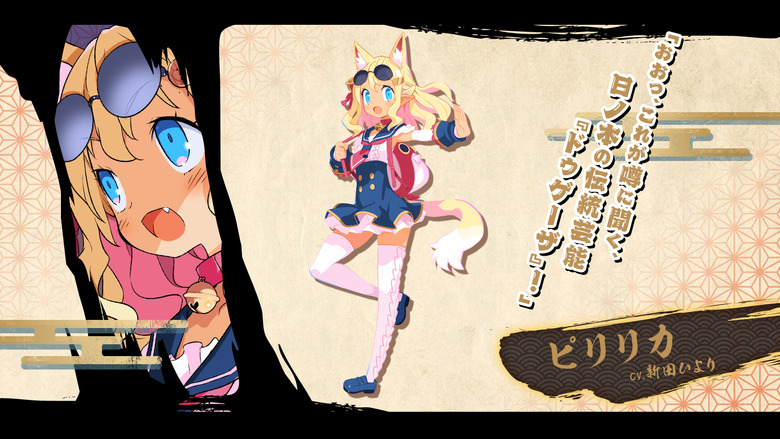 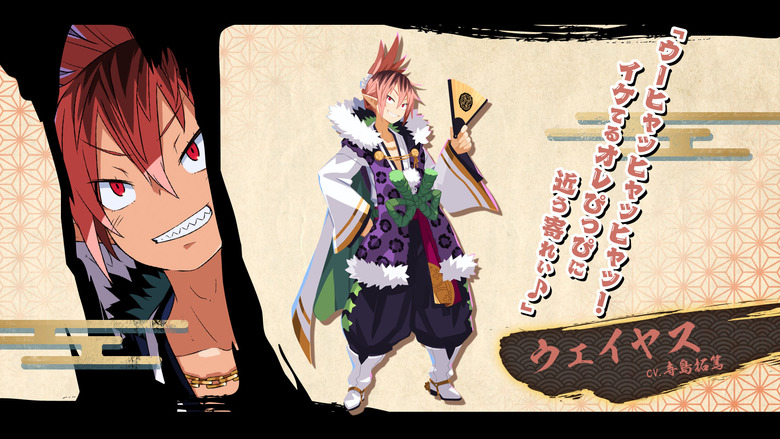 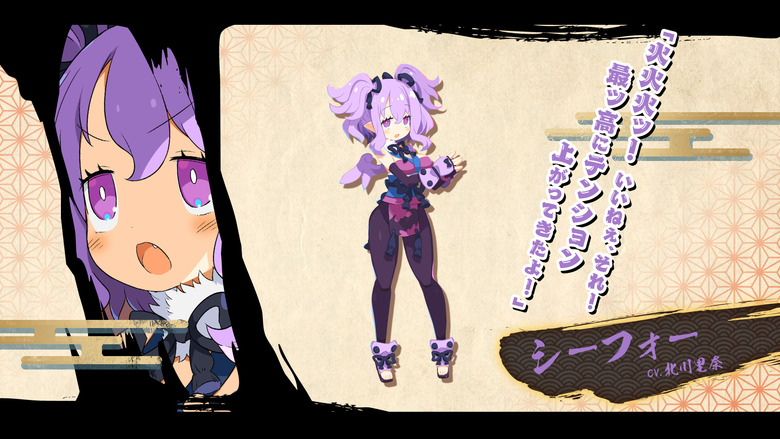 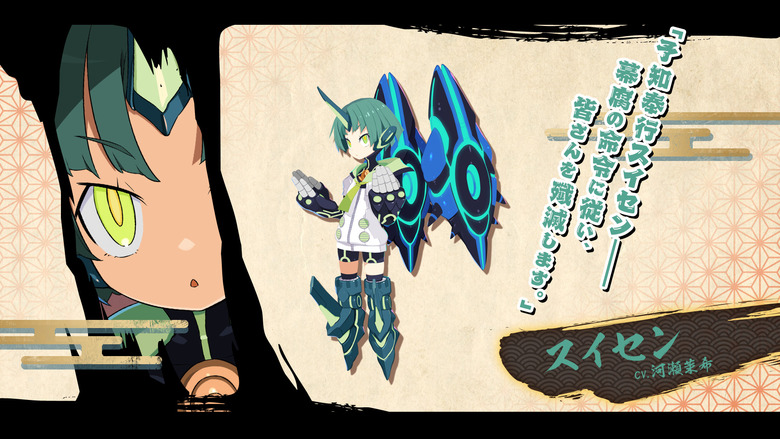 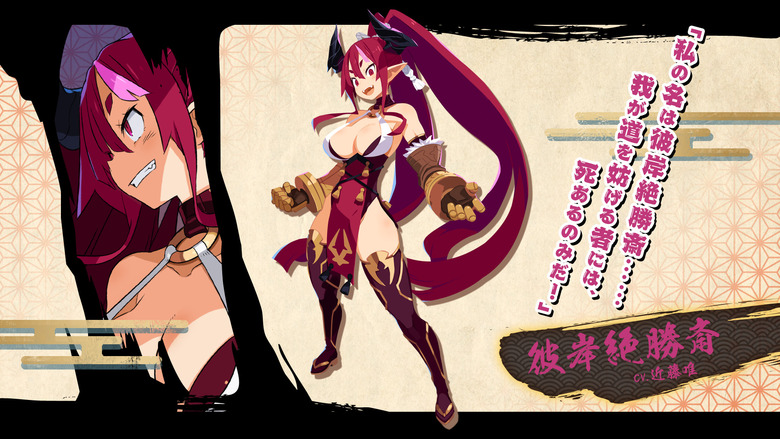 ■ Characters (in order of gallery appearance above)

A very “demon-like” demon who is “poor,” “loves money,” and is lazy. He is allergic to human-like expressions and has to cough up blood whenever he feels human emotions like love, friendship, and sympathy.

A young CEO of a company who comes from another Netherworld, brought up in a sheltered upbringing. She is a Hinomoto otaku, although most of her knowledge is gathered from different films and manga so it often differs from the reality of Hinomoto.

■ Friend or Foe? The Twisted Demons of the Hinomoto Netherworld

The Disgaea series is known for its “combat system where all things go” and “infinite character development system.” In Disgaea 7, this is further enhanced with a new rule-breaking system.

The new system “Dodeka MAX” will enlarge the characters so big that they leap out of the map! Defeat multiple enemies with a giant powerful blow, open giant treasure boxes—the “Dodeka MAXed” characters wreak havoc all around the map!

Don’t miss out on the biggest dynamic battles of the series!

In Disgaea 7, not only characters, but items can be reincarnated to make them stronger. Make swords into gum, slipper into staffs, and so on by reincarnating them again and again. You can create swords that heal you when eaten, or staffs that boost your mobility! What kind of items will you create and who will equip them? Make the ultimate badass items from countless possibilities!

■ Train Your Characters as You Wish! Enjoy the Flexibility of Character Development with “Reincarnation” and “Weapons Skills”

—By “reincarnating” a warrior into a mage, you can create a mage that can also fight in close combat.

—Even a powerless mage can use reincarnation and weapon skills to eclipse a warrior in close combat.

Unlock special skills by mastering weapons! All seven weapon types can unlock a powerful special weapon skill as you continue to use that weapon. A magical knight that uses fist to fight, a fighter that can snipe from a far, a truly flexible character development system awaits you!

■ Cool Fighters and Cute Mages, Even Rotten Zombies! The Most Amount of Generic Characters in the Series to Enable Your Ideal Party!

There will be 45 generic characters appearing in Disgaea 7, making it the most in series history. Create your own badass army amongst characters that has different appearances and abilities.

■ New Feature #3: First Time in the Series, Ranked Battles are In! Use Artificial Intelligence to Enjoy More Disgaea!

Set character moves with the artificial intelligence “Machine Edit” feature; “Auto Battles” for those who don’t have much time to train your characters; and “Ranked Battles” to compete against other players!

“Ranked Battles” become number one in the Japanese netherworld. An all new artificial intelligence player-versus-player mode in which you can battle against users around the country online! Shape your strategy by assessing the terrain and reading the movement patterns of your opponents. The strategies you have gathered through trial and error will lead your team to victory!

—Register your team and fight against players across the country. Set the best artificial intelligence according to the weekly stages.

—Highly configurable, from special moves to the order of enemy attack!

—There is also an initial artificial intelligence that is already set, so you can enjoy the feature even if you are not used to it.

—“Masoline” can be obtained by meeting certain conditions ,clearing a stage, or completing a quest.

■ The Most Content in the Series Yet and New Gameplay Elements: Please Look Forward to the Powered-Up New Disgaea!

Retaining the Disgaea flavor, Disgaea 7 has evolved with new game deepening elements. The tale of regaining Hinomoto, the hidden effects of Dodeka MAX, and unique characters that add flare to the Japan-esque world. Please stay tuned for more news to come on Disgaea 7! 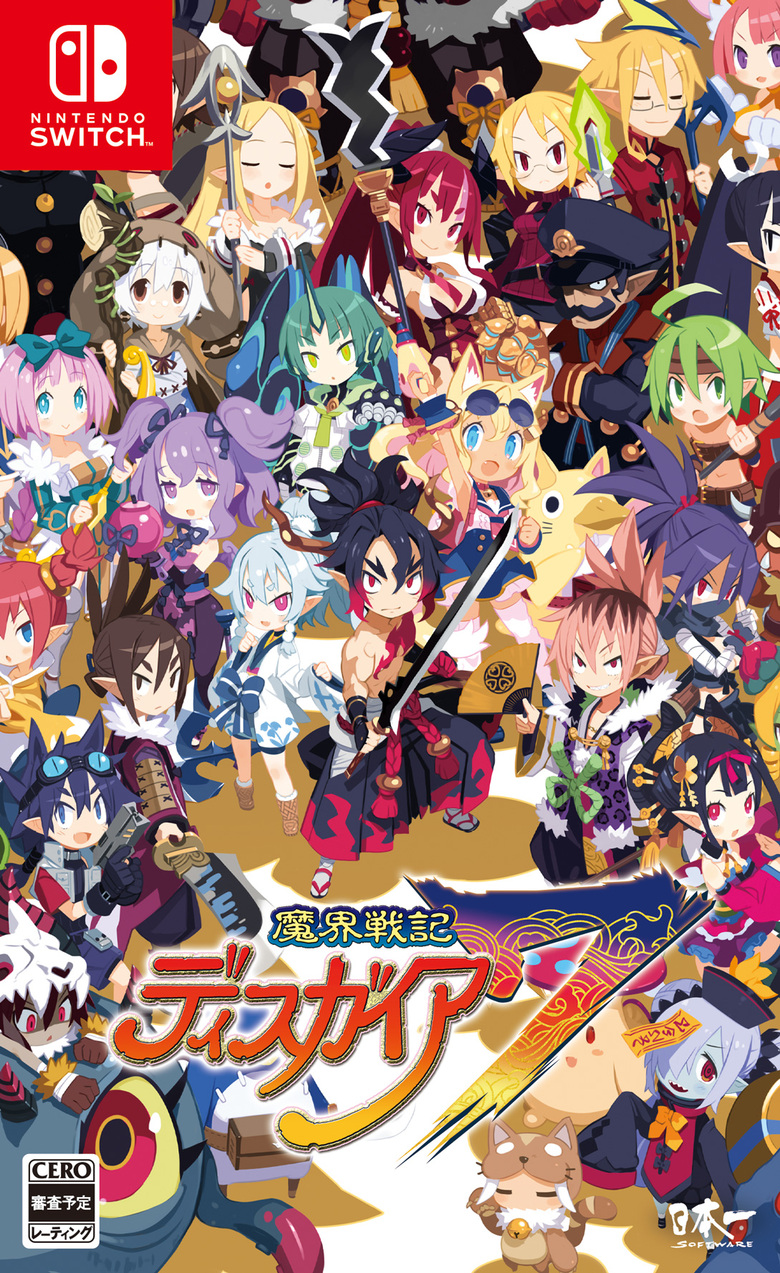 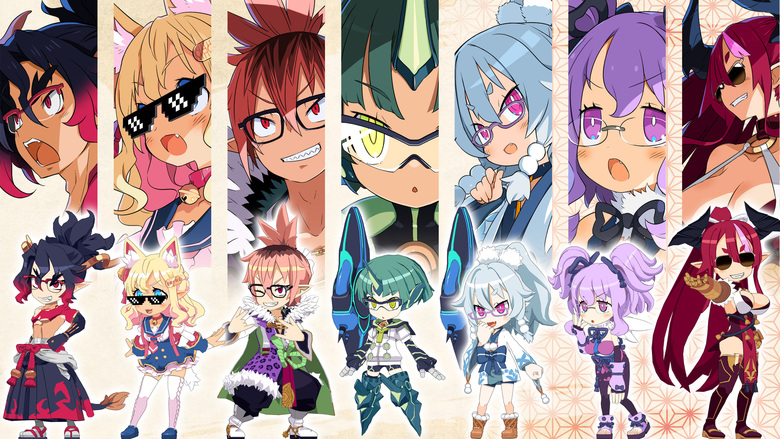 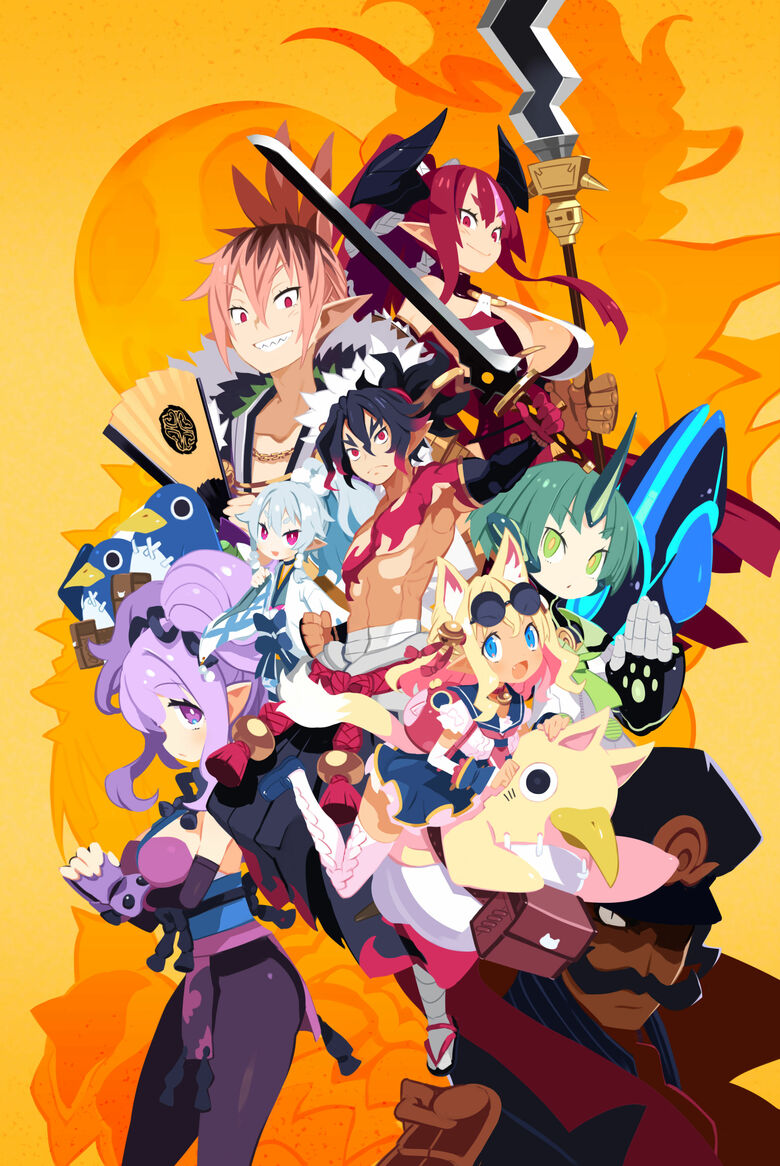 First-print copies of Disgaea 7 include the downloadable content “Glasses Costume Set,” which lets you enjoy seven characters’ outfits with glasses, sunglasses, and visors.

Priced at 3,300 yen, the Collector’s Box includes the following:

Priced at 10,978 yen, this includes the game and the Collector’s Box contents.

Priced at 15,378 yen, this includes the game, the Collector’s Box contents, and a special box with an exclusive design.

Priced at 55,000 yen, this includes the Nippon1.jp Shop Limited Edition and a folding screen (A2 size, four sides).