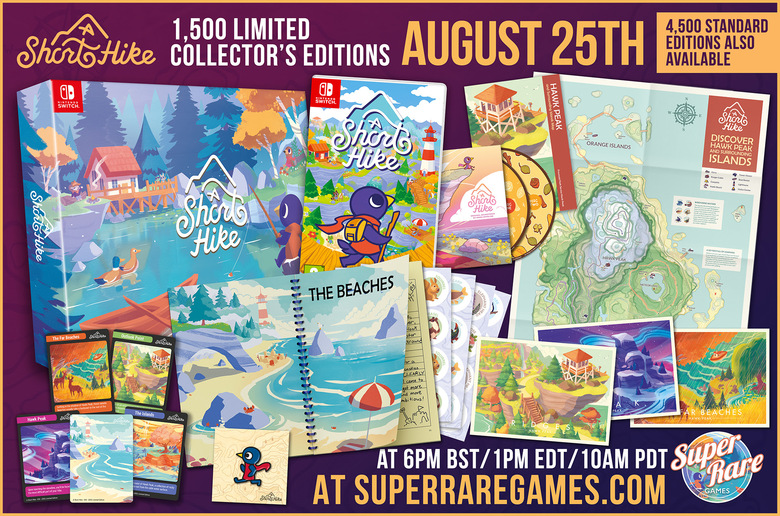 Super Rare Games previously revealed their next physical Switch release, and it’s a big one! The multi-award winning A Short Hike is getting a boxed release, and it seems people are extra excited to pick this one up.

Super Rare has taken to Twitter to mention that the reception to this announcement has been stellar, and it’s clear there’s more interest than the team expected. That’s why they’re doing something they’ve never done before. For the first time ever in company history, Super Rare has pushed the stock of this release up to 10k units.

Pre-orders for A Short Hike, which includes two versionsm will open on Aug. 25th, 2022, so mark your calendars! If you want to get more info on each version, you can read details below.

First up, a standard edition will be released that includes all the current content on its game card, a full-color manual, interior artwork, an A5 pocket-style mini-map, an exclusive sticker, and trading cards. This release is priced at roughly $36, and there will be 4,500 copies to go around.

For those wanting something a bit more special, a Collector’s Edition is also in the works. This will include a 46-page retro style guidebook of Hawk Peak, 4 sticker sheets of the Flora and Fauna found on Hawk Peak, a poster-size retro style fold-out map of Hawk Peak, all held together by a Short Hike Belly Band. Fans will also receive a Claire pin badge, 3 postcards, and the beautiful OST composed by Mark Sparling. This version is much more limited, as there will only be 1,500 units available. The Collector’s Edition is priced at roughly $94.