A look at how it all begins 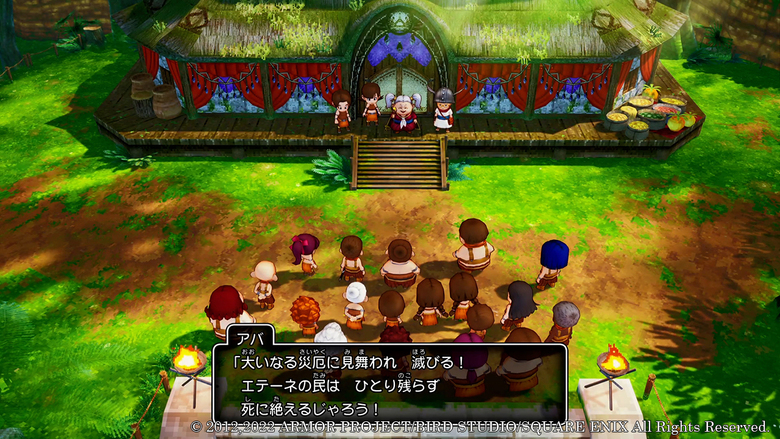 Another week, another round of details on Dragon Quest X: Rise of the Five Tribes Offline. This time around, Square Enix brings us details on story details from early in the game, along with some character profiles. You can see the breakdown below, as translated by Gematsu.

A new batch of screens has also been released, which you can sift through via this link.

■ The Characters You Encounter at the Beginning of the Story

Your adventure in Dragon Quest X Offline starts in the human-inhabited village of Tenton. The protagonist is a young person born into this village, living out a peaceful everyday life with their curious sibling.

At the beginning of the game, the player can choose a name and appearance for their sibling. You can even choose the “Adult” body type to have them be their older sibling.

One day, the village priestess Tenda tells the villagers of a terrible prophecy: “The village will soon be destroyed by a Great Calamity.” To escape this “Fated Ruin,” Tenda tasks the protagonist with finding the “Flowers of Tenth.”

The priestess of Tenton village and grandmother of Singh. She is able to hear the Galapagod’s prophecies.

A guardian deity that has watched over the village of Tenton for 1,000 years. It looks like a huge turtle.

A mild-mannered young man who grew up in the protagonist’s home village. He takes great care of his grandmother, the village priestess Tenda.

In order to save their village, the protagonist, Tenda’s grandson Singh, and the protagonist’s sibling set off in search of the legendary spirit plant known as the “Flowers of Tenth.”

Awaiting the protagonist and company when they return is a Tenton engulfed in flames by Nelgel the Netherlord. Unable to fight back against their “Fated Ruin,” the protagonist dies. However, a mysterious power guides their soul and reincarnates them as one of the five races… And so begins your grand adventure to unravel Nelgel’s plans and regain your human form!

The Netherlord who wields a huge sickle. He barges into the village of Tenton with a a troop of monsters in tow.