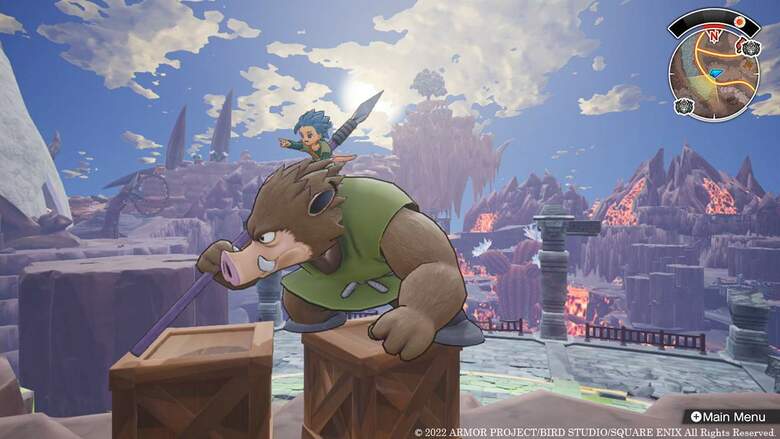 Square Enix has released a new round of screens and information for Dragon Quest Treasures. In particular, monster recruitment is detailed, and Fortes (monster special abilities) are explained. You can check out the official batch of screens here, and the full breakdown of mechanics below.

In Dragon Quest Treasures, you take control of siblings Erik and Mia, who are transported to Draconia—a mystical land full of hidden treasures, and populated by multitudes of monsters.

If you’re to have any hope of finding treasure, you’ll need to enlist the help of the locals! Luckily for you, many monsters are more than willing to team up and let you put their unique abilities to good use.

Monsters roam the floating islands of Draconia, and they’re known to attack hopeful treasure hunters on the lookout for loot. Once defeated in battle by Erik and Mia, however, some monsters may take a shine to the siblings and ask to join the gang.

Not only can these monsters help you locate treasure, they’ll also prove their worth on the battlefield as well. As your team grows in number, so too will your aptitude for adventure!

Here’s how you add new recruits to your gang:

A monster draws near! After you defeat it, you might just see a message informing you that the monster has been scouted.

Back at base, you can view a list of all the monsters you’ve managed to scout during your forays into Draconia.

They may want to join Erik and Mia’s gang, but these monsters won’t do so for nothing.

Once they’ve received the items they require, though, they’ll happily sign up as official members!

Each monster you recruit will be given a rating, indicated by the color of the frame around its portrait. The frames can be bronze, silver, gold or rainbow-colored. Monsters with a rainbow frame are the rarest—and also the most difficult to recruit.

Before you bring a monster into the gang, you can view its attributes, resistances, traits, favourite treasures, abilities and more to make sure it’s the right fit for you.

Some aspects, like resistances and treasure capacity, are the same for all monsters of a species, but each monster is also unique in certain ways.

Some monster species can carry more treasure than others, and each one has a different area of expertise. So if there’s a particular type of treasure you’re after, or a certain area you want to explore, try switching up your party to see what’s possible!

As word of Erik and Mia’s exploits spreads, some monsters will apply to join the gang of their own accord. As you collect more treasure and prove your skills, the monsters will surely start flocking to your base!

During the story, you’ll meet some monsters who want to join the gang out of sheer enthusiasm. These special friends are unique in appearance and name. Oozabella, a cutie slime, is the first friend Mia makes after landing in Draconia. She’s never seen without her adorable yellow ribbon.

A wide variety of monsters call Draconia their home. Some will be familiar, but others are completely new to the Dragon Quest series. Let’s take a closer look at a few of them.

A desert-dwelling slime. All the sand it swallows builds up inside its body to form a beautiful, stratified pattern.

An adorable dragon that inhabits lava-filled caves. It may look cute, but it spits out jets of burning breath when angered.

When this legendary beast appears it means a storm is not far behind. Its fur stands up straight due to the strong electrical current flowing through its body.

An airborne hunter that soars over snowfields. Its sharp, powerful claws can grip even the most hardened of icy cliff faces.

Exploring the World with Fortes

In Draconia, treasure can be found in every place imaginable, from the highest mountains to the deepest valleys, and even in the most unassuming of hiding spots. Erik and Mia will struggle to find it all by themselves… but fortunately, they have a team of monsters to call on when the going gets tough! Each monster has a special ability called a ‘Forte,’ which allows them to soar through the air or dive into the ground to bypass obstacles en route to the loot!

Here are all the Fortes you can use:

With the Launch Forte, monsters can propel Erik and Mia up into the air, allowing them to reach lofty ledges and platforms that are too high to climb to.

Monsters with the Glide Forte can use their wings or jet boosters to help Erik and Mia float softly down from high places or ride on air currents to reach distant areas.

The Sprint Forte allows for rapid traversal of the terrain. Each monster moves at a different speed and has a different level of stamina for carrying Erik and Mia.

With the Stealth Forte, the monster dives into the ground with Erik or Mia—perfect for passing through very low entrances and staying out of enemy sight.

When the Scan Forte is triggered, any nearby foraging points will be highlighted and the number of crafting materials available at each one will be shown.