Sail the high seas with your favorite kitties 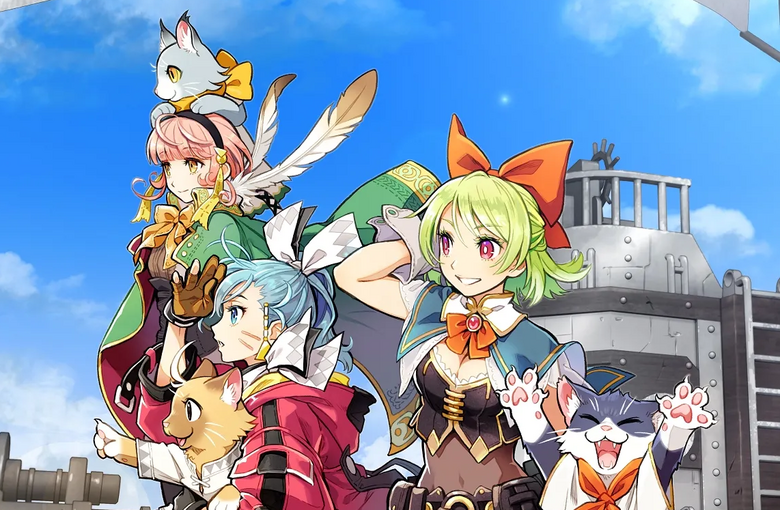 Just yesterday, we shared a preview from Famitsu magazine that revealed Buccanyar, a real-time strategy game for Switch that featured a trio of female protagonists, their cats, and a ton of naval action. Today gives us the official unveiling of everything that Buccanyar has to offer, and there’s a lot more to cover.

If you’re just interested in seeing the screens, art, and design sketches for Buccanyar, you can find the entire gallery right here. If you want to learn more about the game itself, you can get a complete breakdown below. Read on for story details, character profiles, gameplay mechanics and more, courtesy of a translation from Gematsu.

Long ago, the world suffered a great calamity and much of the land was submerged by the sea. While the beauty of the ocean remained, the creatures that inhabited it underwent strange transformations, and the people strongly rejected entering its waters.

The people lived on the little land that remained. Then one day, “it” appeared. It was a giant with large wings who shone a holy light on the world, later dubbed the “Light of Judgment.”

The light gave power to people and life. It was an awakening and evolution to all life. Not just people—but also cats, dogs, pigs, and other animals.

The world transformed. People joined forces with awakened animals and rowed out into the sea once again. This was the beginning of the “Age of the Blue Sea.”

At the time, the people living on the land used the few blue crystals buried beneath the earth to get by each day.

However, those who set out to sea discovered vast spoils of Blue Crystals at the bottom of the ocean.

And so the Age of the Blue Sea blossomed, and the people set out to sea in search of Blue Crystals.

Meanwhile, guilds began to form among those who set out to sea. Organized mining by the guilds led to a stable supply of Blue Crystals, and a stable civilization…

Our story begins in the midst of the flourishing civilization in the Age of the Blue Sea.

An exploration adventure and sea battle game set in an oceanic world. Three protagonists (heroines) and their crew of evolved cats set out on an adventure aboard their own ships. Explore unknown areas of the sea and engage in battle to open new routes while customizing and upgrading your ship. Combine a wealth of parts to build a unique ship all your own. A mysterious “god,” monsters, unique pirates, and more appear in this epic story about the mysteries of the world.

The Galetta is a small boat with a rare, double-decker spirit furnace. Though a bit old, it is a revered boat left to you by your father. And following in that father’s footsteps, the three heroines’ adventurous journey aboard the Galetta begins.

Guilds, pirates, monsters… overcome the obstacles that stand in the three heroines’ way, open new sea routes, and move forward on your adventure. Even if it gets hard, everything will be alright as long as the three heroines are together.

You, the player, will choose one of the three heroines and start the story. With the heroine you chose as captain, you will take command in numerous fierce battles.

Become the heroine and guide the girls and their crewmembers to the end of their journey.

Each heroine has their own unique abilities, and how you fair in battle will fluctuate according to each one’s abilities, so taking advantage of those abilities is the key to victory.

Buccanyar consists of two major gameplay parts. Control your own ship with a crew of AI cats, go on an adventure, and battle against other ships and sea creatures in Voyage Mode; and customize your ship, recruit new crewmembers, and buy and sell resources and other materials obtained in battle in Harbor Mode.

Voyage Mode is the heart of Buccanyar, and the voyage routes (stages) that appear in succession as you progress through the story and clear stages are infinitely generated through the combination of random elements.

■ Key Feature #3. Explore the Infinite Ocean with Your Own Ship and Crew

Sail the seas with a ship all your own. But first, gather your crew. It all starts from there. After recruiting your sailors, set out to sea.

Sailors are evolved cats. They are reliable (?) subordinates, and each one has a different appearance and personality depending on their breed.

The captain moves the battle forward while controlling the ship and issuing commands to the sailors.

Breeds of Sailor Cats that Appear in the Game

■ Key Feature #4: Upgrade and Customize Your Ship with a Wealth of Parts

Ships can be gradually upgraded. You can also create your own ship by combining parts such as cannons, small guns, and various other equipment. Additionally, after setting sail, you will be able to engage in various collection-based mini-games such as fishing and extraction.

Some of the Ship Building Parts that Appear in the Game

Arm weapons demonstrate their power at close range. The game features various unique weapons such as iron claws, grinders, and drills, so equip them to gain the upper hand the battle.

Build your own ship with a wealth of armament and hull parts!

■ Key Feature #5. Battles are Based on a Tower Offense System

The battles of Buccanyar are based on a real-time strategy system called “Tower Offense.”

During battle, the player will automatically attack by a combination of the armaments equipped to the ship (gun turrets, torpedoes, etc.) and the sailors assigned to those armaments, while steering the boat when the situation calls for it, and issuing commands such as “Volley Fire” and “Concentrated Attack” to carry out operations and attack intervention.

This is a battle style that makes it possible to achieve results that exceed basic performance by getting an overhead view of the battlefield, properly allocating armaments and crewmembers, and issuing the appropriate “commands” depending on the enemy type and situation.

Semi-automatic battles in which you intervene with the proper steering and attack commands while fighting with the appropriate combination of the ship’s equipment and sailors.

The timing of when you choose to introduce expendable weapons such as air balloons, airships, and submarines is also important.

The voyage routes (stages) that appear in succession as you progress through the story and clear stages are infinitely generated through the combination of random elements.

Additionally, the points on the map are generally divided into the following three varieties, each with a different role:

When you pass a route for the first time, a battle will occur, and once it is cleared, the route can be passed / fast-traveled from the world map.

Additionally, rare events may sometimes occur on already cleared routes, such as monsters appearing and leading to battles, or events that lead to the discovery of sub-routes.

A place that you can visit repeatedly to earn EXP or obtain items. Some places can also become a hunting grounds by defeating the sea area boss.

A place for fishing, mining, and so on. While rare, an enemy may suddenly attack while fishing. Quests to escort mining ships may also occur.

A shipwright in the making, she is a ship expert who can tweak everything from structures to spirit furnaces.

That being said, Canna is still far from becoming a full-fledged shipwright, and she devotes herself to training and hands-on work everyday in order to get there. She has a sloppy personality (“laid back,” to put it more nicely), and while working on ships, she often makes mistakes because of her “if it works it works” mentality.

A bombardier in this world is an occupation that controls the armaments equipped to a ship to repel enemies. Alicia is a bombardier full of spirit. Even her rough edges are charming. Although a bit tactless in her personal affairs, her artillery abilities are top-notch. Her abilities as a bombardier are both subtle and strong, allowing her to fire with high precision and even hit targets out of range.

Buccanyar will be the focus of the SUCCESS Corporation booth at Toyko Game Show 2022 from September 15 to 18. The booth will feature three demo kiosks to play an in-development version of Buccanyar. Additionally, visitors will be able to take a photograph with professional cosplayers Elly and Yu Akiyama, who will be wearing a costume of Canna (one of the game’s heroines). Users who play the game at the booth or take a photograph at the booth on an event day and post it on social media can also take home Buccanyar-themed pins or a shoulder bag (the latter is limited to those who defeat the Tokyo Game Show 2022 demo boss).