Nintendo shares a detailed map of the world of Splatoon

Nintendo has it all mapped out 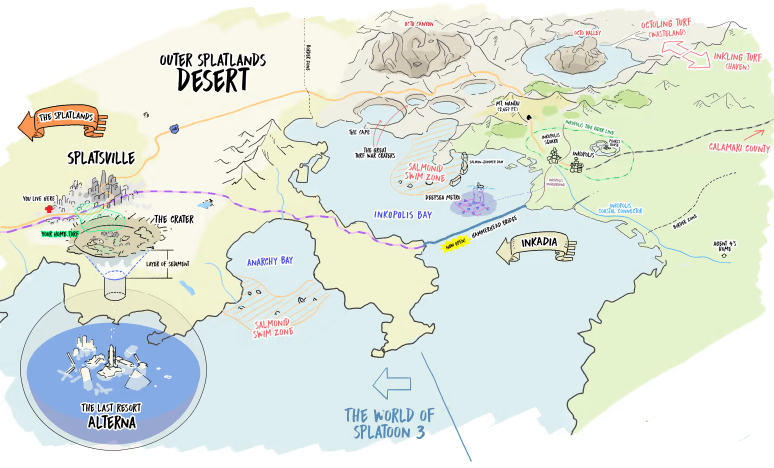 Nintendo obviously puts a lot of thought into the Splatoon series, but their attention to detail may go even deeper than you expect.

In a new ‘Ask the Developers’ feature from Nintendo, the Splatoon 3 dev team opened up about the new location players get to visit in this threequel, the Splatlands. This isn’t some random part of the Splatoon world, as Nintendo has thought about where the Splatlands are in relation to other areas seen in Splatoon. They’ve even put together a map for reference during development, which you can see above.

In the blurbs below, you can see Seita Inoue and Shintaro Sato elaborate on how the distance between the Splatlands and previous Splatoon locations has impacted the look and feel of the landscape.

Sato: Yes. We created a tentative document that gives us a sense of distance between the three cities and discussed the positioning and background of the three titles.

Inoue: As you can see, Inkopolis Plaza in the first title and Inkopolis Square in the second title are both located in the heart of the city, and they are only about as far apart as Shibuya Station and Harajuku Station on the train in Tokyo. In terms of distance, it is about 1.2 kilometers (approx. 0.75 miles). However, we were discussing how we wanted Splatsville to be set in a region far away from the locations in the previous two titles and with a completely different climate. We prepared a map like this so that we could develop the game with an understanding of the geographical distances.

Sato: Splatsville is barely accessible from Inkopolis Plaza and Inkopolis Square by taking a single local train line. The distance is similar to that from Tokyo to Atami or thereabouts in Japan. It is in a rural area that would take a few hours to drive to on the highway. For people in the United States, it may be like driving to Las Vegas from Los Angeles. Although geographically quite distant, highways that opened up in the five years between the second and third titles allow convenient access to the area.

Inoue: The Splatlands developed rapidly because the construction of the bridge across the sea made it more accessible from the city center.

Sato: While Inkopolis, the setting of the previous titles, was a fashionable and youthful area, the Splatlands, where Splatsville is located, is much more spacious, open, and full of nature. A place like this, far from the urban center, became popular after the final Splatfest and developed rapidly. For example, Scorch Gorge is a stage in a national park with strangely shaped stone pillars lined up.

You can see a spectacular view if you look around from the air with the new action, Squid Spawn. Also, Undertow Spillway is a huge spillway that used to be in operation but has been neglected and dilapidated over the years. The place has recently been renovated as a battle stage and is starting to catch on.