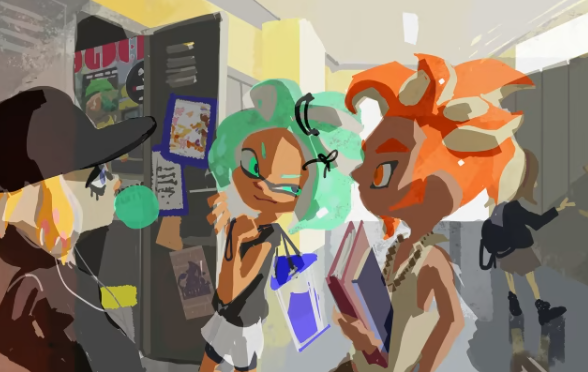 The Splatoon franchise is obviously greatly inspired by pop culture, but that’s not the only area the devs focus on when creating a new installment. It turns out their personal experiences have greatly influenced the franchise, especially with Splatoon 3.

In an ‘Ask the Developers’ feature, Nintendo dev team opened up about the impact their childhood experiences had in crafting Splatoon in general, as well as Splatoon 3. You might be surprised with just how much was pulled from their early days and applied to the world of Splatoon.

In the snippets below, developers Hisashi Nogami, Seita Inoue and Shintaro Sato all share insight into how their childhood experiences helped pave the way for content in Splatoon 3, and Splatoon in general.

Inoue: Weapons in this game are sometimes inspired by items we used to play with growing up. For example, the Splat Brella weapon was inspired by my childhood memories of play-fighting with umbrellas.

Another good example is stationery. When I was in elementary school, some kids had very elaborate and high-tech-looking pencil cases that were popular in Japan, and I was envious of them. A weapon, Triple Inkstrike, was inspired by these pencil cases.

Inoue: As Nogami-san mentioned earlier, Turf War battles are considered a sport in the Inkling world. So, we thought it would be realistic and interesting if each player had their own locker and could decorate it as they liked by arranging their weapons and items. Looking back on my high school days, I remember the passing moments I spent in front of lockers during breaks more than the time I spent studying in class.

Nogami: The inside of a locker can tell you a lot about the person who owns it.

Inoue: I agree. A person on a baseball team might have a baseball bat in their locker. Someone who loves to read might have many books. We wanted to recreate in this world the idea that the contents of a locker represent the owner themselves, so we’ve made it possible for players to arrange their favorite weapons and items that they’ve collected in the game however they like.

Sato: Some people might leave their locker a mess, while others may keep things neat and tidy… I’m sure the lockers will represent the unique personality of each player.

Nogami: I think the same is true for office desks. (Laughs) You can also see what’s inside other players’ lockers, and I thought this would be interesting because you get an idea of what kind of person the owner is by seeing their locker. For instance, if you see shoeboxes of various brands in the locker, you would think that this person must really love sneakers.

Nogami: Cards are fun just to collect, right? (Laughs) I was really into collecting cards as a child, but in this game, cards are not only for collecting. They can also be used in Tableturf Battle to play games.

Inoue: Card games have recently gained a lot of popularity in the Inkling world. We thought this kind of hobby feature would make the world depicted in this game more convincing. The cards were all drawn by members of the development team, who are good at drawing this type of illustration. I like chibi character designs because they were popular in my generation, and we thought cards used for card games often had this kind of design.

Sato: I believe that players will also feel nostalgia when they see this kind of homage to things we were all obsessed with as children.

Nogami: I believe that each person’s personal experiences, happy memories from childhood, hobbies and skills lead to the variety of elements contained in the series.